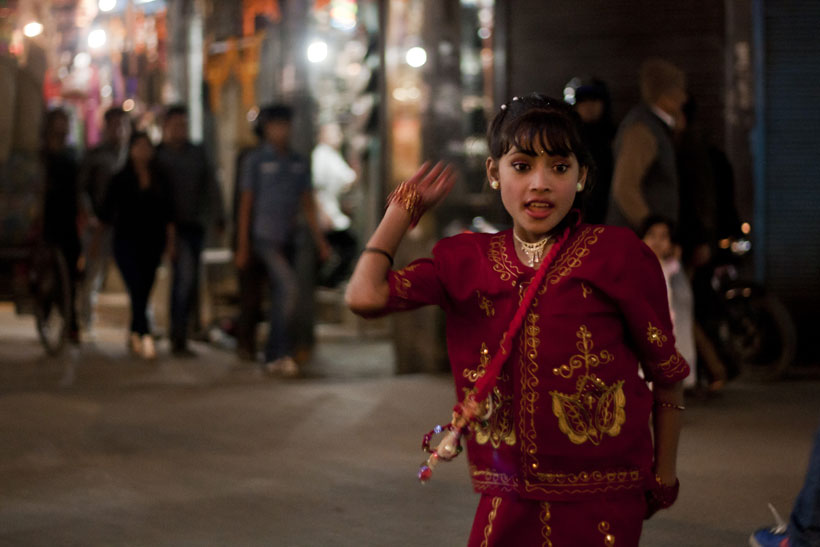 When we were kids, we would be up till midnight playing deusi-bhailo around the neighborhood.  We would go to each house and sing a few songs and they would give us sel-roti, masala and a hundred rupees. Well, some gave only ten rupees but it was never about the money. We were just happy to get out of the house and be with our friends till late hours. We didn’t have mobile phones then and our parents had no choice but to hope that we came home by 10 pm.

When we were teenagers, the simple deusi-bhailo songs gave way to pop songs both Nepali and English. You could hear a group of teenagers doing their best to sing Sanjay Shrestha’s ‘Maya Meri Maya’ in one house while another group would be belting out one of Guns N’ Roses hit songs. We still didn’t have mobile phones then. And our parents had no choice but to hope that we came home by midnight or if not that we were safe and sound and not inside a police station or causing trouble in the neighborhood.

You could buy firecrackers at any store and not worry about the police harassing you for having some fun. You had the ‘Aloo’ bomb and it would make a loud noise and scare the unlucky person who happened to be right next to the ‘Aloo’ when it went off.

But then things changed. If you were up and about late at night, the police van would stop and shout ‘Oye Maobadi’ and come after you. You didn’t even know what being a ‘Maobadi’ meant. In the name of security, the government started clamping down and firecrackers were banned and late-night celebrations during festivals came to an end.
Now the Home Ministry wants all of us to shut down our deusi-bhailo programs by 10 pm.

And we still haven’t been allowed to use firecrackers for more than a decade.
Our neighbors India and China do not ban firecrackers. The public is allowed to celebrate their festivals all night long and you can use firecrackers during such festivals, weddings, and other ceremonies as well. Our government tells us that it bans firecrackers and all-night celebrations for security reasons. Yes, let us all congratulate our government for finally thinking about public safety even if it’s for at least one day in a year.

But if you are having a house party that continues till midnight and somebody complains to the police, don’t be surprised to see a police van in ten minutes and the police personnel banging on your gate. But if you call the police to complain about the disturbances caused by dance bars or dohoris in your neighborhood, they will not show up at all.

Instead of trying to place a curfew on our festivals, the government should mobilize adequate police personnel to maintain law and order during such times. The government should tell us that we should all celebrate responsibly and not create problems. If you are having a good time and not disturbing the public then it should not be much of a problem for our cops who patrol the streets. But if you are being rowdy and trying some wrestling moves on others then our cops should arrest such hooligans.

But our cops do not seem to care when it comes to figuring out who is disturbing the peace and who is having a good time. If you are a foreigner then you can walk around drunk and sing songs and wake up the whole neighborhood. The police will just laugh and let you go home. But if you are a Nepali and you are neither drunk nor singing any Kollywood songs late at night as you walk in your neighborhood, don’t be surprised if the police van suddenly screeches to a halt and cops come out as if they are after a terrorist. You may be a restaurant worker coming to your rented room after finishing your shift but be prepared to face insults from the cops.

It’s a shame that we Nepalis have to face such harassment in our own country. At least in the West, the cops don’t care if you were a citizen or a foreigner. If you are drunk and disturbing peace, you spend a night in jail no matter how much money you have or if your father is a politician or some thulo manchey. I’m even sometimes surprised to see foreigners drunk in restaurants and then they come out and get into their blue-plated vehicles and drive off while a police van sits quietly without even telling the restaurant owner who is also a foreigner to shut down shop even when it’s past 11pm. But if it were Nepali restaurant owner then either he has to pay off the cops or get beaten up and spend a night in jail for breaking the so-called laws of the land.

We will know that peace has finally come to this land and our government has changed for the better when we are allowed to use firecrackers during festivals, weddings and other ceremonies. We will know that we have civilized cops and they are doing their jobs right when people are not harassed on the streets at night and when a drunk foreigner is not given a free pass and gets to spend a night in jail if he breaks the law and spends the night chatting with a sober Nepali guy who is in jail for no apparent reason.

YANGON, Feb 9: Myanmar’s new military rulers on Monday signaled their intention to crack down on opponents of their takeover,... Read More...

KALIKOT, Dec 24: The curfew which was lifted for two hours in the morning has once again been imposed at... Read More...

Disgruntled faction of CAN seeks resignation of executive committee, issue related to Sandeep not discussed
16 hours ago