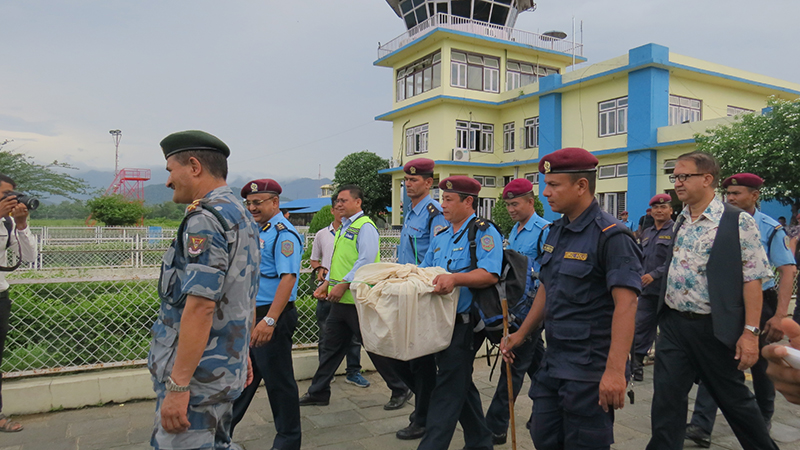 KATHMANDU, June 27: Chief Returning Officer in Bharatpur Metropolitan City on Tuesday furnished the torn ballot papers of the ward number 19 of the metropolis to the Supreme Court.

The Supreme Court earlier on June 20 had asked the Election Commission to furnish the torn ballot papers and the minute of its decision of re-voting in the particular ward of the metropolis.

As per the court order, the Chief Returning Officer in the metropolis reached Kathmandu on Tuesday morning in a flight and furnished the ballot papers to the court at around 9:30 am.

A writ petition was filed by UML candidate in Bharatpur-19 Gunjaman BK and two advocates, challenging the EC decision to hold a re-election in the ward.

The election in Bharatpur was in the limelight as then prime minister Pushpa Kamal Dahal's daughter Renu was the alliance candidate with support from the Nepali Congress (NC).

The ballot papers were torn when Dahal was still 733 votes behind with 1,809 ballots in Ward 19 counted and ballots from only one more ward left to be counted. CPN-UML candidate Devi Gyawali was leading the vote count.

Following the incident, the Maoists demanded a re-poll but UML insisted on continuation of the vote count. The EC's decision on the incident caused further controversy. Two days after the decision the SC ordered a halt to the poll process until a final verdict.

CHITWAN, June 1: District Election Office, Chitwan has confirmed that 90 ballot papers were torn up during the vote counting... Read More...

Import of electricity from India starts, export stopped
31 minutes ago