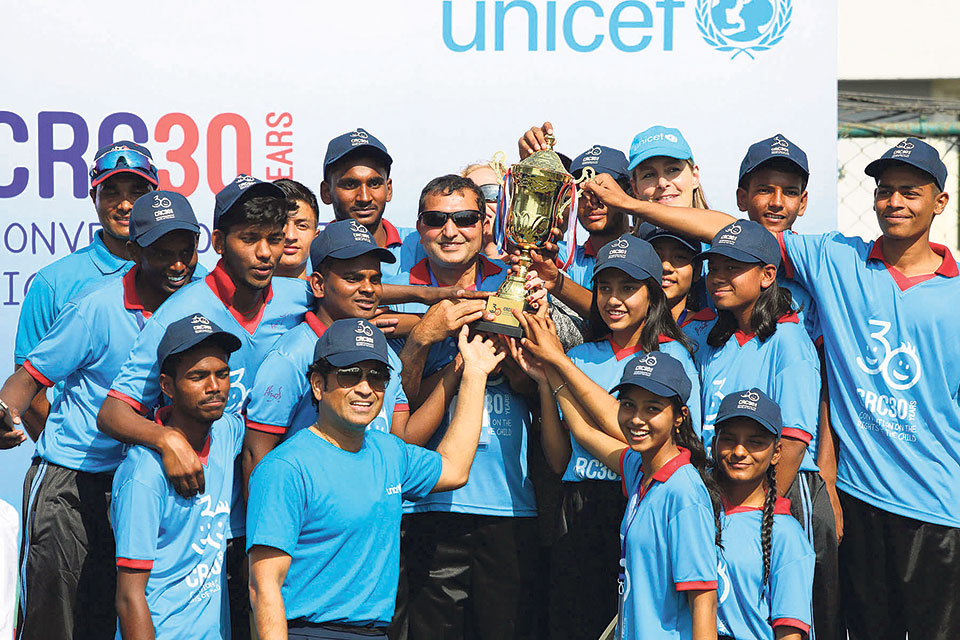 Cricket legend Sachin Tendulkar poses for a group photo with children at TU cricket ground in Kirtipur after a charity match on Saturday. Photo: Rss

KATHMANDU, Nov 17: Cricket legend Sachin Tendulkar believes that sports is the best medium for children to express themselves. Speaking at a charity match held at the TU Cricket Ground in Kirtipur on Saturday, Tendulkar shared that sports made him focused and disciplined in life.

The program was organized by United Nations Children’s Fund (UNICEF) to mark the 30th anniversary of the ratification of Convention on Children’s Rights Convention (CRC30).

“I was a very naughty child. I was a prankster. Then my parents diverted me to sports where I could express all my energy. I became focused and disciplined.”

The 46-year-old is arguably the greatest player to ever play the game (cricket).

Tendulkar urged the parents to try to better understand the strengths of each child, eat, play and laugh with them more, and support them in doing what they love.

“Don’t clip their wings, let them fly,” he said, adding, “Shouting, hitting, screaming is not good. We all should try to understand them. If you will not allow them to fly, they will not achieve anything in life. You should have patience.”

Tendulkar, who started his cricket career at an early age of 16, shared how his parents helped him realize his true potential and be the ambassador he is for young kids.

“I had a freedom to be what I wanted to be in life not what my parents wanted me to do in life. It is important to understand your child, encourage them and support them. But with freedom comes responsibility,” he added.

He further stated that his son, Arjun Tendulkar, who is also pursuing a career in cricket, decided to play cricket on his own.

Tendulkar, who has the most runs and centuries in ODI cricket, said that striving for success is the only way a sportsperson can keep growing in his career.

“Even the best in the world continues to get better. It is not about how long one should practice. Don’t look out on your watch. Just practice until your heart is satisfied.”

Similarly, he wished good luck to Nepal women’s national team for the preparation for the upcoming 13th South Asian Games. “Be fearless, not careless,” he said.

Tendulkar, who has 100 centuries in international cricket, led a team against Nepal’s former cricket team captain Binod Das in an 8-over per side match participated by school children in both sides.

MCC should not be passed under any circumstance: Gajurel
54 minutes ago