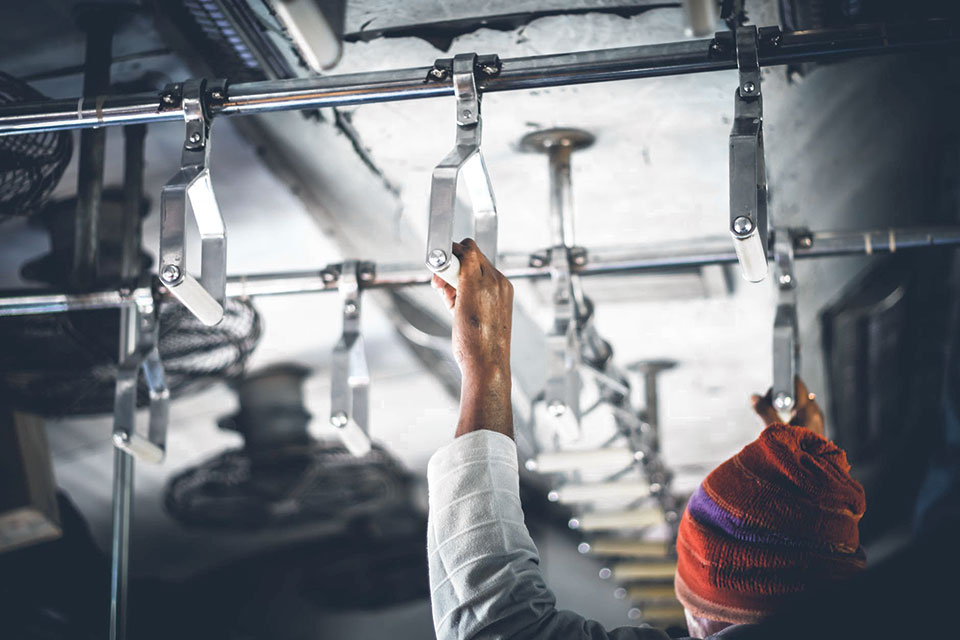 When my parents call and tell me that they can’t pick me up in the evening and I will have to manage on my own, my heart sinks. I swing into full combat mode, prepare my lungs to take on extra volume of oxygen, and give myself a pep talk because I will have to take a bus ride home and that too in the evening. The vehicle arrives at the bus stop already bent, like the leaning tower of Pisa, where there is little to no space but still the drivers see to it that they stop the bus for at least 15 minutes and fit passengers into the quantum realm i.e. they expect other passengers who are already there to turn into antmen and antwomen. Or at least that is what it seems like they want to do, considering how they stuff people into the vehicle like one stuffs “gundruk” in a glass jar.

The tale of packed vehicles is an old one. Everyone knows the condition of our public transport. We know for a fact that when we get into a public vehicle, it’s going to be fight for life. We have all seen the crammed and bent buses, micros and whatnot running in the Kathmandu streets, which are already too narrow to begin with. While the numbers of cars and bikes are alarming for a city of this size, public transportation which is the most frequently used mode of transportation by the Nepali public is scarce, and not remotely enough to fulfill the need of all its users.

Furthermore, places like Ratnapark or Kalanki are the only few places where you can get vehicles for most places you want to go to. Otherwise, it’s switching from one vehicle to another as well as getting dropped off at the wrong places. Why is it that such little attention is given to public transportation? Most vehicles smell and are suffocating, the seat covers are tattered and torn, and the vehicles creak and squeak as they race with one another. One has to be covered from head to toe before one enters the vehicle.

And the worst thing is that the vehicle is treated as a vessel that can contain unlimited number of people. The driver and the conductor make sure people are packed in like sardines. However, it isn’t just the drivers and the conductors either. People climb into the vehicle despite it being already full. They are okay till they have a place to hold onto and get about five percent leg space. But one could argue that people don’t want to get home late or, that for them it is a more of a necessity rather than a choice. But still, one has to draw one’s boundary somewhere. I think the boundary is met when I’m crammed into a bus with what seems like a million people, all leaning over me like living room cushion and when oxygen becomes a privilege only for those lucky enough to be seated or have their face plastered against the windows.

Let’s not even begin talking about man as well as woman spreading. I don’t think I’m the only one rolling eyes at the person sitting beside me, with their legs spread, their elbows nudging my stomach and invading my personal space. It’s the same while standing. The constant “Didi/Dai, shift a little!” by the bus conductor is vexatious to say the least, but when a person who wants to get off at a bus stop ‘literally’ wants to split your standing body in half or pushes his/her body against you, it’s like adding fuel to the fire. However, I can understand how people have to rush to the door as the bus rarely stops for you to get off but an “excuse me” would prepare us fellow passengers for the tragedy that is about to unfold.

Moreover, there is always a patriot midst the mob, he/she is the very person to get in after the vehicle is full but is critical of how the drivers and conductors run the bus and, of course, the government for all the problems of life. A loud, meaningless lecture is hardly what one wants to hear on a normal day, but on a crammed, smelly and dark vehicle, it is the worst fate one could possibly imagine.

Of course, asking for clean seat covers or cleaner vehicles or even just a seat for that matter is far-fetched but aren’t we all worthy of a comfortable stand while going someplace? But no proper complaints have been made so far about the situation. And if they have been made, they haven’t been effective enough to put a stop to this practice. It’s as though we have accepted this fact. We are numbed by the normalness of it all. People don’t realize that public vehicles too can be a comfortable and safe mode of travel, like in other places in Nepal like Pokhara or Birgunj.

It is this commuting problem that makes me want to never go out on a Saturday because the dread of using public transportation is greater than the excitement for the next ‘Marvel’ movie. It’s hard to pinpoint where it all went wrong, but it’s the attitude of everyone involved – the drivers, the passengers and also the roads (be it their narrowness or mismanagement) that have made public transportation such a struggle.

Smart lockdown to be enforced, int’l flights to resume
17 minutes ago