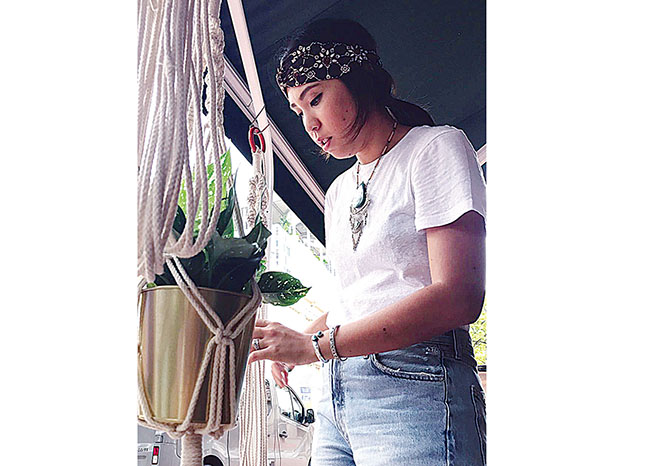 Since last year, she has started working closely with Nepali artisans after having done a fair bit of research. Thanks to her interest in all things craft, she believes it was only natural for her to explore the local craftsmanship scene after moving here

Dora Aljoofri, founder of Hang with Dora, a company that sells handcrafted items like plant hangers, nanglo wall decorations, and tassel bag charms to name a few, worked in the publishing industry (writing about fashion) for over a decade before making a career change to full-time crafting and freelance writing.

Originally from Singapore, Aljoofrimoved to Nepal a little less than three years ago and she says she never had anything planned out. All she knew was that she wanted take a break from work and discover a new place. She says she wanted to first adjust to a new place and then learn about the local culture. Hang with Dora happened quite organically. It was never intentional.

“There was never a plan to start Hang with Dora. When I moved to Nepal, I decided to take a break from work and I had all this free time that I rarely ever had when I used to work back in Singapore,” she says adding that this allowed her to pick up crafts that she had always wanted to try.

So Aljoofri started learning different kinds of crafts, mainly focusing on macramé (which is the art of knotting string in patterns to make decorative items). Her interest in making crafts was solely based on her wanting to have some fun while learning how to make all kinds of things. “For example, during the spring after I moved to Nepal, the flowers blooming around me inspired me to work on some plant hangers,” she explains.

Aljoofri believes that to master any kind of skill you require religious practice and so she kept on making plant hangers till she got better at it. This resulted in a lot of plant hangers that she gifted to family and friends. “My friends in Kathmandu loved the plant hangers and they encouraged me to try selling some at the art market held at The Yellow House. I didn’t see any harm in trying and I gave it a go,” she explains. She adds that the response was overwhelmingly positive, especially from friends back in Singapore. In no time at all Aljoofri says she started receiving orders from Singapore. This took her life as a crafter to a whole another level.

“I started out making macramé plant hangers for my first two pop-up stalls in Singapore, and have since expanded to bags and customized wall hanging pieces,” she says. It’s quite evident that Aljoofri’s background in fashion inspires her designs. She adds that she is also hugely inspired by her environment and people who surround her. “People have a huge influence on how I come up with my designs. I find it especially challenging when they expect me to bring something new to the table,” she says.

Since last year, she has started working closely with Nepali artisans after having done a fair bit of research. Thanks to her interest in all things craft, she believes it was only natural for her to explore the local craftsmanship scene after moving here. “Not only did I want to get to know the artisans, I also wanted to develop a solid relationship with them to truly observe and learn their skills,” she says.

Her products, as of now, are limited to the Singaporean market. “It’s my goal to introduce Nepali handicrafts in Singapore,” she says. However, she adds that she has also made some products for friends and people in Nepal who have contacted her and requested for it. “I’ve been pleasantly surprised and humbled by the requests coming in from Nepal asking me if they can purchase some of my products,” she reveals adding that, for now, if anyone in Nepal wants to purchase Hang with Dora products they can message Aljoofri through her Instagram (@doraljoofri).

For Aljoofri, Hang with Dora has been and always will be something she does for the love of crafts and making things for people she values. “I put my heart and soul into what I do so that it can have meaning and add value in some way in someone’s life,” she says. And so, she feels a genuine sense of joy when she sees the reactions of customers after receiving her products. This, she says, makes her work all the more special.

However, working in Nepal as a crafter is not always easy. For her, duplication of her designs has been one of the major setbacks. “I’ve worked with artisans who have taken my designs, made them at sampling stages, and sold it to someone else, or as their own,” she reveals. “This made me realize that trust is an important aspect of any kind of work and collaborations.”

In the future, she hopes that Hang with Dora continues to grow and becomes sustainable as a craft business. “I’m also looking forward to more collaborations with people in Nepal and Singapore. The bigger goal is to be able to work in both the markets and countries,” she says.

“We're always going to love each other”: Camila Cabello on Shawn Mendes

It is difficult to run hotels according to the prevailing policy: HAN
25 minutes ago