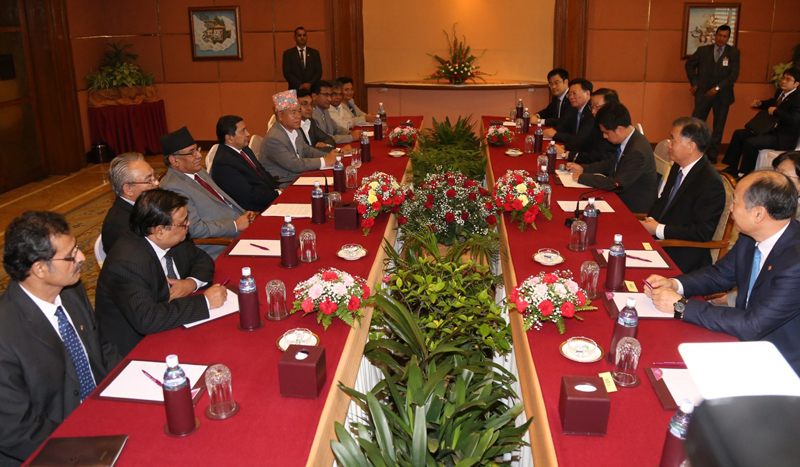 In a meeting with a high-level delegation led by Vice Premier of the People's Republic of China Wang Yang here today, the party pointed out the need for Chinese investment and technology for the development of Nepal, including through the belt and road initiative.

Talking to reporters following the meeting, the party spokesperson Pampha Bhusal said various dimension of mutual interest and concern were discussed. On the occasion, party Chairperson Pushpa Kamal Dahal urged the Chinese side to take the initiative to implement the agreements signed between the two countries during his premiership.
Sharing that the current coalition government including his party was working to hold the provincial and federal elections following the local elections to implement the new constitution, Chairman Dahal pointed out the need for support of the Government of China to Nepal and the Nepali people.

Chairperson Dahal expressed happiness over the significant cooperation received from the Chinese government in the area of physical infrastructure development put forth by the government.

On the occasion, Chairperson Dahal expressed confidence that further cooperation and investment would come from China in coming days, shared Spokesperson Bhusal.
Nepal is steering towards the path to political stability and his party has been effortful to push the agenda of economic prosperity of the country, Dahal told the Chinese delegation.

Vice Premier Yang said he was happy for the opportunity to visit Nepal and expressed the readiness of the Chinese government to cooperate for the economic development of Nepal.

He also expressed his confidence that the longstanding friendly relations persisting between the two countries would reach to a new height in the days to come.
The Vice Premier had appreciated the crucial role the Centre played for the development and prosperity of Nepal. The Dahal-led government had signed the 'One Belt-One Road' project.