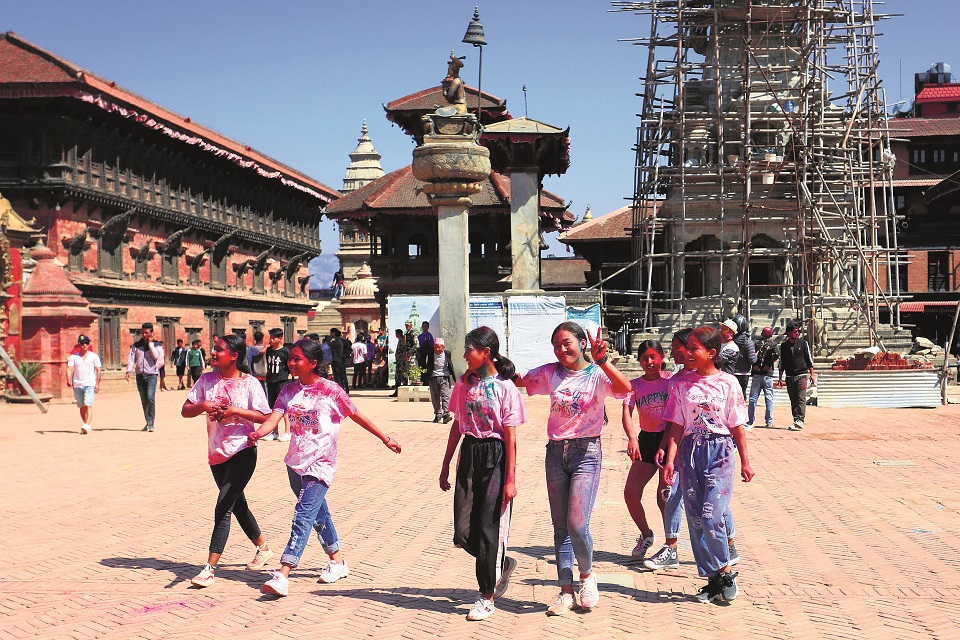 KATHMANDU, March 10: For 19-year-old Jiya Silwal, Holi has been her favorite festival since her childhood.  Silwal, now a student of Global College of Management, remembers going to events and live shows during Holi from the time when she was a school student.

This year, however, she followed a different practice as she had spent her whole day with her family at her home. “Me and my friends had booked tickets to join 'Color Republic'– an annual event organized to celebrate Holi festival in Gokarna – but we had to cancel our plans due to the fear of the coronavirus,” she said.

Silwal had to cancel her plans to join an event in Holi because the government had urged one and all to cancel group gatherings considering the growing fears of spread of the coronavirus. Amidst the growing fears of the rapid spread of COVID-2019 that started from Wuhan of China late December last year, Nepal government had instructed people to avoid gatherings and group meetings earlier this month.

As the deadly virus spread in more than 100 countries and the World Health Organization ranked Nepal as one of the high-risk countries, considering its further spread the government had instructed to shun Holi related activities in the public.   This led the Kathmandu denizens to live inside their houses with fears of the spread of the virus. More than 111,644 people worldwide are inflected with the virus which has caused death of more than 3,880 according to the details released by the WHO on Monday.

There were times when almost every street of the Valley used to be filled with people throwing colors and greeting 'Happy Holi' to each other. The narrow alleys of Basantapur, Patan, Thamel were major hubs for Holi celebration to most of the people in the Kathmandu Valley.

But coronavirus locked down many Kathmandu denizens. Few of them, however, came to the streets to celebrate the festival ignoring government calls. The numbers of people who gathered to celebrate Holi was a lot less than it used to be before, police and locals said.
Regular visitors to Basantapur on Holi explain that there was a drastic difference in the crowd seen this year.

“This is my fifth year celebrating Holi in Basantapur. The celebration here screams the vibes of this festival like no other. But this year it's quite different – there is a huge decrease in the number of people joining the celebrations,” said Laxmi Kunwar, a 23-year-old student from Basundhara. “It's crazy how the fears of the spread of Coronavirus have gripped us all. My parents did not allow me to come in here but I managed to come anyway,” she said adding “However, I am trying to avoid contacts with more people”.

Remembering how crowded and fun the alleys were seen last year, Kunwar mentions that she misses the vibe of one of her favorite festivals, but one thing she appreciates about this flux in the number of people adding up to the crowd –she felt safe in terms of physical consent and self protection.   “Last year my friends and I had to face drunken men trying to throw color and touch us in inappropriate ways. This year it's not the same, at least,” she shared with Republica.

The decrease in the number of people celebrating Holi has also hampered the business of local sales persons and vendors in the Valley. The shopkeepers selling T-shirts having Holi imprints and street vendors selling varieties of colors lamented the loss they had to face this year. “We sold about 3000-4000 pieces of T-shirts with Holi imprints last year, this year we could hardly sell 1000 pieces. It's a great loss,” said 21 years old Upakar Jaiswal who has a cloth stall in a street of New Road. “These pieces cannot be returned from where we got them, we will have to wait until next year to sell them,” he said.

Although Jaiswal had to face a great loss, his loss sounds dreary when compared to Niru Jhah's loss. Jhah, 43, is a street vendor who sells colors in streets during Holi. Although she manages her living selling hair clips and earrings at other times of the year, Jhah found selling varieties of colors during Holi to be an alternative to earn more. But little did she know things wouldn't be the same this year. “Last year I sold around 20 kgs of color. I bought 25 kgs of color this year but I could barely sell 7 kgs of color” she said. Jhah who sold the colors at a rate of Rs 30 per packet last year, had to sell them at a rate of Rs 20 this year as these colors cannot be stored to be sold next year. “Clothes can be stored to sell next year but it's not the same with colors as they come with an expiry date and will be harmful for use once they exceed the expiry date,” she said.

Police attribute to the coronavirus threat as a major reason behind the sharp decline in accidents during Holi this year. While there were dozens of major incidents and accidents reported on this day last year, there was no major incident or accident reported this year. “We had deployed about 2,500 policemen across the Valley this time but no major cases are reported. However, 56 people have been arrested for fighting or misbehave. This number was more than 300 last year,” said Hobindra Bogati, spokesperson for the Metropolitan Police Range, Kathmandu.

BHADRAPUR, March: A Coronavirus Help Desk has been established today at Chandragadhi Airport of Jhapa as a precaution measure against... Read More...

BEIJING, Feb 28: A viral outbreak that began in China has infected more than 83,000 people globally. The World Health... Read More...

Unlocking the lockdown
13 hours ago

Residents of Nabhi, Gunji and Kuti used to pay land revenue to Nepal until 2035 BS
12 hours ago

Residents of Nabhi, Gunji and Kuti used to pay land revenue to Nepal until 2035 BS
12 hours ago

How can we revive the energy sector post-COVID-19?
14 hours ago