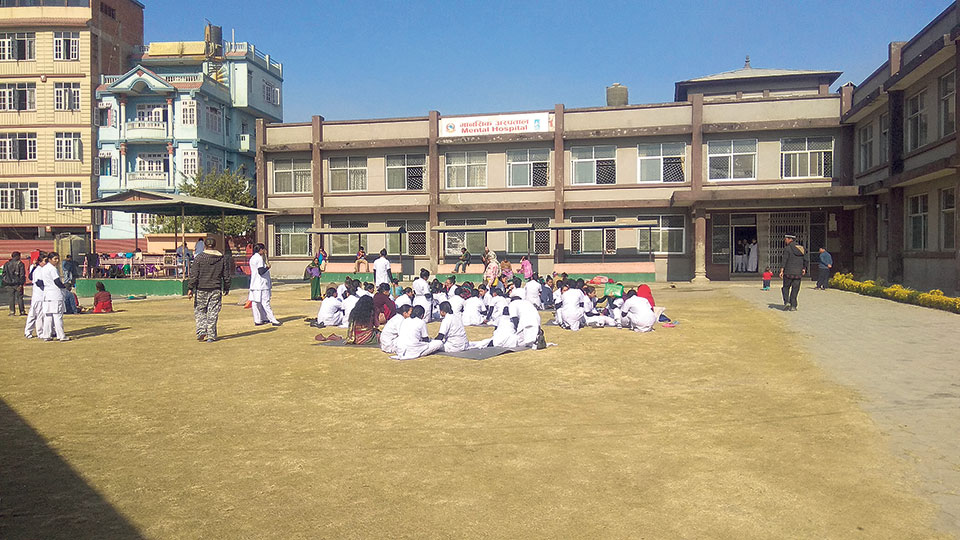 LALITPUR, Dec 24: Bir Bahadur Sunuwar’s brother Chandra Sunuwar started showing signs of mental illness during the last few years. Initially, the family from Surkhet tried to treat him through the help of shamans. But when that did not work, they went to a local health post. Officials there suggested them to take Chandra to a mental hospital. It would be very costly to come and stay in the only mental hospital they knew, Mental Hospital Lagankhel. However, since the patient’s illness was increasing by the day, it became very crucial for them to take it to the hospital.

“Since coming here, I have realized that it is not going to be so easy. The hospital which is supposed to cure mental patients is ‘mental’ itself,” Bir Bahadur said in an attempt to express the hassles he was facing at the hospital. “I had to face enormous difficulties to admit him here. One needs to have the backing of powerful people to admit a mental patient at this hospital. Otherwise, they simply deny admitting patients”

Gorakh Bahadur Bista of Kalikot also shared a similar experience. He is in Lalitpur since the last few months for the treatment of his son who suffers from mental illness.

“Getting to Kathmandu was not that hard. Hardship started after I reached the hospital,” he said. “If you are a common man, you have no use here, they turn you back straight away.”

After making rounds to residences of several politicians that Bista knew and winning over their backing, his son was admitted at the hospital. However, his struggles did not end there. “Everything is messed up at this hospital. It is overcrowded and unmanaged,” Bista elaborated.

When Bista asked the hospital to admit his son, the administration had denied admission stating that the hospital did not have a bed for him. However, the hospital admitted him due to the backing of politicians. Lack of bed has been one of the biggest challenges the hospital is struggling with. While patients from across the country seek treatment at this only mental hospital of the country, its infrastructure, equipment and human resources remain the same. “First we worry about admitting our patient. We put all our efforts to admit them. However, the real troubles start once you have your patient admitted. It has a shortage of everything, beds, human resources, and equipment,” stated Bista.

The hospital was established in 1984 and its administration is aware of the poor quality of services that is has been providing.

“It was established nearly four decades ago. Since then, the number of patients to visit and stay in the hospital have grown manifold. However, despite several attempts, there has been little to no growth in its capacity to attend patients,” said Dr. Ananta Prasad Adhikari, information officer, and chief consultant psychiatric of the hospital.

“We are providing services to patients with the same number of staffs, equipment, and infrastructure for a long time now.”

According to the administration, it is not the choice of the hospital to disappoint patients coming from remote areas. It is already so badly crowded that it can accommodate additional patients. However, when families of patients use political and other influences, the hospital’s administration is compelled to admit them. “Such forceful admissions make the situation even worse,” admits Adhikari.

Adhikar warned that the situation of the hospital is very critical and it may not continue to function for a long period.  “We have come to a point where we cannot provide treatment to the patients. We cannot run it this way for a long time. Additional infrastructure, human resources, and equipment must be provided at the earlier to keep the hospital functioning,” said Adhikari.

In recent years, there has been a dramatic increase in the number of patients with mental illness. While mental health is still an ‘alien’ subject to Nepali society, depression and low self-esteem among people have been reported as a rising problem.

“When you are not able to express your tensions, the pressure remains inside you and it begins to take a toll on your peace of mind or mental health. And if due medical support is not sought on time, it can turn fatal to your mental health,” Adhikari said. “But due to the lack of awareness, our people do not seek medical help on time.”

The hospital is stretched across nine ropanis of land. It is operating with the same number of staffs and doctors as it did 35 years ago.

“The number of officials working at this hospital are the same as they were 35 years ago when the hospital was established. However, the number of patients coming to this hospital for treatment has increased by many times since then. In such a condition how can this hospital provide quality services to the patients?,” Adhikari asked.

There are three beds in the emergency and 47 in the general ward. The hospital has government quota of having 47 staff members, however, these positions are never filled. “Right now, 23 quotas are empty,” said Adhikari. “But from the internal resources, we have appointed a few additional staffs,” he added.

The hospital record shows that it provided service to 36,745 patients during the last fiscal year.