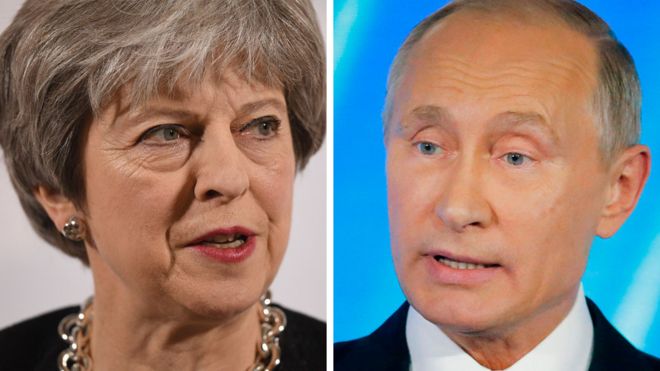 Mar 14: Fears are growing of a possible war with Russia over the poisoning of an ex-spy and his daughter after the Russian embassy warned the British government against taking “punitive” measures in its most defiant message yet. But could World War 3 break out over the attack on Sergei Skripal and his daughter Yulia?

Former spy Sergei Skripal, 66, and his daughter Yulia, 33, have been in hospital in a critical condition since March 4 when they were found unconscious on a bench outside a shopping centre in the English cathedral city of Salisbury.

The nerve agent attack has prompted international outcry and strained diplomatic ties between Russia and Britain.

The Russian Embassy in the UK today released a chilling statement informing Theresa May’s government that its continued condemnation of Russia will not be tolerated and any “punitive measures against Russia will meet with a response”.

Vladimir Putin’s government is refusing to meet the UK’s midnight deadline to give a “credible response” of how a Soviet Union-developed military-grade nerve agent was used to strike down former spy Mr Skripal and his daughter last week.

Russia has retaliated by refusing to co-operate unless it receives samples of the chemical substances used in the poisoning after Theresa May said Russia was either behind the attack or has lost control of its nerve agent stock. The Kremlin has denied any involvement.

Will war break out with Russia over Russian spy poisoning?

The Russian Embassy in the UK has already warned that Britain's Government is playing “a very dangerous game” and its war of words ramped up further today.

In a statement, the embassy said its ambassador Laurence Bristol had been “summoned” to the Russian Foreign Ministry where First Deputy Foreign Minister Vladimir Titov “strongly protested the evidence-free accusations”.

The statement from the Russian Embassy read: “From the Russian side, it was emphasised that Moscow will not respond to London’s ultimatum until it receives samples of the chemical substance to which the UK investigators are referring and until the UK demonstrates compliance with the Chemical Weapons Convention that stipulates a joint investigation into the incident, for which Moscow is ready.

“Without that, there can be no sense in any statements from London.

“The incident appears to be yet another crooked attempt by the UK authorities to discredit Russia.

“Any threat to take ‘punitive' measures against Russia will meet with a response. The British side should be aware of that.”

The embassy said it was also concerned that Britain was planning to launch a cyber attack against Russia and once again urged the UK to carefully weigh up the actions of “such a reckless move”.

The Foreign Office will issue a statement on the cyber attack threats tomorrow morning.

In a speech to Parliament yesterday, Prime Minister Theresa May said parliament stood ready to “take much more extensive measures”.

What are the other threats from Russia and the UK?

Russia threatened to expel all British media after Britain warned it would strip Russian news broadcaster RT of its UK operating license if it finds evidence of the country’s involvement in the recent poisoning.

Theresa May earlier received the backing of support from US President Donald Trump in a call to Downing Street, as well as the UK’s NATO allies, including Germany’s Chancellor Angela Merkel.

Number 10 said: "Chancellor Merkel condemned the attack and said she stood in full solidarity with the UK."

Could Russia nuke UK and US?

The seemingly aggressive rhetoric from Russia comes after a demonstration of Moscow’s devastating weaponry from Mr Putin at the start of the month that fuelled World War 3 fears.

The Russian leader has recently boasted about his country’s military power saying it had developed “invincible” nuclear weapons with the power to “reach anywhere in the world”.

MOSCOW, March 30: Russia expelled 60 U.S. diplomats on Thursday and announced it would eject scores from other countries that have... Read More...