Costa returns to Chelsea side, scores on 100th appearance 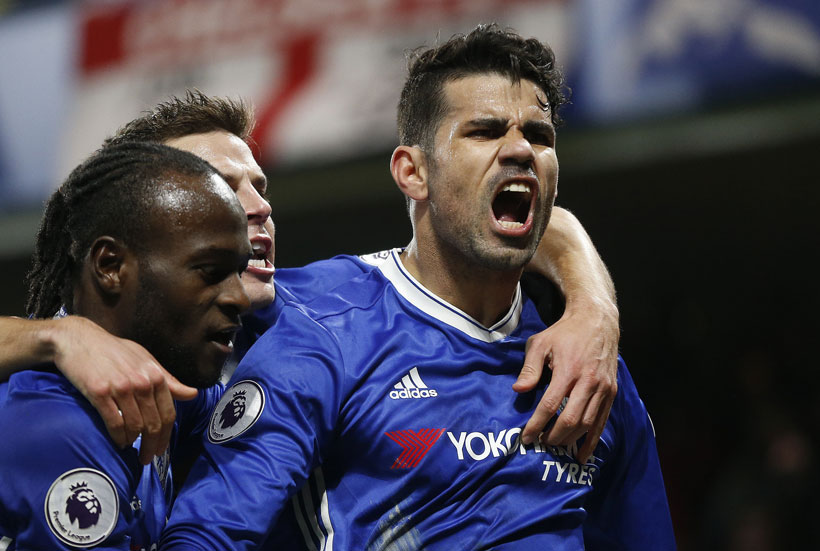 LONDON, Jan 23: Still to clear up the ambiguity over last weekend's absence from the Chelsea team, Diego Costa did his talking on the pitch on Sunday.

Costa marked his return to the side for his 100th Chelsea appearance by scoring the opener in a 2-0 victory over Hull that sent the Premier League leaders eight points clear.

After netting his 52nd Chelsea goal from close range at the end of the first half, the league's joint-top scorer alluded to all the speculation surrounding his Chelsea future by performing a chatter gesture with his hands while celebrating.

Publicly, Chelsea said Costa missed last Saturday's game at Leicester due to a back injury. What manager Antonio Conte did not dispute was that the striker was dropped over a dispute with the coaching staff amid suggestions of a big-money offer from China.

"It's important Diego played a good game," Conte said. "I hope with this game to finish the speculation about him, about Chelsea, about me and him. We showed we are a team with great unity."

Costa's 15th goal of the campaign came in the seventh minute of stoppage time, the result of a lengthy delay after a clash of heads between Chelsea captain Gary Cahill and Ryan Mason which led to the Hull midfielder being carried off on a stretcher as oxygen was administered before being taken to the hospital.

Cahill was able to remain on the field and he headed in Chelsea's second in the 81st minute after getting on the end of a free kick from Cesc Fabregas.

While Hull is next from bottom in the standings after a ninth straight away loss, Chelsea opened up an eight-point advantage over Arsenal.

It was a fiery end to a game that witnessed two penalties in stoppage time and Arsenal manager Arsene Wenger appearing to push the fourth official.

Arsenal went into additional time leading through Shkodran Mustafi's header but with 10 men after Granit Xhaka was sent off for a two-footed lunge on Steven Defour in the 66th minute.

"He has to control his game and not punish the team with a lack of control in his tackling," Wenger said of Xhaka, who has been sent off twice this season for Arsenal.

Wenger's heated confrontation with the fourth official came as he tried to watch the rest of the game from near the tunnel after being sent off.

"I regret everything. I should have shut up, gone in and gone home," Wenger said. "I apologize for that."

That came as Andre Gray looked to have snatched a point when he netted from the spot after substitute Francis Coquelin tripped Ashley Barnes. Wenger's mood was lifted in the seventh minute of stoppage time when Arsenal was awarded a penalty for Ben Mee's high foot challenge on Laurent Koscielny.

Leicester has mounted the most feeble defense of a Premier League title and is now in a relegation dogfight. Having lost half of their 22 games, Claudio Ranieri's players are sitting only five points above the drop zone. Not since Manchester City in 1938 have the topflight title winners been relegated the following season.

James Ward-Prowse, Jay Rodriguez and Dusan Tadic scored the goals as Ranieri, once known as the "Tinkerman," rued switching his team around.

"I tried to help my players in the last two matches, I changed our normal shape against Chelsea, to three at the back and today I played with a diamond, and this led to some misunderstanding," Ranieri said. "My players are used to playing 4-4-2, or 4-2-3-1, so for this reason I have made mistakes and it's my fault in the last two matches.

"It's one thing trying it in training and another entirely on the pitch. Today there was something wrong and it's my responsibility. If we make mistakes, yes they make mistakes but also it's myself who has to explain better."

MANCHESTER, Dec 15: Used sparingly by Chelsea during its long run of victories, Cesc Fabregas is providing significant reminders of his enduring... Read More...

Nepse increases slightly by 4.62 points, while daily turnover drops as low as Rs 1.474 billion on Monday
25 minutes ago