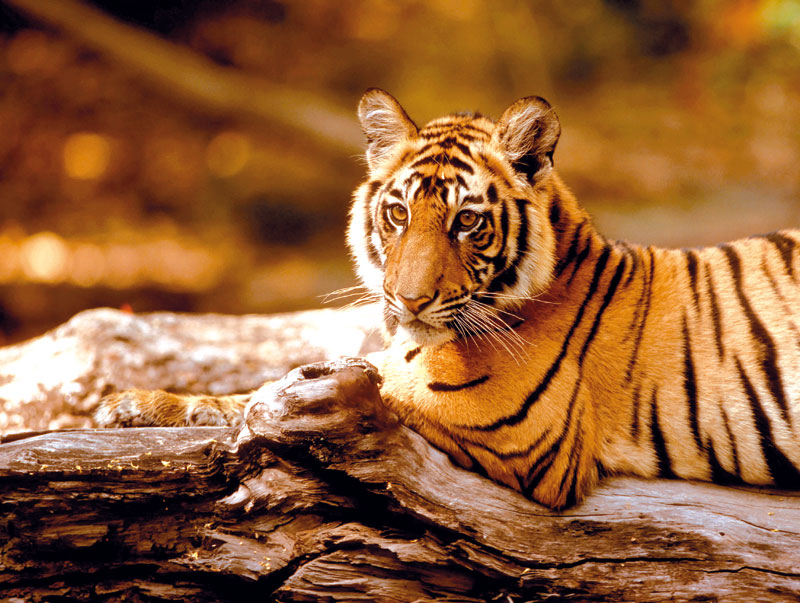 The author is wildlife lead and conservation biologist at WWF Nepal
news@myrepublica.com

Nepal aims to increase the number of tigers to double the current level by 2018. But it has been tough to balance its conservation and infrastructure development.

Asia’s most iconic yet endangered predator, tiger, has been extirpated from over 93 percent of its historical home range—an expanse that once stretched from the Caspian Sea to the island of Bali in Indonesia. It is disappearing primarily due to habitat loss and poaching.

To recover the remaining sporadically-confined populations in 13 tiger-range countries, conservationists have identified 20 terrestrial landscapes with the greatest potential for conservation and long-term persistence of wild tiger population. Under these landscapes are protected areas, corridors and bottlenecks. While conserving protected areas is the key, the role of corridors for habitat connectivity and for long-term tiger conservation also can’t be negated, as it increases the chances of tiger dispersal and survival.

Nepal lost much of its prime forest to land plotting and other anthropogenic activities like agriculture and encroachment in the past 300 years. Nepal’s case reflects transformations in global land use that has happened in this time.

Historically, tigers used to roam in many parts of Nepal, mostly along its Tarai and mid hills. However, the king of the jungle is now confined to just five protected areas in the Tarai Arc Landscape, with a contiguous forest in between. Considering tigers’ disappearance from half of Nepal in the past 50 years, the government envisioned a 100-year plan for tigers in 2001 in the Tarai Arc Landscape.

The Tarai Arc, identified as a priority tiger conservation landscape, runs along the base of the Himalayas from south-central Nepal to north-western India. It has remnants of the highly productive tall grasslands and savannas—known as the Tarai—and the Himalayan sub-tropical broadleaf forests. But productivity of these alluvial grasslands has also resulted in extensive forest development for agriculture, with associated settlements and infrastructure developments, isolating the protected areas.

Depletion of corridors and bottlenecks means habitat loss for tigers, which they are highly vulnerable to. A critical stage in tiger life is dispersal of sub-adults starting from natal areas so they can establish territories and mate. Dispersal of sub-adults from natal areas thus greatly influences tiger ecology, demography and genetic variability. Hence restoring these corridors and bottlenecks is a priority for creating meta-population of tigers in the Tarai Arc.

Nepal’s efforts in tiger conservation, as highlighted in the National Tiger Recovery Program (NTRP), focuses on protection of the core areas and restoration of corridors to facilitate dispersal. This would help in long-term recovery of tiger population and ultimately in the persistence of tigers in the landscape.

A recent publication in Plos One, ‘Tigers in the Tarai: Strong evidence for meta-population dynamics contributing to tiger recovery and conservation in the Terai Arc Landscape’ highlighted tiger recovery in core areas of Nepal: Suklaphanta and Bardia national parks, where there were reported cases of tiger population decline in the past decade, mainly due to poaching.

The paper highlights that tiger population recovery rate of 21 percent over the past one decade could not be accounted for only by natural reproduction but also by migration of tigers from surrounding areas. The government’s flagship tiger monitoring program in corridors shows strong evidence of tiger dispersal along forest corridors and recovery of tiger population after a period of decline.

Both population dynamics and tiger dispersal patterns in the Tarai Arc demonstrate the importance of a landscape-scale approach to tiger conservation, especially to help population recovery as a long-term conservation strategy.

Even though Nepal aims to increase the number of tigers to double the current level by 2018, it has been tough to balance conservation and infrastructure development. With rapid development taking place globally, Nepal is sure to witness changes in coming years owing to unsustainable construction of infrastructure in the Tarai Arc.
The government is planning to construct road networks, irrigation canals, railways, postal ways and hydropower in the Tarai Arc under which two parallel roads are being built on either side of the international border. This threatens to severe trans-boundary corridors, and another road will pass through the Barandabhar corridor to the north of CNP in Tarai Arc.

It is certain that Nepal will have to have more roads, railway lines, transmission lines, irrigation canals and pipelines, with most large linear infrastructure proposed along substantial habitat and corridor areas of the Tarai Arc. These proposed linear infrastructures will lead to adverse impacts like forest loss, tiger habitat fragmentation and destruction, loss of wildlife in road kill and poaching. This could undo two decades of strategic investment in the protection and recovery of tiger populations in the Tarai Arc.

To overcome this impact, there is a need for eco-friendly infrastructure development. Avoidance of crucial habitat during the designing of linear infrastructure can best reduce possible impact to wildlife habitats. Likewise, maintaining greenery in corridor areas, with plantation and restoration activities after infrastructure development, can also be an important step in maintaining connectivity. Construction of crossing structures such as overpass/underpass along with other mitigating structures (viaducts, ramps, modified culverts, etc.) are vital in maintaining connectivity between the habitats. This can in turn decrease the impact of fragmentation and increase dispersal of wild species.

Since Tarai Arc is a trans-boundary landscape, negotiations with governments in both India and Nepal are necessary. This will be needed for wildlife movement, and for corridor functionality. In India, protection of wildlife corridors has been mandated by the Supreme Court, but such laws are still lacking in Nepal, which makes conservation activities doubly difficult.

But this could be true for many other countries as well. The increase in landscape-scale conservation initiatives worldwide for large mammals and the integration of wildlife corridors into development plans across the world indicate that conservationists are now up to these challenges.

Tigers will remain conservation dependent species in a world where natural habitats will face increasing threats from development activities. Our protected areas will continue to remain a cornerstone in our conservation strategy. But there is now compelling evidence to affirm that landscape connectivity is important to ensure long-term persistence of these species.

The author is wildlife lead and conservation biologist at WWF Nepal

LAHAN, March 8: Life in various parts of Siraha district has been affected by the general strike called by the... Read More...

DANG, Dec 27: Different Hindu organizations have imposed a banda in the Mid-Western Development Region on Tuesday in a protest... Read More...