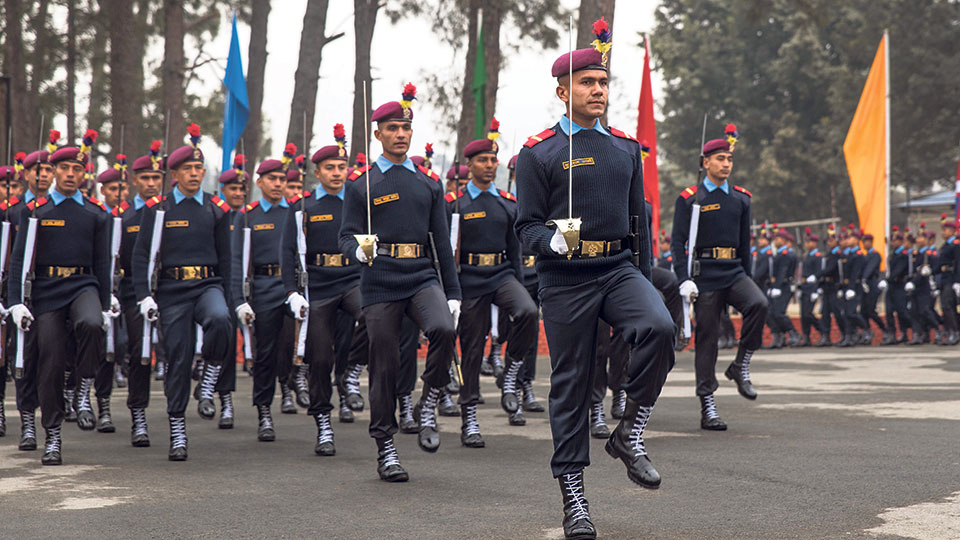 Nepal Police has a new IGP but the top cop will be in office for barely five months and then he goes home with all the perks that come with being the former head of the police force. This is what happens when our chor netas don’t want to amend the 30-year service rule for our police wallahs. If someone becomes the top cop then at least let him or her head the office for three years instead of having IGPs for a year, half a year or 18 months or two years.

It’s about time our police wallahs gather the courage to tell our netas that if they continue to interfere in promotions, transfers and investigations then Nepal Police will one day just be a government-owned security company for our politicians while the public will have to depend on dons to settle matters of all kinds.

Nepal Police has come a long way since the days of their ‘bora’ dress during the Panchey days to the ‘blue’ we see today. But the police force has not changed a bit. The way our police wallahs deal with the public still remains the same: using harsh language, laathis and boots and being feared instead of being civil and restraining themselves to regain the public’s trust.

Nepal Police has a serious image crisis. Maybe it’s time to hire a PR agency to make our police wallahs more likable. Yes, our police wallahs should learn to smile more often and not be so stuck up as if they are here to only abuse the public. After all, aren’t they sons and daughters of this land? Do they act or speak the same way in their homes and with their relatives?

We all know that the new IGP saheb cannot and will not do much in his five-month tenure at the headquarters. Our politicians will not let him do anything because he is there to fill the space for somebody else who will get to be our top cop for a few years. The 30-year service rule has not only affected the police force but we now have IGPs who are promoted from the pool of DIGs. Maybe, we should just scrap the AIG position or follow the army formula of having two senior officers under the chief saheb.

If our netas keep on adding positions at the top then don’t be surprised if you find a DIG heading a police beat soon.  Competent and honest police officers are rewarded less often while those who have connection with our netas and contractors get lucrative postings and faster promotions. That’s how our system has developed over the years and it really needs a collective effort of our IGP, Home Minister, and the Home Secretary to reform the police force.

It’s sad to hear about our own Home Minister’s brother facing jail time for his connection with gangsters. We know that Badal dai has nothing to do with it but our netas should tell their near and dear ones that they should not go around having chiya with dons because everyone will be watching, from our own guptachars to RAW to even CIA wallahs.  Look at the Mahara case. I think the foreign intelligence agencies based in Kathmandu are keeping better track record of the movement of our netas than our own folks.

Nepal Police lacks adequate resources and our government is not doing enough when we compare the funds provided to our Army and the APF wallahs. We hear stories about our police wallahs getting beaten up in villages. Maybe we need more police personnel outside the valley than in the capital itself. Yes, let’s make it mandatory for all our police wallahs to serve in rural and remote areas for at least a year during their service period. We have thousands of police wallahs in the capital to protect our netas and thulo macheys but we have barely a dozen in the mountains because ordinary lives don’t matter to our government.

Look at how our thulo mancheys roll around in Kathmandu. A blue bolero with a crazy driver who thinks he is riding a motorcycle and can change lanes as he wishes, with sirens blazing and so-called secret service wannabes waving small red flags as if the VVIP is late for a flight to Mars.

Then we have the VVIP with tinted windows because he or she is too scared or thinks is too big and important for the public to see his or her face. And then we have the APF wallahs with their black goggles and assault rifles as if they are driving through dangerous roads outside the Green Zone in Baghdad. How on earth did we end up with these freeloaders?

Our chor netas have used the police force for their own personal gain and our police officers are not motivated to do the right thing. How can you be an honest police officer when mundrey gundas, slimy contractors, and greedy cadres use their network to hamper police investigation?

We cannot blame Sarbendra Khanal for not doing his job. Yes, we had the 33 kilo gold smugging kanda. We still have not solved the ‘Nirmala’ murder case. We don’t know if the police did their job or these cases have not been solved due to political interference. We thought Khanal would be our ‘Singham’ but I guess he just didn’t have the courage to tell our chor netas that the police academy would stay where it is and not be a helipad for our Madame President.

So, what can our new IGP saheb do in the next five months? Well, he won’t be allowed to touch any tender nataks or promotions because that’s how our mantris and hakim sahebs play the system. And who wants to take risks for a few months? Look at what happened to former IGP Hem Bahadur Gurung. The man headed the police force for less than a year and he had to spend some time in prison for the‘Sudan’ scam.  This is the only country where our IGP sahebs head to prison but our Home Ministers and hakim sahebs at the ministry go home with extra perks.

Nepal is not playground for foreign criminals: IGP Khanal