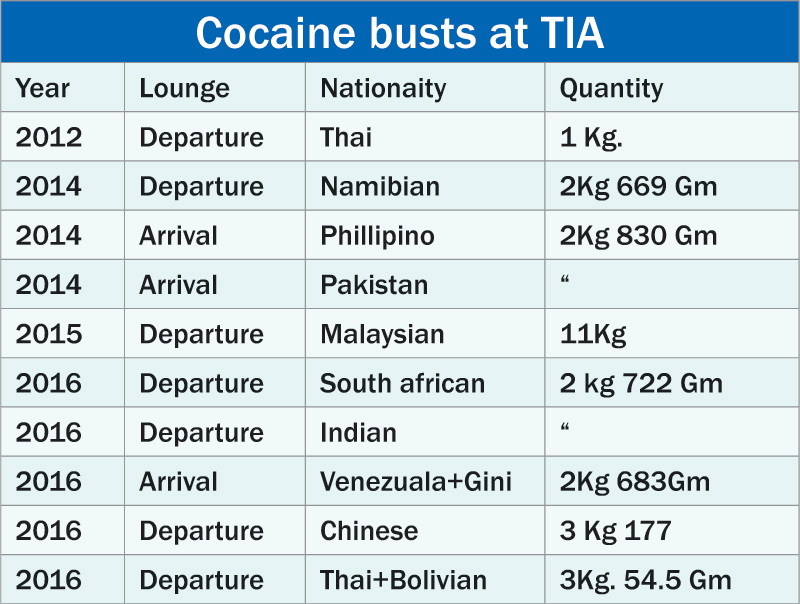 KATHMANDU, Aug 10: As in earlier narcotics busts, Nepal Police have blamed the Department of Customs at Nepal’s only international airport-- Tribhuwan International Airport (TIA)-for inadequate surveillance on incoming drug smugglers and carriers, and for thus contributing to Nepal becoming a transit point for them.

The allegation surfaced of late after the Narcotics Control Bureau (NCB) of Nepal Police arrested two foreign women--a Bolivian and a Thai-on the charge of cocaine smuggling to and from Kathmandu. A consignment of 3.54 kgs of cocaine was seized from TIA on Tuesday night during regular police scanning.

“Because of loopholes and negligence at the Department of Customs at TIA, the [Nepal] route has become ‘heaven or bliss’ for drug smugglers and carriers arriving here with illicit consignments,” DIG Jaya Bahadur Chand, director of NCB, said. Had there been stricter surveillance on those arriving, the smuggling of drugs to Nepal would have been controlled to some extent,” he added.

In the recent case, the Thai woman was arrested while preparing to board the 11:30 pm Malaysian Air flight to Kuala Lumpur with the illicit drugs concealed in the false bottom of her suitcase.

Based on information provided by her, the Bolivian woman, who arrived in Kathmandu on August 3 from Brazil and Ethiopia via New Delhi, was arrested from a hotel room around 2 am Wednesday.

Kaewpikul, the Thai woman who had arrived in Kathmandu on August 5 by Nepal Airlines, stated that she was hired by a Nigerian man identified as Remmy to collect the consignment from Rossy, the Bolivian woman, who in turn was hired by one  Claudio

But Police are yet to connect the dots between the two kingpins who hired the two women.

However, Yogendra Gauchan, chief customs administrator at TIA, said it was impossible to scan every piece of uggage to check if there were any illegal consignments concealed, given the lack of adequate time, manpower and technological aids.

“We have only 30 minutes to deal with about 2,000 passengers from five flights landing during the busy hours,” Gauchan argued. It’s almost impossible to seize drugs mixed with cosmetics, liquids or chemicals, he added. The market price of the illegal international consignment was Rs 61 million, according to NCB.

KATHMANDU, Jan 7: Following the interception  of 33.57 kg of gold smuggled through TIA customs, the Department of Customs under Ministry... Read More...