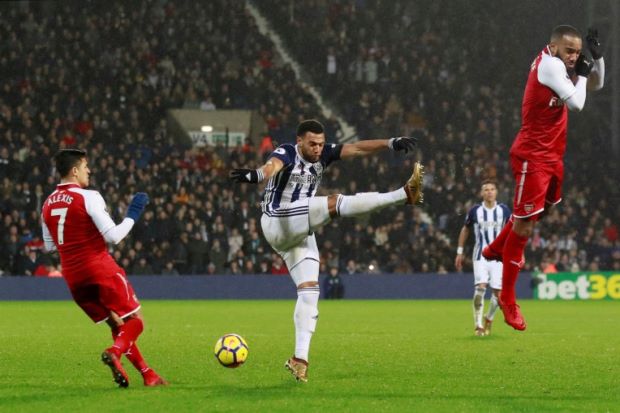 But Calum Chambers was harshly adjudged to have handled in the penalty area and Jay Rodriguez converted an 89th-minute spot-kick to help his side climb off the bottom of the table.

The Arsenal players were furious with the decision and Wenger was spoken to by referee Mike Dean but his team did climb above Tottenham Hotspur into fifth place in the table.

“I did fight many years ago for referees to become professional, but unfortunately their levels do not go up. It is difficult to accept,” Wenger told Sky Sports.

A knee injury kept Mesut Ozil out of the Arsenal side and they missed the guile of the Germany international as they struggled to create any real openings in the first half.

After the break, Arsenal upped the tempo and Alexandre Lacazette twice went close to scoring, but was denied by a fine Ben Foster stop in the home goal before poking wide from close range.

Rodriguez then had space to shoot for goal, but his tame strike was easily beaten away by Petr Cech.

In the final 10 minutes, the game came to life.

Sanchez’s free kick found the net after taking a flick off McClean who was standing on the edge of the wall.

“You can’t turn your back on it like that,” West Brom manager Alan Pardew said. ”It is there for everyone to see. So he will have to learn.”

As West Brom pressed for an equaliser, Kieran Gibbs tried to clip a cross into the middle, the ball hit Chambers on the arm and Dean pointed to the spot.

Rodriguez stepped up and calmly drilled the penalty down the middle to ensure Arsenal have won just twice in seven league games.