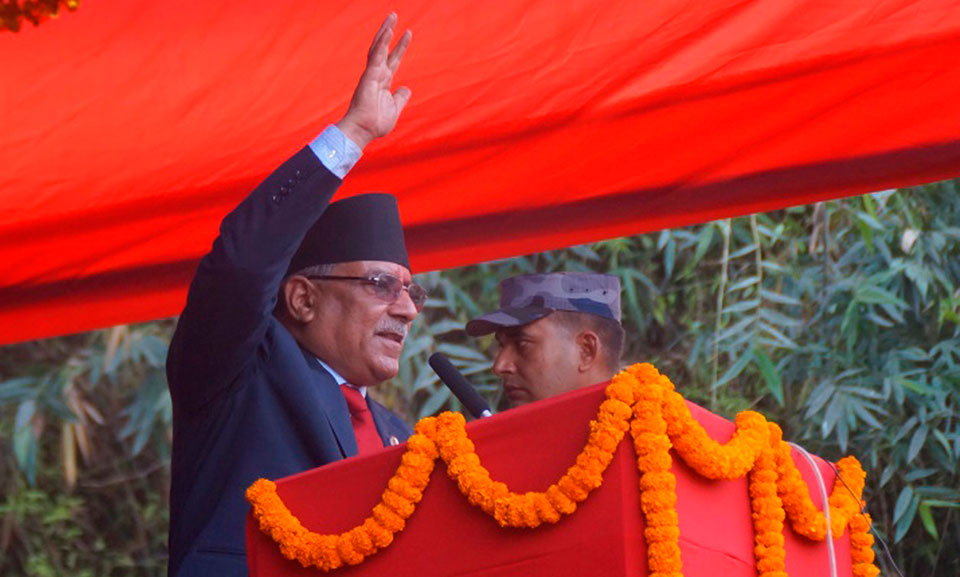 Chairman of the ruling communist party of Nepal (CPN) Pushpa Kamal Dahal attending the Agriculture and Tourism Fair at Charaudi, Dhading on Friday.

While inaugurating the golden jubilee celebration programme of Tribhuvan Bal Madhyamik School at Nawalparasi district on Friday, Chairman Dahal argued that the scheme would help the general public and workers for their better livelihood.

Also former Prime Minister, Chairman Dahal argued that the government has begun some innovative programmes and strengthened and harmonized foreign relations with neighbors and other countries.

On a different note, he committed to materializing the promises CPN made in its election manifesto within four years.

Time to work for national development

Meanwhile, at a programme in Dhading, the former Prime Minister urged one and all to join in the mission of economic prosperity as the government has prepared a ten-year plan for the same.

Inaugurating the Agriculture and Tourism Fair at Charaudi in the district on Friday, Prachanda argued that the nation would certainly make headway to economic prosperity once all became united and worked honestly.

He also committed to forwarding the district level developmental projects.

There are 150 stalls in the fair. The fair will run for ten days.

MAHENDRANAGAR, Oct 23: When Pushpa Kamal Dahal, chairman of CPN and former prime minister, was offered a vase made of... Read More...