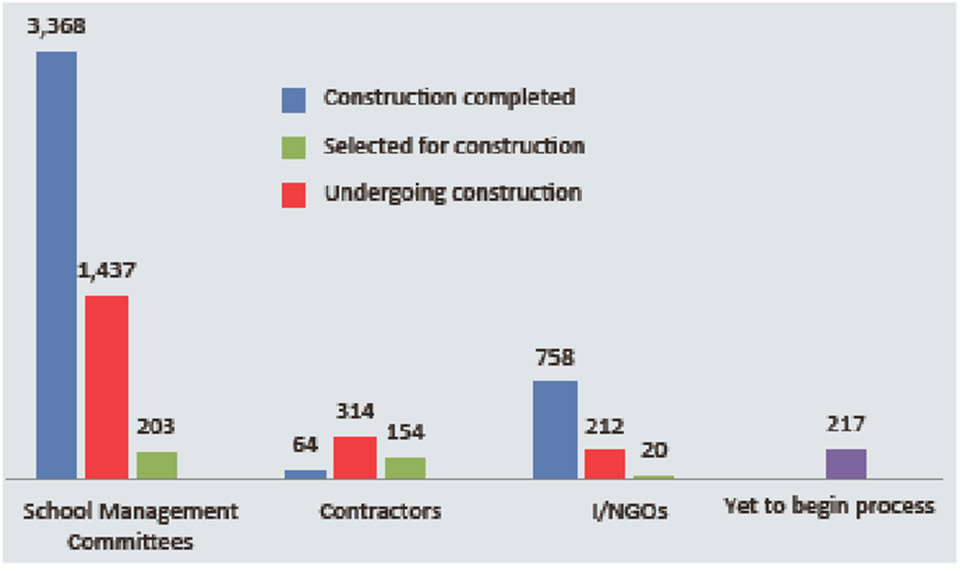 KATHMANDU, March 28: Contractors have completed only 12 percent of the reconstruction work assigned to them at schools affected by the 2015 earthquake in 31 districts. A total of 532 schools were contracted out to them for reconstruction.

According to the Ministry of Education, Science and Technology (MoEST), a total of 7,553 schools in the 31 districts were damaged by earthquake . The reconstruction of 6,530 schools is ongoing while the government is yet to begin reconstruction of 217 of the schools.

Roshan Dahal, general secretary of the Federation of Contractor Associations of Nepal (FCAN), said the major problem in the reconstruction was the transportation of construction materials . “Another problem is assignment of reconstruction in groups of schools . There are groups of 12 to 14 schools. If the schools were reconstructed individually, the progress would have been better ,” he added. However, Dahal didn't mention any negligence by contractors .

India also pledged to reconstruct 70 schools, 10 each in seven districts, at a cost of Rs 5 billion. It has begun reconstruction of eight schools, while the DPR for five schools and survey and design for 56 more are in the process of being completed, according to the CPIU.

The People's Republic of China also pledged to reconstruct seven schools in four of the quake-affected districts at an estimated cost of Rs 3 billion. China has been reconstructing Durbar High School in Kathmandu while feasibility study for all the schools has been completed. Reconstruction of two schools has started.

A budget shortage has also been felt although donors and development partners including ADB and JICA as well as the Nepal government have already pledged funds of Rs 86 billion. “We need an additional Rs 30 billion to complete the reconstruction of all schools,” said CPIU chief Shrestha, adding that no resources have yet been extended to 1,368 schools in the quake affected districts.

Local representatives blame negligence of engineers behind the delay in reconstruction

SINDHULI, April 25: Local representatives in Sindhuli have blamed the hectic process and negligence from technical staff for the delay in... Read More...