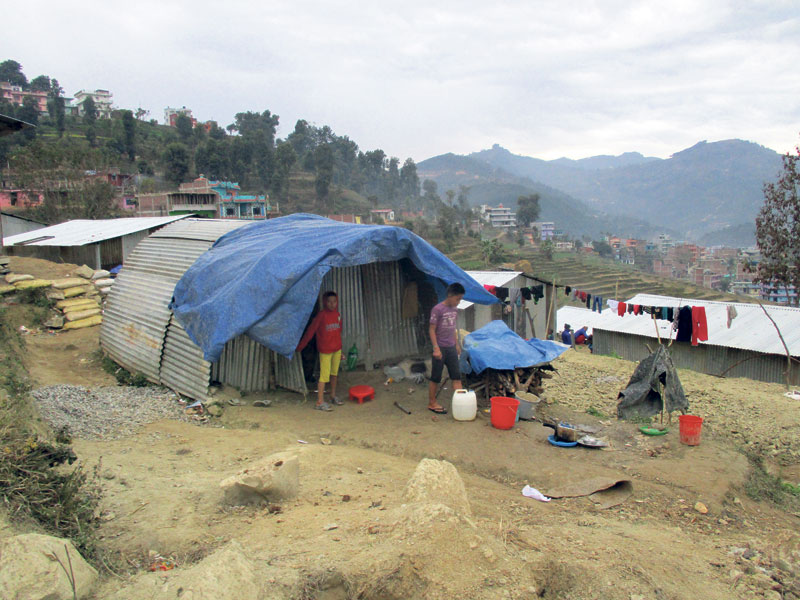 This recent photo shows earthquake victims outside a makeshift tin shed in northern Gorkha. Earthquake victims throughout the country are facing hardships during winter due to poor living condition. Photo Courtesy: Salina Gurung

SINDHUPALCHOK, Jan 3: Continuous snowfall, rainfall and the dipping mercury level have largely affected daily life of earthquake victims of Sindhupalchok district, who have been living in temporary shelters since the quake damaged their houses in April 2015.

Locals have felt excessive cold since the last five days. Highlands of the district including Helambu are covered with snow while lowlands are covered with frost. Locals remained confined to their homes with the dipping mercury level.

Schools were partially closed after the number of absentees increased significantly. Earthquake victims taking shelter in temporary shelter have been suffering the most.

"Since the temperature is dipping, locals are not daring to come out of their home," said Rudra Kumar Shrestha, head master of Melamchighyang Secondary School. Shrestha said students were asked to go on leave from Monday.

Earthquake victims were busy keeping their homes warm. "Sun has disappeared since the last five days and it's raining for the last three days," said Ben Bahadur Thapa, who is taking shelter at the Bakhkarka Camp of mountainous Selang Village Development Committee.

According to him, around 200 households taking shelter in Gumba, Golche, Selabng, Syaule VDCs are suffering the most as their tents fixed immediately after the earthquake have been damaged.

"Water is seeping through the damaged tents and moisture from corrugated zinc is troubling us. Our beds are badly wet," said Thapa, adding, "It is difficult even to light fire to keep the body warm." Locals are suffering from common cold and cough due to the extreme chill.

BIRATNAGAR, August 12: The normal life has crippled in eastern region of the country due to the incessant rain since... Read More...