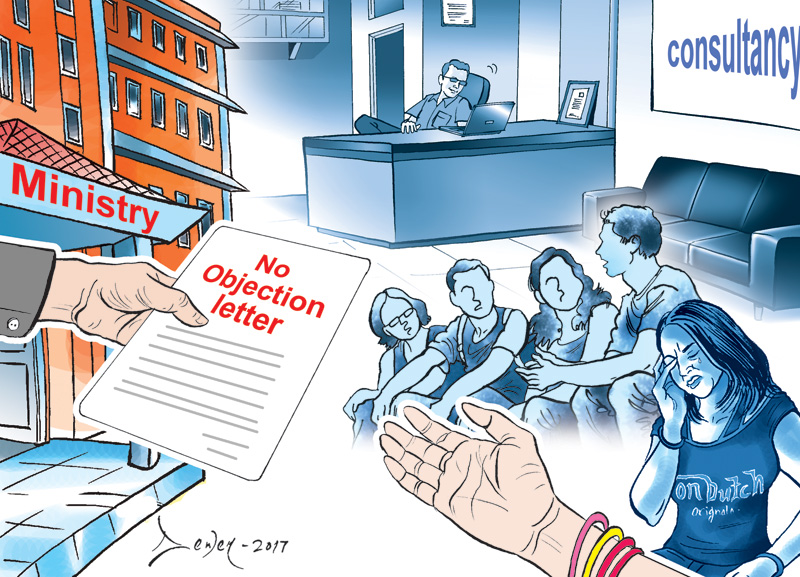 "We have received complaints that many educational consultancies are involved in cheating students, human trafficking and money laundering," said a high ranking official at MoE. "Also, complaints have been registered about a majority of them not paying taxes to the government."

The consultancies are suspected to be misusing the NOCs to show earnings by students while abroad and turn black money into white, said the officials.

They also said the consultancies inflate the fees payable at universities abroad and repatriat the excess amount to Nepal as earnings abroad. "As university fees in universities in Australia and some Asian countries are high, we found institutions in these countries at high risk of such money laundering," Binod Lamichhane, spokesperson of the Department of Money Laundering Investigation (DoMLI), told Republica.

Officials said they have found some consultancies to be creating fake NOCs through tampering  with the original copies of NOCs belonging to others. A highly-placed source at the MoE claimed that the ministry is investigating such fraudulent activities.

Superintendent of Police (SP) Prakash Karki at Metropolitan Crime Division (MCD) described the misuse of NOCs as one of the ways of money laundering practiced of late by education consultancies and individuals working in this sector. "The Department of Money Laundering Investigation may find something when these cases are probed," he said.

Lamichhane, who is director at DoMLI, emphasized  the need of serious investigations into the matter "as there is a high risk of money laundering using universities in Asia and Australia".

ECAN President Prakash Pandey admitted that several consultancies were involved in wrongdoing while sending students abroad. Pandey claimed that it was not easy to embezzle foreign currency and  launder money through misuse of NOCs, but added that such consultancies "can easily involve themselves in human trafficking as per requests from clients."

"Some are good but others are involved in illegal activities," Pandey said. "It is true that a majority of  consultancies don't pay their taxes. The government has also failed to regulate them."

Meanwhile, a total of 103 students were forced to return from St. Lucia, a small Caribbean country, last month after being cheated. They approach the MoE daily in hopes of being reimbursed. They went to Lambirds Academy in St. Lucia. However, the government there shut down the academy after finding that it was running programs illegally.

"We went to study cooking and bakery a year ago," said a returnee to Republica, requesting anonymity. "The academy was worse than a coaching center here in Nepal," he said. "We were 53 Nepali students and we paid about Rs 0.7 to 0.8 million to the college. We filed a case in a local court. Students from India and Philippines were reimbursed but they asked us to produce documents from the Nepal government for our reimbursement," he added.

Another returnee said the education consultancy had told them they would get an opportunity to go on to the USA from St Lucia.

While declining to disclose the name of the consultancy, Dillishwor Pradhan, under-secretary at the Scholarship Section of MoE, said that 34 students who returned from St. Lucia have registered  applications at the ministry for reimbursement. "Among them,  only 22 students had been issued NOCs. The other 12 had gone to St Lucia without NOCs," he added. "They were  sent by five consultancies in Chitwan and two in Kathmandu.

These were not registered anywhere. We sought help from the police but the latter also could not find the consultancies here," he added.

Superintendent of Police (SP) Prakash Karki at Metropolitan Crime Division (MCD) said  they have so far arrested 54 individuals from 48 educational consultancies on charges of swindling millions of rupees from students applying to go abroad. "The consultancies without registration operate with fake receipts and rubber stamps. When we receive complaints against them and go to arrest them, they would have already closed their office, removed the sign boards and fled," he added.

In the last three years, more than 32,000 students annually were issued NOCs. Students planning on studying languages, hospitality and hotel management are most likely to become victims of human traffickers, said MoE officials. "We recently stopped the issue of NOCs to half a dozen girls who had applied to study language courses abroad because they were being trafficked," MoE sources said.

Inspector Satya Narayan Thapa at MCD informed that two victims of human trafficking sent abroad by the High Link Education Consultancy of Koteshwar in Kathmandu were rescued this fiscal year. "We are searching for agent Buddha Lama of Kakani, Nuwakot for sending a girl to  study in Thailand after taking Rs 1.6 million from her. But she was taken to India from Thailand and subjected to exploition there," he added. "She escaped  and came to us to lodge a complaint recently," Inspector Thapa said.

KATHMANDU, July 24:Finance Minister Dr Yuba Raj Khatiwada has spoken of the need of paying attention to the implementation of standards... Read More...