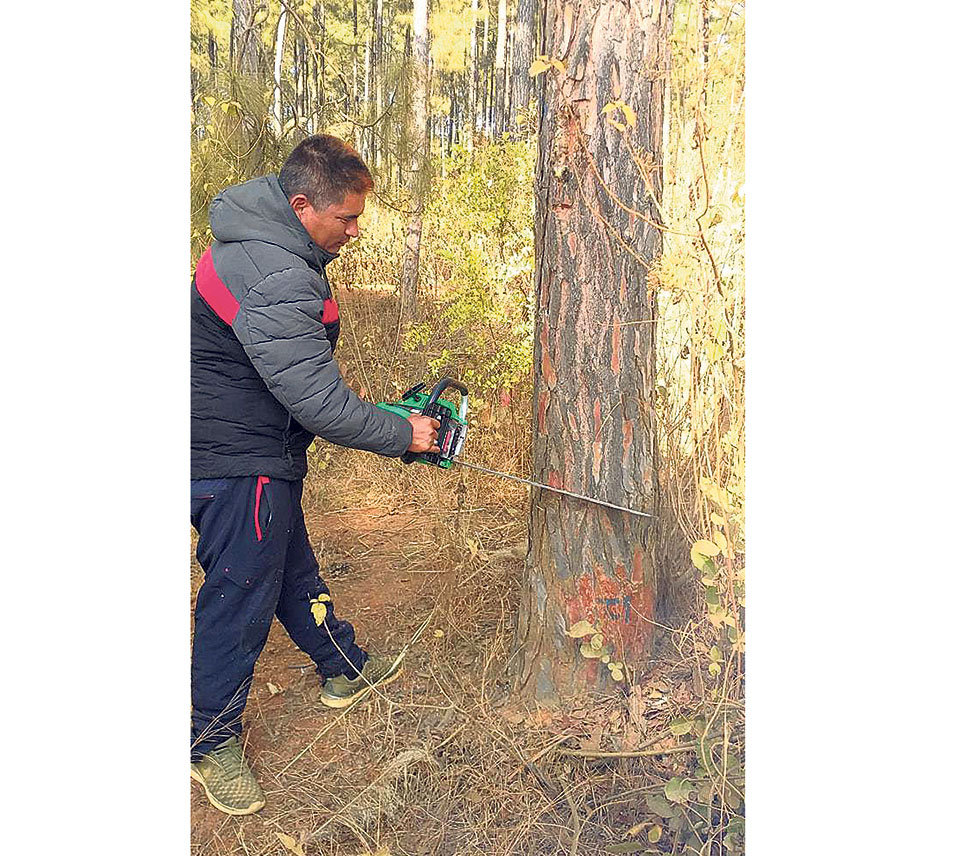 A man uses chainsaw to cut down a tree in the area allocated for Special Econoic Zone in Panchkhal of Kavre. Photo Courtesy: Kanchan Adhikari

“We had to acquire the necessary document and go through the right legal channels to cut down trees from two community forests form the area, which took a very long time,” said Arun Bhatta, an engineer at the SEZ construction project.

He said the contractor has already started cutting down trees in the forest. "Trees in one hectare of land will be cut down within the next 25 days," he said, adding, “We already have a contract agreement for construction of necessary buildings, which was signed last year. The construction works will also begin as soon as possible.”

A total of Rs 2.95 billion has been estimated for the construction purpose. Unlike its peers -- now operating Bhairawa SEZ and under construction Simara SEZ -- Panchkhal SEZ will have additional features such as entertainment centers and swimming pools.

“In the past, when a certain amount of budget would be allocated every year to construct the SEZ, budget would freeze due to unforeseen circumstances," said Kanchan Adhikari, a young facilitator who has been helping to move the project forward.

The government's attempts to open Tatopani cross-border trade route to China and a positive Chinese response to the initiative played an instrumental role to bring this project into life.

The locals were also delighted to see the work in progress as workers hired by the contractor began cutting down trees in the area.

Karma Singh Lama, a member of Devisthan forest Community, said: “We had been disheartened by seeing no progress but, to see the work finally starting has put smiles on our faces.”

A total of Rs 200 million had been paid to the Ministry of Forestry to acquire 30.5 hectare of land from Devistan Paddulla Subarneshwari Community Forest in Panchkhal and 20.3 hectare of land in Sikharpur.
“Some building can only be constructed in the total area of viable land that we have at the moment and trees have to be cut down to further get on with the construction work,” said Sundar Thapa, spokesperson of SEZ Authority.

The private sector has been pushing for establishment of a channel to bring-in Chinese laborers into the manufacturing sectors. Dil Sundar Shrestha, a member of Federation of Nepalese Chambers of Commerce and Industry (FNCCI), said: “The Chinese entrepreneurs are excited to come to the Nepali market. If the construction goes unhindered and the SEZ completes on time, it will help boost our economic activities.”

Nepal extends international flights suspension until May 31
10 hours ago

1.4B but no more? China’s population growth closer to zero
20 hours ago