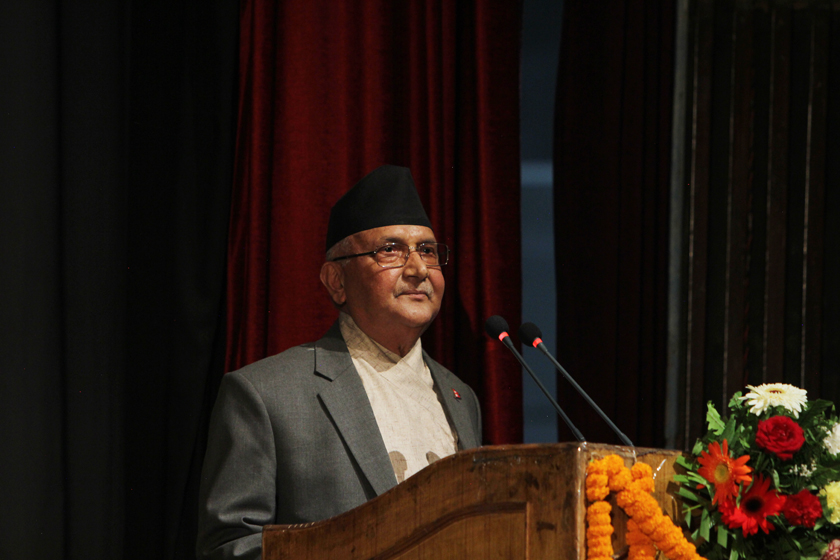 Prime Minister Oli attended a reception organized by Embassy of Nepal in Beijing on Tuesday evening. Addressing the function, Prime Minister Oli said that the construction of trans-Himalayan railway and other means of transportation will be expedited by his government.

The prime minister said that the present government has given high priority to developing transport network within and across the border.

“I believe railway connectivity, in particular, is of vital importance to a landlocked country in order to reduce transport transit costs as well as to diversify international trade and transport and promote tourism and service sectors of the country,” he said.

Recalling that Nepal and China agreed in principle to develop the cross-border railway network across the Himalayas during his last visit to China in March, 2016, Prime Minister Oli said that Nepal is committed to taking forward this important initiative further and develop cross-border railway infrastructure to mark a new era in Nepal-China friendship and bilateral cooperation.

“In addition to railways, Nepal and China are also committed to developing multi-dimensional connectivity networks of roadways, airways, communications and energy,” he further said.

“There is no doubt that efficient transport connectivity network will put Nepal in the global value chain of production and distribution,” he further said.

On Wednesday, Prime Minister Oli is scheduled to hold interaction with the business community in China and hold high-level meetings. On Thursday, Prime Minister Oli will inaugurate Nepal-China Friendship Walk in Beijing to promote tourism in Nepal. He will also hold bilateral talks with his Chinese counterpart Li Keqiang on the same day.

Nepal and China are scheduled to sign at least eight agreements or memorandum of understandings (MoUs). The agreements finalized for signing include five agreements at the government level and three others at the level of private sector.

In his briefings to the parliament on Monday, Prime Minister Oli said the main objective of his six-day visit is to further expand and strengthen bilateral cooperation between the two countries. He said that the bilateral agreements and understandings that Nepal will reach with China during his visit will be in line with Nepal's national needs, keeping national dignity and sovereignty of the country at the center.

Deputy Prime Minister Ishwar Pokharel has been appointed as the officiating prime minister of Nepal.

Prime Minister KP Sharma Oli has given the responsibility of the officiating prime minister to DPM Pokharel, who also holds the defense ministry portfolio, before leaving for Beijing on Tuesday.

Similarly, Oli has appointed party's senior leader Madhav Kumar Nepal as the officiating chairman of CPN, according to CPN central committee member Bishnu Rijal. Currently, another chairman of CPN Pushpa Kamal Dahal is in Singapore for the treatment of his spouse.