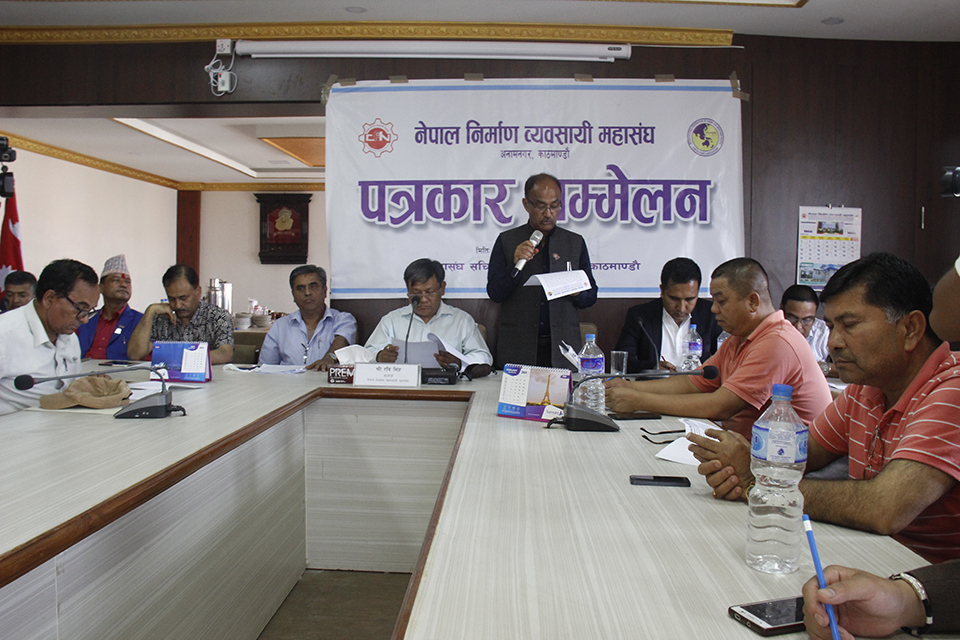 Officials of the Federation of Contractors' Associations of Nepal at a press meet organized in Kathmandu on Tuesday.

KATHMANDU, May 1: Construction entrepreneurs have said that they have been repeatedly threatened by unidentified individuals over phone.

Organizing a press meet in Kathmandu on Tuesday, they said such threats have eroded their confidence to implement development works.

The statement of construction entrepreneurs has come at a time when the government is worried about slow pace of development works.

Construction entrepreneurs say they were forced to take the matter to public as the authorities concerned turned a deaf ear toward their repeated pleas. Speaking at the press meet, Rabi Singh, president of Federation of Contractors' Associations of Nepal (FCAN), said that as many as 25 entrepreneurs are getting such threats. He also added that the situation was getting worse as construction entrepreneurs were afraid to travel to the project site.

Similarly, former president of FCAN Jayaram Lamichhane warned that all development works could come to a halt if the situation is not resolved soon.

However, Ram Krishna Subedi, the spokesperson for the Ministry of Home Affairs, said that they have not received report of any such threats in recent days. "I think the plea that they made few weeks ago has already been addressed," he said, adding: "We had forwarded their concerns to the Nepal Police and concerned authorities in the district.”

He also asked contractors not to worry and added that they can talk to chief district officer of concerned districts if they feel insecure.

At the press meet, the construction entrepreneurs also expressed dissatisfaction over release of payment of completed works. They said that such delay was affecting money circulation in the market, tightening liquidity situation in the banking system.