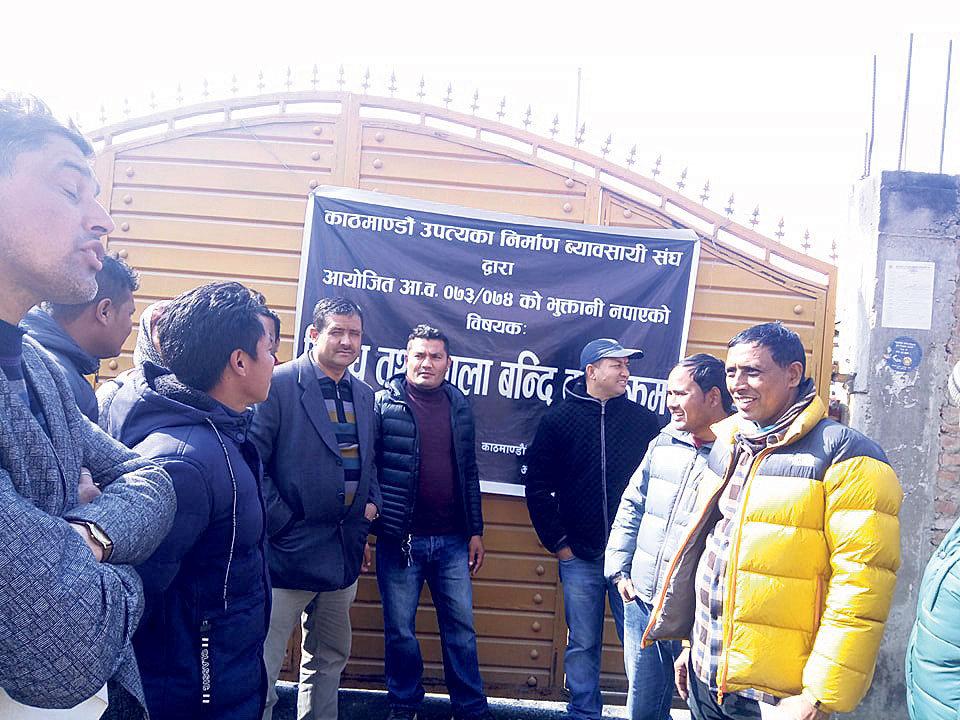 KATHMANDU, Jan 26: Angry over the dilly-dallying approach of Division Road Office (DRO), Kathmandu-1 in releasing payments for construction works completed in Fiscal Year 2016/17, Contractors' Association of Kathmandu Valley on Wednesday padlocked the office to pile pressure for the early release of payments.

The contractors padlocked the office for about an hour on Wednesday, demanding that outstanding payments of contractors be released at the earliest. Balkrishna Thapa, president of Contractors' Association of Kathmandu Valley, said that they were forced to padlock the office after their repeated request for early release of payments fell on deaf ears. “

"We have made repeated requests to the office for release of payments. But the office has been deferring payments under one pretext or the other due to which we have been facing inconvenience in continuing other construction wor”s," he added.

According to Thapa, the office is yet to release payments worth Rs 300 million.
Tika Ram Subedi, the promoter of Naya Yug Construction Service, told Republica that despite completing the construction work of Pushpanjali Marg at Koteshwar in mid-June, he has not received payment of Rs 7 million until now“. "We not only completed the construction by the end of the last fiscal year but also cleared the VAT bill. But we have not received payment even after more than six months of completion of the project," he added.

Although Rajdhani Construction Pvt Limited black-topped the road alongside Singha Durbar as per an agreement with the DRO, they have not received their payments of Rs 6 million according to Kabita Bhattarai, the promoter of Rajdhani Construction“. "We are facing bankruptcy as we have taken bank loans to continue our other works. With payments still uncertain, we are having hard times repaying our loans," added Bhattarai.

Meanwhile, Mukunda Raj Adhikari, chief of DRO, Kathmandu-1, said that his office has not been able to make payments to contractors as the Ministry of Finance has not dispatched funds time“. "As we have not received funds from the finance ministry, we have not been able to release payments for works completed in the last fiscal year," added Adhikari.

Adhikari also said that the office needs to make payments worth around Rs 300 million to contractors for works completed in FY 2016/1“. "We will release payments at the earliest by working in coordination with the finance ministry," he added.

The contractors have said that they will continue their protest until their payments are released.

RAUTAHAT, March 28: Citing “irregularities” in the development activities conducted by the local government, locals of Gadhimai Municipality have padlocked the... Read More...

RAUTAHAT, March 29: Citing “irregularities” in the development activities conducted by the local government, locals of Gadhimai Municipality have padlocked the... Read More...

Shweta Khadka getting married this December
19 hours ago

Alluding to India, China says its relationship with Nepal will not impact third party
15 hours ago