Construction continues even after three months of national games 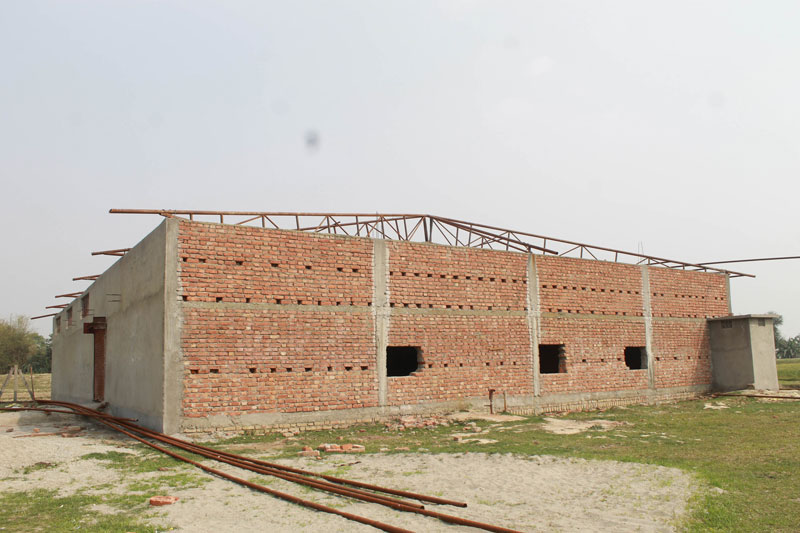 MORANG, April 2: The Seventh National Games concluded in December last year. However, the construction of infrastructures that begun prior to the national event is yet to be completed in Baijanathpur of Morang.

Government had bought 15 bigahas (1 bigha = 2529.3 square meter) of land 15 years ago with the plan of constructing sport infrastructures. But the plan wasn't executed  until the Eastern Region was picked as the host of the Seventh National Games.

National Sports Council (NSC) had started the construction of cricket ground, tennis court alongside the shooting range in Baijanathpur after the announcement of the Seventh National Games.

However, the construction works are not only incomplete three months after the conclusion of the event but also face the risk of not being properly used.

Baijanathpur is six kilometers away from Sahid Stadium, Biratnagar. Local players in the district do not go to train on those venues in Baijanathpur not only because of the distance but also because of the lack of essential training facilities.

There is not even a toilet somewhere near the tennis court. Hence players are forced to practice in the old tennis court at the Sahid Stadium in Biratnagar.

“The newly built court in Baijanathpur is very good but there are no basic facilities including toilets and changing rooms. In this situation, we are forced to conduct trainings in the small and old court at Sahid Stadium,” said tennis coach Rajesh Bohara.

When asked about the under construction infrastructure, NSC Member Secretary Keshav Kumar Bista blamed the committee of local users. He, instead, said that he is unaware why the construction works are delayed.

According to Devraj Katwal, chief of the District Sports Development Committee, Rs 1.8 million was allocated for the first phase of works and the amount is already spent. Similarly, additional amount of Rs 4 million was provided during the National Games and Rs 2.3 million out of that has been already spent, informed Katwal.

Meanwhile, Kaushal Acharya, the treasurer of the committee of local users, claimed that the construction of the shooting range would be completed within a week. “We will complete the construction of the building in next seven days. Due to many reasons, we failed to complete the work before the national games, but we will complete it very soon,” said Acharya.

Likewise, the cricket ground in Baijanathpur helped in holding all the cricket matches under the National Games but some important constructions are yet to be done. There is no pavilion and drainage system at the ground.

NSC had allocated Rs 6 million for preparing the cricket ground. A separate committee of local users was formed to make the ground ready with two-turf wickets on it.

“Though the NSC had given us the responsibility of making the ground ready for the game with two-turf wickets, we prepared three-turf wickets from the allotted budget,” said  Mohammad Saadbabu, the chairman of the committee.

On the other hand, cricket coach Mahesh Rijal said that the ground needs regular maintenance and facilities like pavilion, drainage system and parapet in future if the NSC wants to develop it as a standard ground in future.

“NSC should allocate more budgets for regular maintenance and upgrading it," said Rijal.

BHIMDUTTANAGAR, Dec 15: Of the total 4,029 players across the country vying in 35 games during the forthcoming 7th National... Read More...