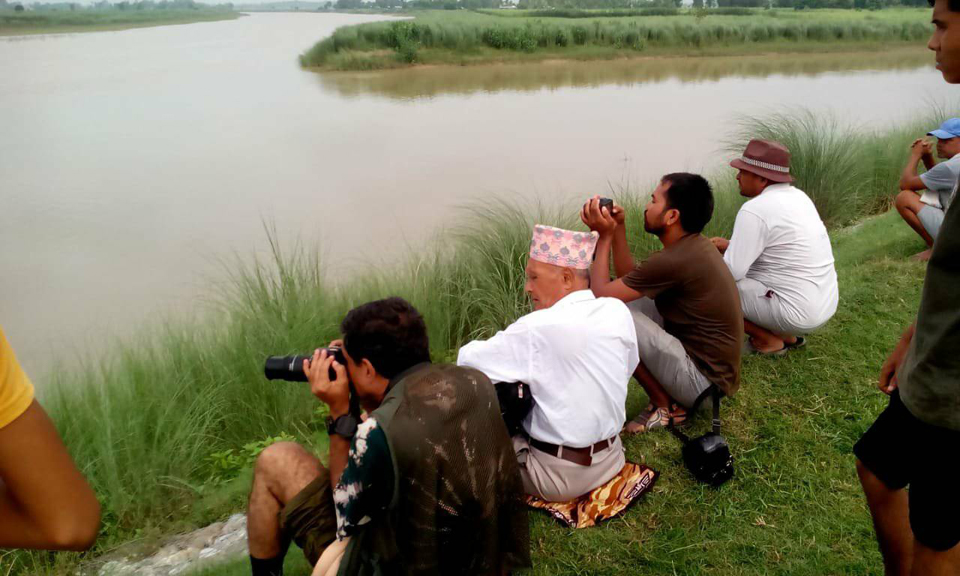 Yogesh Rawal/Republica Guleli Baje, center in white shirt, sit on the bank of a tributary of Mohana and Pathairiya rivers for counting dolphins in the area in this recent picture.

TIKAPUR, July 30: Biplav Raj Shrestha, 23, of Vajani Municipality in Kailali is pursuing master's degree in engineering at a Hyderabad-based college in India. Whenever he returns home during holidays, he makes sure to visit the Dolphin site near his home. He checks conditions of the dolphins and shares knowledge about the importance of the endangered aquatic mammal species.

While Biplav is not a dolphin expert, the opportunity he got from a very young age of seeing dolphins, deepened his interests in them. His grandfather, Bhoj Raj, 85, and father Bijaya Raj, 53, both are well-known conservationists of the locality. Now all three generations of the family are working for dolphin conservation.

During the recent dolphin counting, the trio was seen nearby tributaries of the Mohana and Pathariya River.

“The works of my grandfather and father influenced me and inspired me to advocate for dolphin conservation,” said Biplav. “Although I cannot dedicate full-time for the cause, I'm always devote myself to it whenever return home for holidays.”

The first dolphin census in the district was carried out in 1999 under the initiation of Biplav's grandfather, Bhoj Raj, who is known locally as 'Guleli Baje'. Bhoj Raj, recalls that an American had made him aware about the importance of dolphins, following which he took the initiation to carry out the census.

“Prior to the census, Indians used to kill dolphins in Mohana after trapping it in their nets. Sometimes the locals also used to do the same,” recalled Bhoj Raj. “Many dolphins were killed because of fishing. At the time we did not know the importance of dolphins.”

Guleli Baje then worked day and night for dolphin conservation. Locals also supported his initiatives. As a result, there are currently 14 dolphin conservation centers in various parts of the district, which were made possible with initiation from the local community.

Likewise, there are three eco clubs and nine dolphin clubs in the district. The clubs strive to spread awareness about dolphin conservation. Around 60,000 locals are directly and indirectly involved in the conservation efforts, said Bhoj Raj Dhungana, a conservationist of Dhunga Tole, Tikapur Municipality.

“The dolphin conservation effort became a success story because of the local community's involvement,” he said. “Had the community not involved, it would not have been possible to save dolphins.”

Many youths volunteer for the cause. They set aside some time to spread awareness about dolphin conservation. They enjoy strong support from their community members.

Hiru Lal Dangaura of Vajani-6 is the treasurer of Dolphin Conservation Center. He was just a fourth grader at Pultupur-based Rastriya Primary School when Guleli Baje, who was then chairman of the school management committee, had launched the save dolphin campaign.

“I have been working in the conservation sector since my school days. Guleli Baje efforts inspired me to work in this sector,” said Dangaura. “Dolphins are like ornament of our community and environment. It is our responsibility to protect the species.”

Aanta Ram Chaudhary of Vajani-2 is a farmer by profession. However, he has always managed to set aside some time off his busy schedule for dolphin conservation. It has now been 15 years since he has been doing this.

Gangetic species of dolphins, found in this area, are also found in India, Pakistan and Bangladesh.

Chaudhary is also a coordinator of wildlife trafficking control taskforce. Conservation works have already become a part of his life. “I cannot stay away from it even if I want to. The work has become like addiction to me,” he said.

Another local, Dhani Ram Regi has donated one kattha of land to construct dolphin view tower. When the construction completes, people will be able to observe dolphins in tributaries of Pathariya and Kanda River from it.

According to a conservationist, Bijaya Raj Shrestha, local community's involvement in conservation efforts has massively increased in the recent years. “Some elderly even donate funds from their old-age allowance for dolphin conservation.”

Professor Dr Mukesh Chalise said that the growth of the dolphin population in the recent years have been possible due to commendable conservation efforts from the locals. “Roles of the local community have been very important. It is a completely community-driven campaign. The government also should also provide support in the coming days to boost it further,” he said.

According to the dolphin census carried out this year, 47 dolphins were found in the rivers of the district. Of them 12 are said to be baby dolphins. The tributary of Mohana and Pathariya River boasted seven dolphins, the highest numbers of dolphins found in the same location, informed Chalise.

Census was carried out at the same time in 37 locations but dolphins were found in only 13 locations. “It could be that the dolphins were not seen in the area because of the low level of the water in the river. Around two meters deep water level is required for dolphins,” he added.

Dolphins are found mostly in Mohana, Pathariya, and Kanda rivers between July and September. During other months, dolphins head for the Karnali River. Gangetic species of dolphins, found in this area, are also found in India, Pakistan and Bangladesh.

TIKAPUR, Oct 12: Locals of Tikapur Municipality have expressed disappointment over the municipal authority for dumping garbage in a dolphin conservation... Read More...