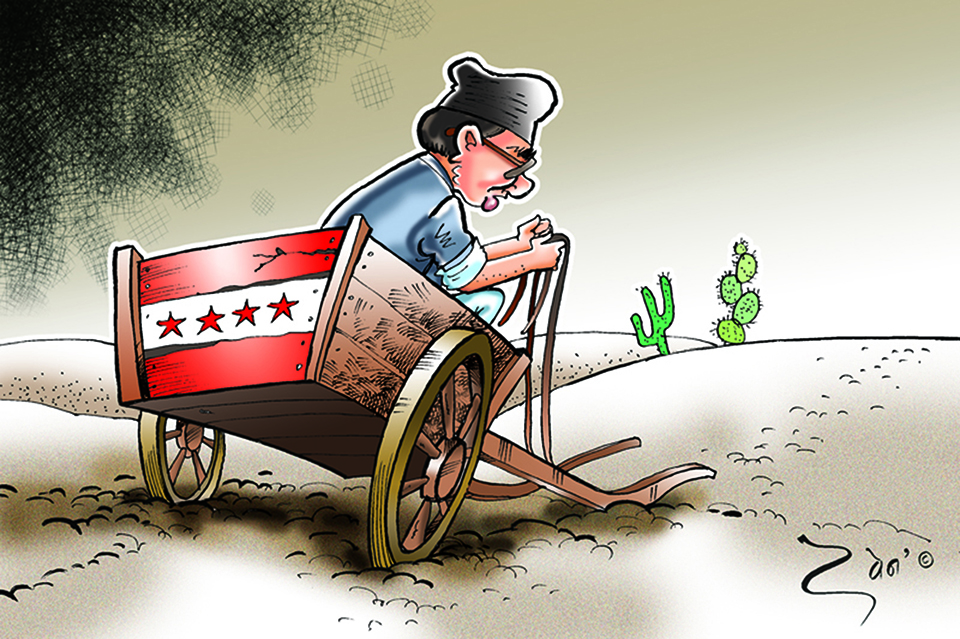 What Congress leaders would have us believe as authoritarianism is actually hubris, arrogance and total disregard to public concerns which every party has displayed while in power

Reverse the current political order for a moment. Communist alliance did not materialize. Nepali Congress, CPN (Maoist Center) and CPN-UML contested the polls separately last year. Congress stood first or second, or won enough seats to form or help form the government, as a leader or coalition partner. Then the communist unity did not take place. Congress together with some factions of Rastriya Prajatantra Party or Madhesi parties is at the helm. In place of K P Sharma Oli, we have Sher Bahadur Deuba.

Deuba would first visit India, like Oli did. Then he would go to China, like Oli did.  Perhaps Indian Prime Minister Narendra Modi too would come to Nepal (for he had to restore his faith in the neighborhood on the eve of 2019 elections).

Perhaps India would not announce railway network expansion up to Kathmandu from Raxaul. Perhaps China would not float railway proposal but we would still be talking about the Belt and Road Initiative (BRI). Nepal had signed on BRI framework agreement while Congress-Maoist Center alliance was in power and when Prakash Sharan Mahat was its foreign minister.

Certain things do not change with change of guard in Kathmandu. Whatever has to happen on foreign policy front has usually happened irrespective of who is the head of the government in Nepal. Some leaders show greater acumen, others fail to make an impact. That is the only difference.

What would Deuba do on home front?  Would federal system go in smoother implementation under his leadership? Would his ministers become less protective of interest groups and coteries and more proactive in service delivery?  Would there be better governance and rule of law with Deuba in Singha Durbar?

With Oli’s failure in governance becoming starkly noticeable, Congress leaders will soon start saying ‘yes’ to this question. We often forget the worst days of the past and think of present as even worse. The situation would have been more or less the same except that we would not be talking about authoritarianism.

What is happening and what Congress leaders would have us believe as authoritarianism is actually hubris, arrogance and total disregard to public concerns which every party has displayed while in power. At the moment, Prime Minister Oli and his cabinet colleagues have started to personify these traits. Congress must stand up to this government precisely for this reason.

Yes, Oli government had started well. It told us that it would end syndicate and cartel in public transport for good. But there is no progress on the ground.  It started well by arresting some of those accused in billion rupees gold smuggling scam but has not gone further. On foreign policy, it has not left much room for criticism but the government has been lenient in the spheres where it should stand tough and cruel where it must be lenient.

It is dead against fight for reforms in medical and health education initiated by Dr Govinda KC. It has restarted the process of doling out state funds to party loyalists (Minister of Tourism and Civil Aviation Rabindra Adhikari comes to mind). And as if people protesting in Maiti Ghar Mandala were the one and only hurdle to rule of law, governance and development, it has made prohibiting protests in public space its signature mission. The government that is committed to public welfare works in a way people do not have to resort to protests. The government that disregards the people sees protests as a big threat.

If we had assertive Congress in opposition bench, some of these excesses could have been checked. It cannot be a mere coincidence that the murder suspect of Krishna Prasad Adhikari, Chhabi Lal Poudel, surrendered to the court after Congress stood in favor of Ganga Maya’s struggle for justice.

Congress has missed big opportunities already. The Constituency Development Fund was a big blot on our democracy.  This had only become an easy means for lawmakers to fork out money to compensate for their electoral spending. This disgrace should have been consigned to history. The government continued this scheme in this year’s budget. Congress did not speak against it. It was happy with prospect of some of its lawmakers benefiting from misuse of state money. This was such an issue for which even if the Congress lawmakers obstructed parliament proceedings, it would have sent a good message and helped build the much-needed political capital for the party in “coma.”

Congress lawmakers should have stood against similar provisions being made in provincial budgets. They did not.

And then there was presidential pardon to murder convict Bal Krishna Dhungel. If Congress had stood vehemently against it, the government would perhaps think twice. (Congress leaders admit to these failings. Senior leader Dr Shekhar Koirala admitted that the party made mistakes on these fronts in an interview with Republica last week). But it’s no use crying over the split milk. Time has come for the grand old party to speak up loudly. Yes, Congress is weak but no so weak as not to be able to speak against misrule.  Bibeksheel Sajha Party is far weaker than Congress in terms of numerical strengths but it is at least raising issues of public concern.

When a political party makes mistake during the critical times in history it fundamentally alters the political landscape. Oli rose to power because he stood in favor of national interest during the most difficult times in 2015. He has been amply rewarded for that. If Congress had been as assertive at the time, it would not have disenchanted its voters.

Congress should begin to speak for good governance, transparency and rule of law. It should speak to make the government accountable. One might argue how can a party that failed on those very fronts speak for those principles? But it is the dharma of opposition party to raise the issue of public concern. It is when the opposition becomes helpless spectator or part of government wrongdoings the government becomes authoritarian.

Most of all, it should make its stand public on constitution amendment, which Oli is most likely to initiate to keep Madhesi leaders (those in power and those waiting to ascend to power) in good humor.  How will Congress respond if the government with two third majorities decides to alter provincial boundaries? What will be Congress’ position on contestations on citizenship and language?

Historically, parties in opposition have become active only in scheming to topple the government in power. They have waited for the party in power to fail to vindicate their failures. Congress should not wait for that to happen in case of Nepal Communist Party.

BIRATNAGAR, Dec 8: While Morang-6 was considered a strong hold of Nepali Congress, the Left Alliance are leading in all... Read More...