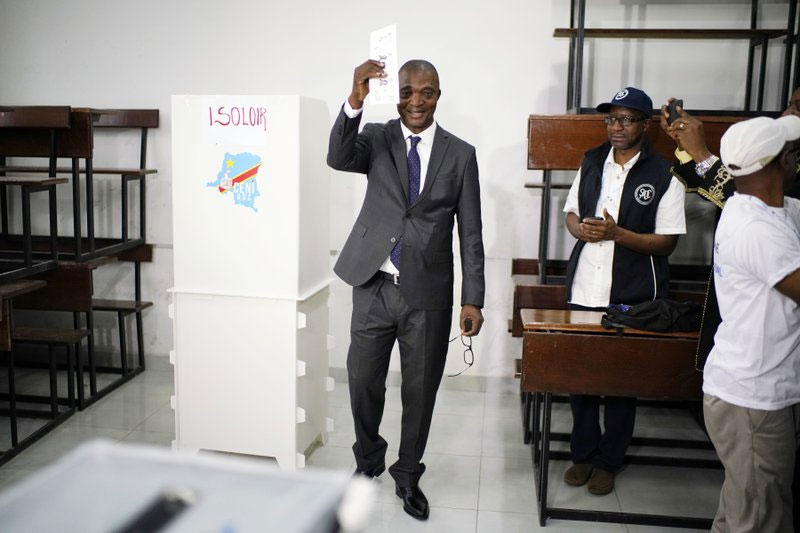 KINSHASA, Congo, Dec 30: People in Congo have begun voting in a long-delayed presidential election that could bring the troubled country’s first peaceful, democratic transfer of power.

Some unrest is feared in the election after a last-minute decision to bar an estimated 1 million people from voting because of a deadly Ebola virus outbreak in the country’s east. The decision has been widely criticized as threatening the credibility of the election.

Amid rainy weather in the capital, Kinshasa, Kabila and Shadary voted at the central Gombe Institute polling station.

“My message today to my compatriots is to come and vote for their candidates and brave the rain,” said Kabila, after voting.

Shadary called for “peace and calm,” adding “I am very confident in victory because the Congolese people will trust me, I campaigned all over the country.”

“It is the departure ticket for Kabila” said Fayulu as he cast his ballot. “Today, we are writing the end of Kabila, the end of misery for Congolese people. Congo will stop being the laughing stock of the world and we think the results will be in accordance with what the Congolese people want.”

Ordinary voters lined up at the Gombe Institute station where, with some delays, they cast their ballots. Although it was estimated that people could vote in one minute, the voting process was taking several minutes per person, causing electoral officials to worry.

“People are supposed to take one minute to vote, we cannot afford this,” said Francoise Tshiela, chief of the Gombe voting center, of the time it takes voters to cast their ballots.

Congo’s 40 million registered voters are using electronic voting machines with touch screens for the first time amid opposition concerns that the results could be manipulated. Some Congolese observers have said voting materials didn’t reach some polling stations in time.

At stake is a country rich in minerals including those crucial to the world’s smartphones and electric cars, and yet Congo remains desperately underdeveloped. Corruption and insecurity are widespread.

GENEVA, May 18: Democratic Republic of Congo faces a "very high" public health risk from Ebola after the disease was... Read More...