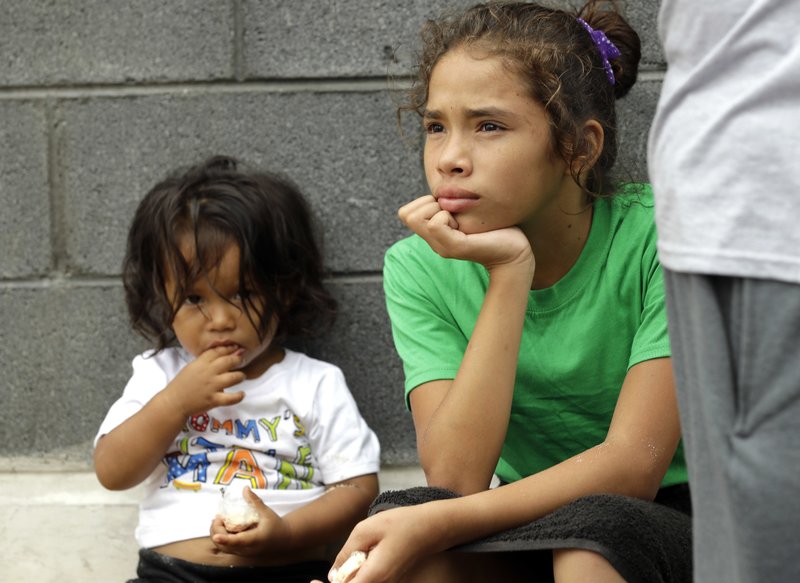 Angui Funes, right, sits with her brother, Jesus, after crossing the border back to Reynosa, Mexico, Thursday, June 21, 2018. The family, who was seeking asylum, said they were told by officials they would be separated so they voluntarily returned to Mexico. (AP Photo/David J. Phillip)

TEXAS, June 22: Immigration enforcement on the U.S.-Mexico border was plunged deeper into chaos over President Donald Trump’s reversal of a policy separating immigrant children from parents, causing uncertainty for both migrant families and the federal agencies in charge of prosecuting and detaining them.

A senior Trump administration official said that about 500 of the more than 2,300 children separated from their families at the border have been reunited since May. It was unclear how many of the children were still being detained with their families.

Federal agencies were working to set up a centralized reunification process for the remaining separated children and their families at a detention center just over the border in Texas, said the official, who was not authorized to speak publicly and spoke to The Associated Press on condition of anonymity.

There were also signs that the administration was dialing back its “zero-tolerance” policy, for now.

The federal public defender’s office for the region that covers cases from El Paso to San Antonio said Thursday the U.S. Attorney’s Office would be dismissing cases in which parents were charged with illegally entering or re-entering the country and were subsequently separated from their children.

“Going forward, they will no longer bring criminal charges against a parent or parents entering the United States if they have their child with them,” wrote Maureen Scott Franco, the federal public defender for the Western District of Texas, in an email shown to the AP.

In the Texas border city of McAllen, federal prosecutors unexpectedly did not pursue charges against 17 immigrants. A federal prosecutor said “there was no prosecution sought” in light of Trump’s executive order ending the practice of separating families.

But the president showed no sign of softening in public remarks, even as Congress failed again to pass immigration reform.

Immigrants like Ever Castillo and Diva Funes were among those affected by the mixed signals from the U.S.

The couple from Comayagua, Honduras, arrived at the border Thursday and presented themselves for asylum with their five children, ages 1 to 12 years. Castillo said they did not know about the family separation policy when they began hitchhiking to the U.S. two weeks ago.

He said Border Patrol agents told them they would be separated if they entered the U.S., and they opted to walk back across the international bridge into Reynosa, Mexico. Rather than be separated from his children, “I said, ‘better that we head back to my country,’” said Castillo.

Other immigrants who remained locked up and separated from their families struggled to stay in touch with children who are in many cases hundreds of miles apart.

A 31-year-old Brazilian man held in Cibola County Correctional Center in Milan, New Mexico said he didn’t know when he would see his 9-year-old son again.

The father told the AP in a phone interview Thursday that he spoke to his son once by phone since they were separated 26 days before. The man, who is seeking asylum, spoke on condition of anonymity because he said in Brazil he is sought by a criminal gang for failure to pay an $8,000 debt, and fears retribution.

The man said he worried about his son, who only speaks Portuguese. “He cried. He was so sad,” the father said. “I had promised him it would only be three to five days.”

Thursday’s uncertainty resulted from the abrupt ending of a White House policy that separated more than 2,300 children from their parents over the past several weeks — part of the administration’s zero-tolerance immigration policy that was a signature campaign promise of Trump.

After Trump’s executive order, a host of unanswered questions remained, including what will happen to the children already separated from their parents and where the government will house all the newly detained migrants in an already overcrowded system.

The administration began drawing up plans to house as many as 20,000 migrants on U.S. military bases, though officials gave differing accounts as to whether those beds would be for children or for entire families. The Justice Department also went to court in an attempt to overturn a decades-old settlement that limits to 20 days the amount of time migrant children can be locked up with their families.

The Trump administration previously had not said whether any of the more 2,300 children separated from their families had been reunited. The official said many of the 500 children already reunited were back with their families within days of being separated. But other parents have said they didn’t know where their children were.

Meanwhile, the mayors of about 20 U.S. cities gathered at a holding facility for immigrant children in the border city of El Paso. They accused Trump of failing to address a crisis of his own making and called for the immediate reunification of immigrant children with their families.

First lady Melania Trump made a surprise visit to a McAllen detention center housing some of the children. She told the children to “be kind and nice to each other.”

The Arab monarchies’ religious basis of legitimacy proved sturdier than that of the Arab republics ... Read More...

NOC is still at a Rs 50 billion loss.  Who is then making the profit from higher prices of petroleum products?
10 minutes ago