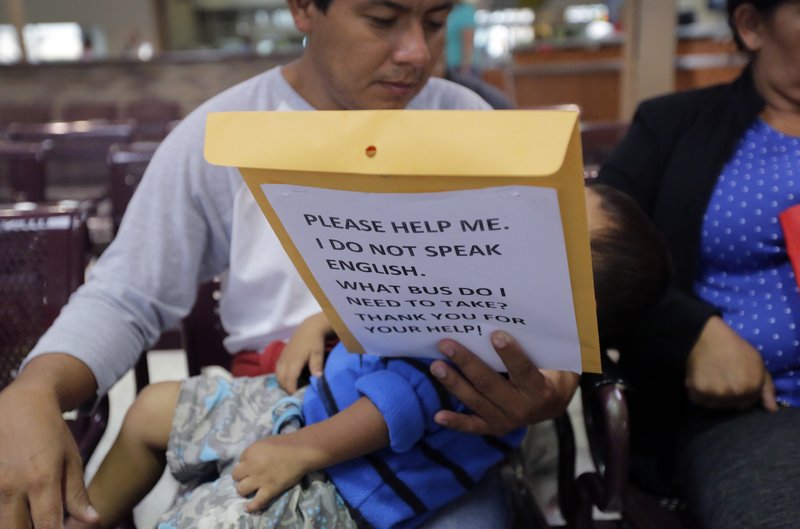 Immigrants from Guatemala seeking asylum look over travel packets as they wait at the bus station after they were processed and released by U.S. Customs and Border Protection, Thursday, June 21, 2018, in McAllen, Texas. President Donald Trump signed an executive order to end family separations at the border. (AP Photo/Eric Gay)

TEXAS, June 22: The U.S. government wrestled with the ramifications Thursday of President Donald Trump’s move to stop separating families at the border, with no clear plan to reunite the more than 2,300 children already taken from their parents and Congress again failing to take action on immigration reform.

In a day of confusion and conflicting reports, the Trump administration began drawing up plans to house as many as 20,000 migrants on U.S. military bases. But officials gave differing accounts as to whether those beds would be for children or for entire families. The Justice Department also went to court in an attempt to overturn a decades-old settlement that limits to 20 days the amount of time migrant children can be locked up with their families.

Meanwhile, the federal public defender’s office for the region that covers cases from El Paso to San Antonio said Thursday the U.S. Attorney’s Office would be dismissing cases in which parents were charged with illegally entering or re-entering the country and were subsequently separated from their children.

“Going forward, they will no longer bring criminal charges against a parent or parents entering the United States if they have their child with them,” wrote Maureen Scott Franco, the federal public defender for the Western District of Texas, in an email shown to The Associated Press.

And in the Texas border city of McAllen, federal prosecutors unexpectedly did not pursue charges against 17 immigrants. A federal prosecutor said “there was no prosecution sought” in light of Trump’s executive order ending the practice of separating families.

It was unclear whether that and the email meant the Trump administration was dropping its months-old “zero tolerance” policy of prosecuting all adults caught trying to enter the country illegally.

The president did not answer the question directly but showed no sign of softening.

The uncertainty resulted from the abrupt ending Wednesday of a White House policy that separated more than 2,300 children from their parents over the past several weeks. The practice set off an outcry from all corners of the world, with the images and sounds of crying children dominating the news.

After Trump’s executive order, a host of unanswered questions remained, including what will happen to the children already separated from their parents and where the government will house all the newly detained migrants, with the system already bursting at the seams.

Officials from the Defense Department and Health and Human Services said the Pentagon has agreed to provide space on military bases to hold up to 20,000 people detained after illegally crossing the Mexican border.

The Justice Department asked a federal judge to change the rules regarding the detention of immigrant children, seeking permission to detain them for longer than the permitted 20 days in an effort to keep them together with their parents.

Meanwhile, the mayors of about 20 U.S. cities gathered at a holding facility for immigrant children in the border city of El Paso. They accused Trump of failing to address a crisis of his own making.

They called for the immediate reunification of immigrant children with their families.

“This is a humanitarian crisis,” Seattle Mayor Jenny Durkan said.

Elsewhere, Democratic Gov. Ralph Northam of Virginia ordered an investigation into claims by children at an immigration detention facility that they were beaten while handcuffed and locked up for long periods in solitary confinement, left nude and shivering in concrete cells.

First lady Melania Trump made a surprise visit to a McAllen detention center that is housing some of the children. She told the children to “be kind and nice to each other.”

Asked about it, her spokeswoman Stephanie Grisham said: “It’s a jacket. There was no hidden message.”

Mrs. Trump was wearing a different jacket when the plane landed.

India to resume export of Covishield vaccines from next month, neighboring countries to get first priority
16 hours ago

International Day of Peace being observed today
41 minutes ago