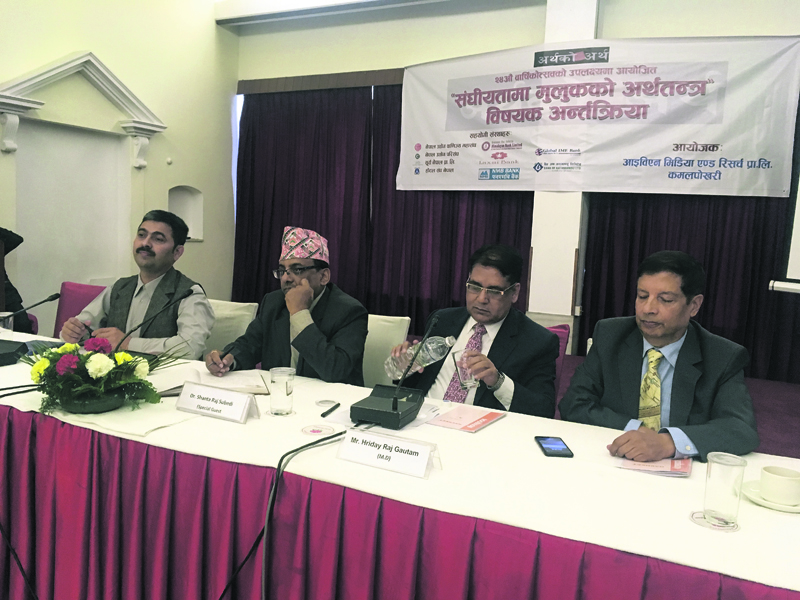 KATHMANDU, April 26: Economists and fiscal federalization analysts have warned that conflict could break out between provincial and local governments over exercising exclusive functions prescribed in the constitution in the federal setup .

Speaking at an interaction on 'Economy in Federalism' organized by IBN Media and Research in Kathmandu on Wednesday, they also urged the government to form National Natural Resources and Fiscal Commission to  determine  detailed  basis and modality for  sharing of revenue among federal, state and local governments from the Federal Consolidated Fund. “

Registration of house and land, vehicle tax, and entertainment tax, among other few functions, fall under both provincial and local government“. "The modality of collection and distribution should be made clear first so that there is no room for any confli”t," he added.
Another challenge in the federal system that economists and fiscal federalization analysts pointed out is related to budget transfer from the central level to the local level“. "There is some sort of understanding that each of the 744 local units would be receiving equal budget from the central government which is wro”g," Devkota sai“. "A standard should be made and the budget should be allocated to these units accordingly. There cannot be equal allocation of budget for a local unit with population of 50,000 in Banke and another in Humla with just 580 peop”e."

Also speaking at the interaction program, Shankar Sharma, an economist, urged the government to form the National Natural Resources and Fiscal Commission to deal on financial and fiscal issues in the federal setup so that there would not be any conflict between different tiers of government“

"The government and the political parties are delaying the commission. They have been saying that the commission should be formed in group along with other commissions as envisaged in the constitution. However, I think that it should be formed immediately to deal on fiscal and financial issues like revenue collection, distribution and expenditu”e," Sharma, who is also a former vice-chairman of the National Planning Commission, said.
He also warned of possible misuse and misappropriation of funds and budget at local level since the constitution has not given the central government the authority to suspend the lowest rung of the governmen“. "In the lack of such authority, there is a challenge to maintain fiscal discipline at the local lev”l," added Sharma.

Management of government employees is another key challenge initially, according to analyst“. "Setting up infrastructure in federal setup and management of employees would not only be a key challenge, but also a costly affair," added Sharma.