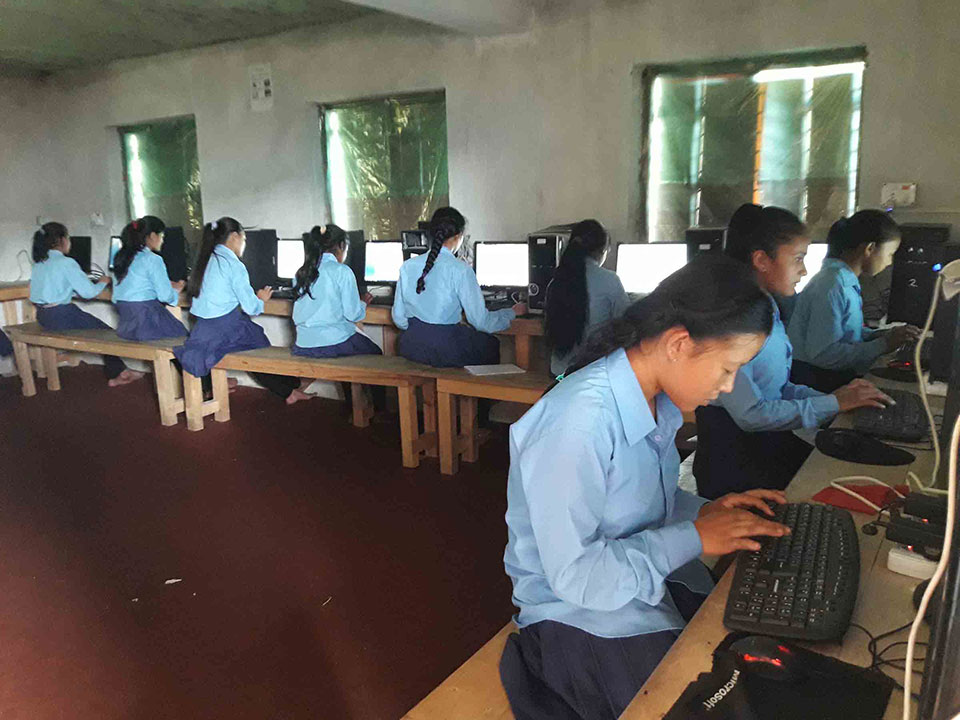 Students of Chisapani Secondary School practicing on computers in their school lab in this recent picture. Photo: Daman Rai

KHOTANG, Sept 8: Until three years ago, Pratima Sapkota of Jentedhunga Rural Municipality did not even know how a computer looks like. She would hear that kids in Kathmandu read and write on computer and that would make her feel dumbfounded. Now the 10th grader is a student of computer engineering at her school and she terms the technology as a ‘game changer’ in her life.

As a part of technical education, specific technical courses like this one have been introduced for secondary level students these days. The government has planned to cover at least two to three schools in a district under this project. In rural and disadvantaged locations, the courses seem to have quite touched the participating student’s life.

“It was hard to believe when people told me that computer is like a toy for kids in Kathmandu. I used to think computer is a very big deal,” said Sapkota, of Chisapani Secondary School. “Now, it feels funny remembering that I used to think that way. All of us at the school operate the computer very well,” added the student of computer engineering.

She told that computer is indeed a big deal for children in Khotang. ‘Not all schools have been able to give this facility to children’.

“However, we were lucky. Our school purchased computers three years ago. We welcome them with huge celebration back then,” she reported. “Had it not been for school, we would never be able to use it. Now computer class is so much fun,” she added.

Even in Khotang, most of the private schools have computer, library and laboratories. But community schools having those amenities feel like a big thing, according to Sapkota’s classmate, Rabin Bista.

“There are several schools we know that do not have computers, libraries, laboratories. In private ones, there are lots of stuffs for children,” he said.

Bista and Sapkota do not have very good typing speed yet. They are learning. While learning to type English, they are also enhancing their English language skills.

“We just feel great to realize that we are doing computer engineering. For that, we must hone our skills in every way possible. We have just begun to use computer, learned a little bit of theory, and there is lot more for us to learn,” said Bista. “While learning to type we are learning better English as well,” he added.

Among many vocational subjects under humanities, science and management, the two students had chosen to go with computer engineering. And they feel proud about their choice.

“I feel that I can now realize my dreams. If I can be a computer engineer in future, that would be great. Joining this course feels like a game changer in my life,” Sapkota said.

Students are offered to choose subjects or streams at 9th grade. Following the same line till 12th grade shape them in a certain way. “After completing my 12th standard,  I will be eligible to join computer engineering at the bachelors level. It is now just a matter of two more years,” she said, quite excitedly.

According to the school’s Principal, Ram Bahadur Raut, specific four-year courses offered at the school level have indeed the potential to produce professionals in future. He was of the opinion that such technical education must be extended even further.

“The government must make such courses available in all schools across the country. So far, only few community schools have been able to offer technical courses to their students. We have constraint of resources,” Raut maintained. He added that the computer courses at his school have elated not only children but also their parents.

“Parents are really very happy. This is the age of computer, and our kids are learning at school, they say,” he stated.

Currently, 96 students of 9 and 10 grades are pursuing computer engineering in the school. Raut reported that there is very huge craze among students for studying this subject and the school is planning to expand its present capacity. “We started it just two years ago. We have realized that we were actually late. There is a huge demand for studying this subject. Students are very excited, happy and sincere about it,” he noted.

The earlier batch of computer engineering did pretty well in exams. Their remarkable performance in SEE encouraged the entire school fraternity. “Computer lab is our students’ best place these days. Even our earlier batch did great in exam. We all are encouraged by their performance,” Raut said.

For the school established in 1963, the new laboratory full of computers is not just a learning center, but also a milestone for transformation. “Apparently, it looks like just another computer class, but for us, it is not just that. It is milestone for us, towards the journey of change. Our minds have opened, students and teachers are filled with confidence and dreams,” Raut stated.

Many teachers who are currently teaching computer in public schools grew up in an era when computers were virtually non-existent Read More...