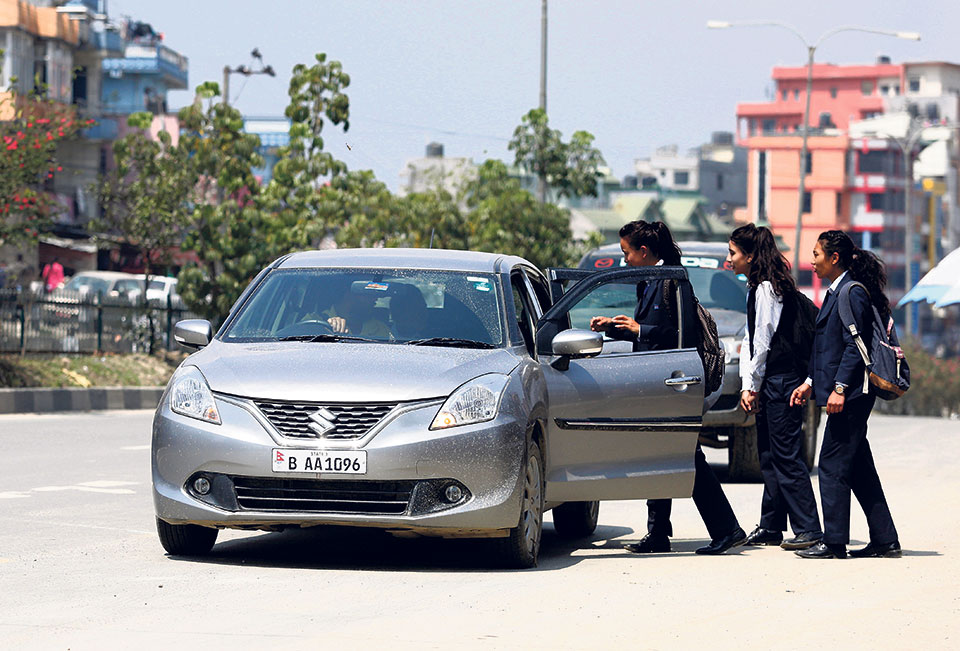 School students taking lift from a private car at Kaushaltar, Bhaktapur on Friday as most of the public buses remained off the road due to a strike called by transport operators. Photo: Dipesh Shrestha

KATHMANDU, May 5: As the protesting transport cartels shut down vehicular movement nationwide on Friday, the general public turned to the environment-friendly practice of carpooling to get around the transportation problem.

Roads of the Kathmandu Valley were quieter than usual with only private vehicles and a handful of public vehicles in operation. Commuters who took public transportation endured congested space as they rode in the limited number of public vehicles which operated on Friday.

And hundreds of others who could not get inside the already crammed public vehicles either walked or turned to carpooling as an alternate means of transportation. Needless to say, it was a big hassle for students, office goers and all sorts of commuters of all age.

“In the morning while trying to commute to my workplace at New Baneshwar, I could not get a public vehicle despite waiting for long. The situation was so bad that people were crammed inside the available public vehicles just like sheep and goats,” said Ramesh Khadka, a local of Pepsicola Town Planning.

Left with no other choice, he walked for around 15 minutes and then approached a bike rider for a lift. “The rider was very sympathetic and said we should help one another during such situations,” he added.

Other bike riders and car owners were also seen offering lift to the weary passengers on their own will. Sharing her experience, Kamala Mainali of Lokanthali said a bike rider in her locality stopped upon noticing desperate crowds waiting for public transport.

“The bike rider told the crowd that he is en route to New Road and can drop a person along the way. The situation was desperate and I requested, upon which he dropped me off at Min Bhawan where my office is located,” said Mainali.

In the face of the transport strike, there were many instances of private vehicle owners lending a helping hand to commuters. In Kaushaltar of Bhaktapur, a government vehicle was seen offering lift to young students who were likely heading for their exam centers. Elsewhere in the streets of Koteshwar, a private supplies vehicle was pictured carrying full loads of people on its truck bed.

Public transport companies including Sajha Yatayat and Mayur Yatayat among others offered full capacity services to the general public during the transport cartels' strike, lessening the public's hassles to some extent.

Despite weariness and hassles, the valley denizens expressed happiness for their role in defying the strike called by the transport cartels. Moreover, they urged the government to remain undeterred and take action to dismantle the syndicate, which has gripped much of the highways across the country.

“How long should we tolerate the cartel's tyranny? Let's support the government's bid to dismantle them. We are even willing to endure this suffering for a few more days if it means victory over the cartel and long-term benefits to the public,” added Mainali.

After failing to repeal Obamacare, Republicans in the U.S. Congress quickly pivoted on Friday to President Donald Trump's next priority:... Read More...