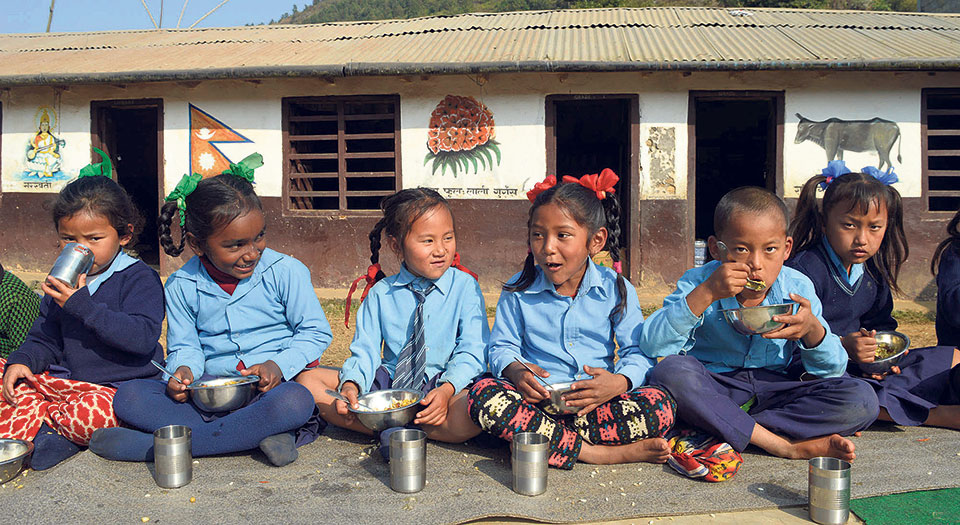 TANAHU, Dec 16: Providing well cooked and nutritious food to students during tiffin time is not an uncommon practice in private schools. However, this is hardly seen in community schools. But primary level community schools in Magde Rural Municipality are now practicing this trend. Since the last few weeks, children are being provided with school-made meals. And the initiative taken by the rural municipality is basically aimed at excluding junk foods from the student’s tiffin boxes.

“Children’s love for junk food is only growing. This is very unhealthy. Even parents are not aware of it and that is why they provide such food, without being concerned about the food’s health status,” stated vice chairperson of the municipality, Bal Krishna Ghimire.

Among the junk foods preferred by children, noodle top of the list. Citing information provided by schools, Ghimire informed that over 80 percent of children bring school noodle packets.

“Noodle cannot be a substitute of home-made snacks. But these days’ people want handy things to eat. Noodle is something rich, that all types of families prefer to send it for their children. According to the schools, children bring nothing but noodles for their school snacks. Over eighty percent of the children rely on noodle for their tiffin,” he elaborated.

Alarmingly, Ghimire stated that noodles found in the local shops are sometimes even outdated. And consumers hardly care about the date. “They do not check even the quality. Hardly anyone cares about the expiry date. This makes the matter worse.”

Under the new initiative of the rural municipality, 21 primary community schools are receiving budget for special mid-day meal for children. Rs 2 million has been allocated for this fiscal for this purpose.

“This decision was taken during our meeting. And the budget was passed unanimously. For now, that budget should be sufficient,” he said.

“It is not enough to provide a budget for feeding the children, we have to ensure that children are indeed getting what we intended to provide them. So, we have devised a system to ensure that. We inspect the practice regularly and randomly,” said Ghimire.

The mid-day meal is not just to avail nutritious meal to children but also to bring them to school regularly. Even though the government had earlier made it mandatory for schools to provide mid-day meal, this provision was later scrapped. This had even drawn flak from several quarters. However, some schools independently continued with the scheme. But ensuring quality was not reported as a priority. So, it is remarkable that this rural municipality has come up with the scheme highlighting the cause of junk food.

“We are both concerned about children’s regularity to school. In poor communities, dropping out is a huge problem. Similarly, our focus on how to counter the junk food craze among small to grown-up kids is very important,” Ghimire noted.

The rural municipality is also planning to expand the service to other schools, too. Next year, it expects to allocate more budget for this purpose.

According to Ram Krishna Ranabhat, a teacher of Ravi Chandra Primary School of Myagde - 3, earlier one student would spend Rs 40 to 50 for junk food each day. But now, the cost is much lower and they are getting a far better quality of food.

“They would spend around Rs 50. Let’s say Rs 40 to 50 for a snack. Things like wai-wai, cheese ball, biscuits were their preference. Only a few, whose parents would not provide money would not have it, many would drop due to poverty as well,” Ranabhat said. “But now, the cost is much lower. And schools are providing far better meals. Freshly made house food. Students are also happy about it,” he added.

“The children get jaulo or kheer or haluwa or daal-bhat and so on depending on what day is it. They are not given any unhealthy foodstuffs,” Tiwari said. “When the meal is prepared for the mass, expenses for one child on an average reaches around Rs 20,” he added.

There are a total of 31 community schools in the rural municipality.

BHAIRAHAWA, April 28: At a time when schools across the country are trying several means to attract students, Siyari Rural... Read More...

Raute people gear up to celebrate Dashain
4 hours ago