Communist govt did nothing except selling dreams: NC leader Poudel 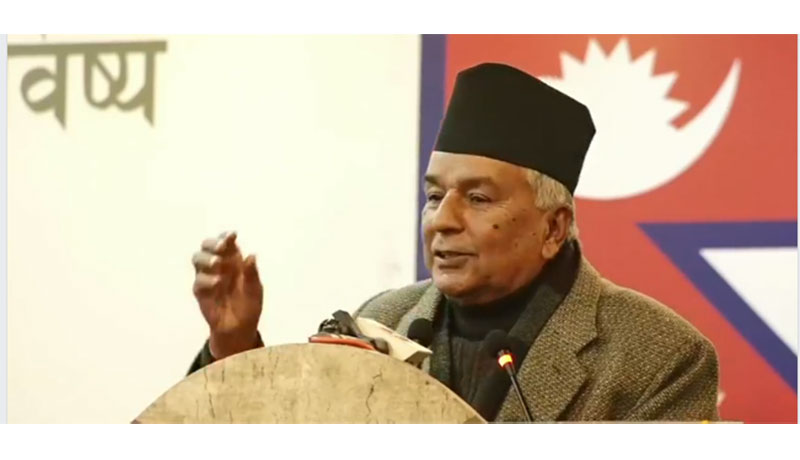 ROLPA, Sept 25: Senior leader of the main opposition Nepali Congress Ram Chandra Poudel has accused the government of doing nothing except selling fake dreams among the people after it came to power two years ago.

Poudel, who is in Rolpa to address the concluding ceremony of his party's Second-phase Public Awareness Campaign, claimed that the ruling party has been misusing the people's mandate with a two-third majority in the parliament. “People are in trouble due to excessive taxation and growing corruption in the country. The powerful communist government is failing to address these issues; which is really disappointing,” argued Poudel.

According to Poudel, Nepali communists are now advocating "Xi path" to impose autocratic rule in the country who would talk about Mao, Marx, and Lenin in the past.

"We want the government to carry out development activities. That’s why we're calm and tolerant. However, they have already started the anarchic rule. In the past our party fought hard against the Ranas, the Panchyat and even Monarchy, therefore we are capable enough to tackle the communists too," he warned.

Blaming the government for ignoring people's fundamental rights as enshrined in the Constitution, he stated that his party would prevent the government from heading towards authoritarian rule.

Another NC leader Dr Govinda Pokharel, who had also served as the vice-chairperson of National Planning Commission, also addressed the program.

KATHMANDU, Sept 8: The main opposition Nepali Congress has deputed its central representatives for the second phase of a national... Read More...

Next leadership of NC on consensus: leader Poudel