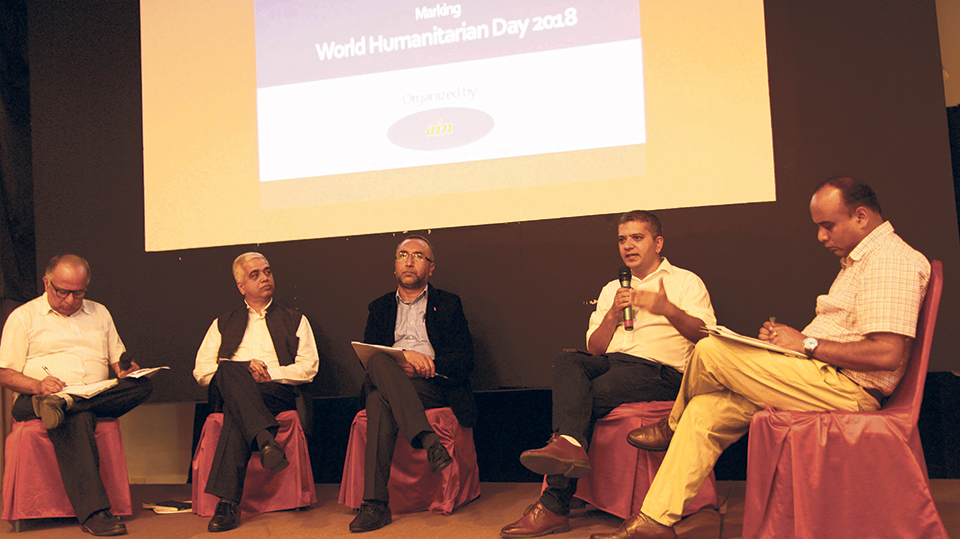 KATHMANDU, Aug 24: Representatives from the government, media and international organizations have stressed the need for collective efforts to respond better to potential crises. The representatives said so during a discussion titled “Better Responding to Crises” organized by the Association of International NGOs (AIN).

Reflecting on the 2015 earthquakes that killed more than 8,000 people in 32 districts, 14 of which were worst affected, speakers highlighted the need to direct efforts toward disaster risk reduction (DRR).

According to the Asian Disaster Reduction Center, Nepal is one of the most hazard-prone countries in the world and it ranks 4th, 11th and 30th in terms of climate change, earthquake and flood risk respectively. Despite the risks, Bamsi Kumar Acharya, under-secretary at the Ministry of Home Affairs said that at present, there are gaps in government's efforts to address crisis, most of which is largely 'event based'.

The government's focus has rested largely in addressing immediate post-disaster needs. He acknowledged that the government lagged behind in long-term 'overall' disaster management, a process that includes risk reduction, recovery and rehabilitation.

During the two-hour function, speakers also highlighted the need of open spaces and the role of media during any disaster outbreak or humanitarian emergency.

Subhash Ghimire, Republica editor-in-chief said the Nepali media exercised great sensitivity while reporting the earthquakes. “In doing so, we have used all of our available resources to inform the public about the safety precautions during calamities.”

Delay in reconstruction of classrooms affecting children’s education in Sindhuli

CHITWAN, May 18: Construction works as per the bio-engineering techniques have been intensified to stabilize slopes and prevent soil erosion and... Read More...