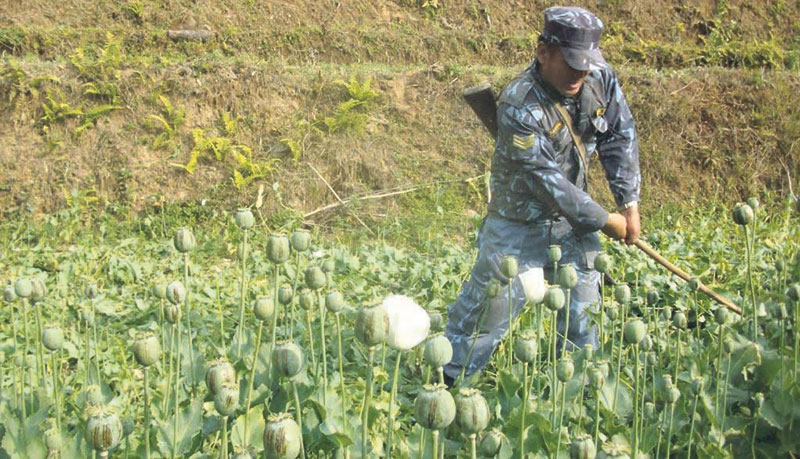 Considering the sensitivity of the issue, various governments spend more on controlling drug smuggling and drug abuse than they spend on military expenditure and infrastructure development. This shows that drug menace has become a major issue across the globe. But in Nepal, drug trafficking is seldom debated.

Available statistics suggest that a great number of Nepali youths and children take drugs. A Central Bureau of Statistics survey in 2012 put the number of hard-drug users in Nepal at 91,534, with 70,390 drug-users below the age of 30. Around 95 percent drug users took drugs for the first time before they reached 25 years, according to the survey.

Investment in curbing drug-related crimes has increased abroad. But in Nepal, only Rs 16 million has been spent in the current fiscal on different awareness campaigns, treatment, rehabilitation and training of drug-addicts, among other things.  Policymakers seem unaware about its alarming consequences.

Except for these attempts and a few successful operations, neither government bodies nor NGO/INGOs working in the field have focused on demand reduction. Their focus is harm reduction. Media coverage on drug related issues is not adequate. This is alarming.

Taking advantage of this situation, drug mafia, kingpins behind the rackets and criminal groups have been emboldened. They use the poor, women and jobless youths for their illegal trade. These small fries are the ones arrested most of the times. The kingpins escape.

Existing policies on controlling drug flow are ineffective and penalties against related offences are nominal. Illicit trade will continue to flourish so long as our focus remains putting drug peddlers behind the bars, instead of intervening in the illegal drug economy that includes production, trafficking and distribution. Needless to say, most illicit drug businesses are operated in off-the-roads areas and over the internet. Our intervention and monitoring mechanism have not been able to dismantle the nexus. So what should be done?

The Narcotic Control Bureau (NCB) is based in Kathmandu and has few units in bordering towns with India. Besides, NCB works with limited budget and limited jurisdiction and expertise. No wonder it is struggling. The role of NCB should not be limited to dealing with drug abusers and former abusers. Besides, such agencies should be empowered with more funds and manpower.

Likewise, the Department of Drug Administration (DDA) under the Ministry of Health hardly monitors medical centers and pharmacies in the lack of adequate human resources, creating a fertile ground for illegal pharmaceutical drug dealers. DDA should also be empowered with more funds and action-oriented human resources.

Teenagers are the most vulnerable to drug addiction. As a person enters second decade of his life, he undergoes physical, social and psychological changes. This is the period when a person seeks to experiment, including trying drugs. The youth in this phase of their life maintain distance from parents, and grow independent and rebellious. Thus just requesting teenagers not to use drugs won’t help.

The teenage students could be consuming drugs secretly. Neither teachers nor parents seem aware of this. This parents-students gap reflects the gap between our policies and problems as well. Awareness campaign can be helpful. The attempt of mushrooming rehabilitation centers to change the lives of the drug users has failed as they focus on negative (“don’t do this”) instead of the more beneficial affirmative approach (“do this”).

Huge numbers of security personnel are deployed round the clock to control drunk-driving. The security bodies need to launch similar program to control drug consumption and trafficking as well.

Globally, illicit drug trade has surged in the last four decades and many measures have been taken to combat it internationally. In Nepal, our response has been limited to marking International Day against Drug Abuse and Illicit Trafficking every June 26th.

Such occasions remind us all of our duty to work towards a society free of drug abuse, but this alone will not be enough. Unless there is collective effort involving media, the public sector, the private sector, the NGOs, and meaningful awareness campaigns with active participation of parents, youth and law enforcement agencies, our dream for drug-free society might never be realized.

The author is with political bureau of Republica

Singer The Weeknd still turns to drugs when he needs help with his music. ... Read More...

KMC permits all schools to reopen physical classes
12 hours ago