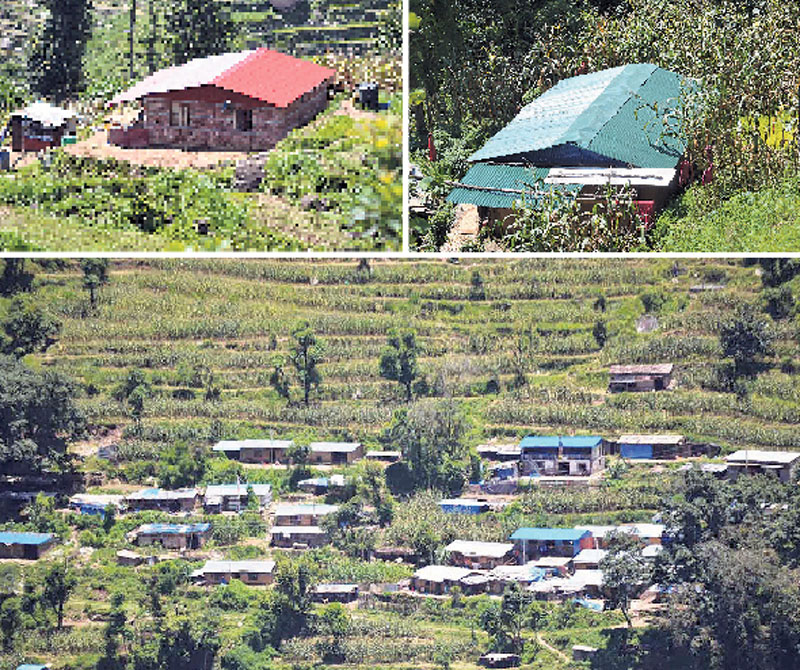 Houses with colorful roofing sheets in various villages in Sindhupalchowk.

SINDHUPALCHOWK, July 23: When rays from the setting sun hit the Bisingar village of Sindhupalchowk's Jugal Rural Municipality, the village shimmers colorfully in the twilight. Rooftops of red, green, blue and other colors give a beautiful look to the village which was completely ravaged by the 7.8 magnitude earthquake of April 25, 2015.

Seeing the village change from a state of total devastation, Buddhi Singh Tamang, 74, elates in happiness. He moved into a blue-roofed house two months ago. “The quake had given us massive problems. Two years ago, our village was nothing but a mountainous pile of debris. At that time, I did not imagine that the village's face would be changed so soon,” he said, “Devastation brings not only challenges but also opportunities.”

According to him, Bisingar was full of traditional houses before the earthquake. “The houses had been constructed haphazardly, affecting the beauty of our village. But now things are different. The earthquake taught us a very important lesson,” he told Republica.

Another local, Dil Mai Tamang, is also happy to get a new home. “We decided to make our settlement visually pleasing and organized, and embraced technology to achieve that,” said the 70-year-old. She shared that she spent about Rs 300,000 to rebuild her house.

This rural municipality of Sindhupalchowk is one of the remotest parts of the district. This local unit includes villages such as Gumba, Golche, Selang, Pangtang and Belamchi. Rebuilding most houses destroyed by the quake in these villages has been completed recently.

Colorful settlements are becoming the identity of the district which was one of the hardest-hit by the quake. From Tatopani in the east to Helambu in the west, reconstruction is going on in speed. Many houses have already been erected while others are in the process of being rebuilt.

The government agencies do not have reliable data on the number of houses constructed or under-construction. As per the data of the Urban Development and Building Construction Division of the district, over 10,000 houses are currently under-reconstruction. However, their data suggests that the reconstruction of less than 100 houses has been completed so far.

Government officials, on the other hand, are not ready to believe their own data. They estimate that about 30,000 houses in the district have been reconstructed after the quake.

Many quake victims have left their temporary houses and shifted to their newly-constructed permanent houses. “We have not been able to collect actual data due to the lack of sufficient human resources,” said Dr Yuwaraj Paudel, chief of the division.

The Dhurmus-Suntali Foundation alone has constructed 150 houses in Giranchaur under their integrated settlement project. Quake victims in other parts of the district have taken their cue from the project and have applied the knowledge in reconstructing their settlements.

Tahira Banu believes, “Allah will help those who are in the way of Allah”.  Currently settled in Patan, Banu spent... Read More...

RAJBIRAJ, Jan 4: A fire in Boriya VDC of Saptari on Tuesday killed livestock and gutted properties worth Rs 500,000. Read More...

JAMBU, July 7: A sudden flood in Bhotekoshi River on Tuesday night swept away at least 21 houses of Tatopani... Read More...