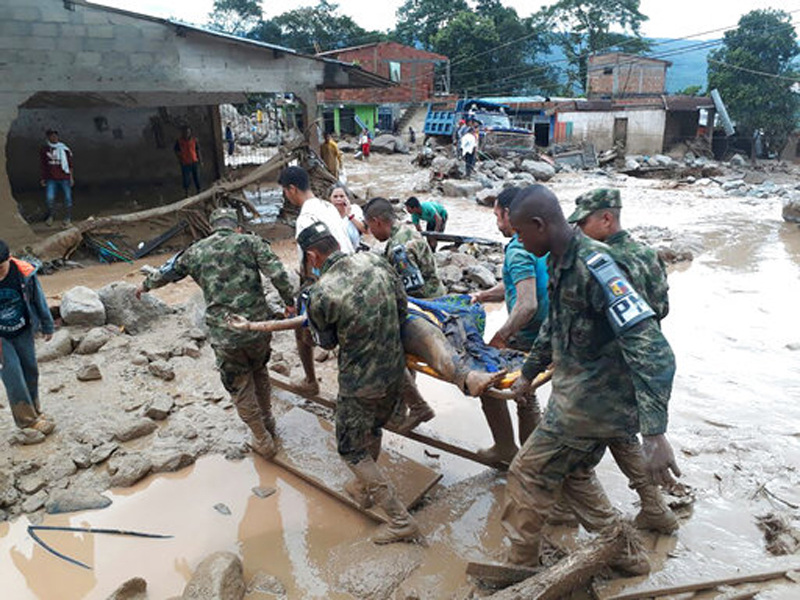 BOGOTA, Colombia (AP) — An avalanche of water from three overflowing rivers tore through a small city in Colombia while people slept, destroying homes, sweeping away cars and killing at least 193 unsuspecting residents.

The incident triggered by a sudden, heavy rainstorm happened around midnight and into early Saturday in Mocoa, a provincial capital of about 40,000 tucked between mountains near Colombia's southern border with Ecuador.

Muddy water quickly surged through the city's streets, toppling homes, ripping trees from their roots and carrying a torrent of rocks and debris downstream. Many residents did not have enough time to flee.

According to the Red Cross, 202 people were injured and 220 believed missing. President Juan Manuel Santos declared a state of emergency and said the death toll will likely rise but warned against speculating about how many are dead. Late Saturday, he said the toll had reached 193.

"We don't know how many there are going to be," he said of the fatalities when he arrived at the disaster zone to oversee rescue efforts. "We're still looking."

Eduardo Vargas, 29, was asleep with his wife and 7-month-old baby when he was awoken by the sound of neighbors banging on his door. He quickly grabbed his family and fled up a small mountain amid the cries of people in panic.

"There was no time for anything," he said.

Vargas and his family huddled with about two dozen other residents as rocks, trees and wooden planks ripped through their neighborhood below. They waited there until daylight, when members of the military helped them down.

When he reached the site of his home Saturday, nothing his family left behind remained.

"Thank God we have our lives," he said.

As rescuers assessed the full scope of the damage, many residents in Mocoa continued a desperate search for friends and relatives.

Oscar Londono tried in vain throughout the night to reach his wife's parents, whose home is right along one of the flooded rivers. He decided it was too dangerous to try to reach them in the dark. So he called over and over by phone but got no answer.

Once the sun began to rise he started walking toward their house but found all the streets he usually takes missing. As he tried to orient himself he came across the body of a young woman dressed in a mini-skirt and black blouse.

He checked her pulse but could not find one.

"There were bodies all over," he said.

When he finally reached the neighborhood where his in-laws live he found "just mud and rocks." Rescue workers with the military oriented him toward the mountain, where he found his relatives camped with other survivors.

"To know they were alive," he said, "it was a reunion of tears."

Santos said at least 22 people were seriously injured and being airlifted to nearby cities, as the small regional hospital in Mocoa struggled to cope with the magnitude of the crisis. Herman Granados, an anesthesiologist, said he worked throughout the night on victims, cleaning wounds. He said the hospital doesn't have a blood bank large enough to deal with the number of patients and was quickly running out of its supply.

Some of the hospital workers came to help even while there are own relatives remained missing.

"Under the mud," Granados said, "I am sure there are many more."

The Red Cross planned to set up a special unit in Mocoa Saturday afternoon to help relatives search for their loved ones.

"In this moment, it's chaos," said Oscar Forero, a spokesman with the Colombian Red Cross. "There are many people missing."

Santos blamed climate change for triggering the avalanche, saying that the accumulated rainfall in one night was almost half the amount Mocoa normally receives in the entire month of March. With the rainy season in much of Colombia just beginning, he said local and national authorities need to redouble their efforts to prevent a similar tragedy.

The crisis is likely to be remembered as one of the worst natural disasters in recent Colombian history, though the Andean nation has experienced even more destructive catastrophes. Nearly 25,000 people were killed in 1985 after the Nevado del Ruiz volcano erupted and triggered a deluge of mud and debris that buried the town of Armero.

China not to alter course of rivers flowing into Nepal

KATHMANDU, Jan 24: China has agreed not to deliberately change or cause to change the course of any trans-boundary rivers... Read More...

KAZAN, June 25: Colombia’s World Cup campaign roared back into life with a thumping 3-0 victory over Poland on Sunday which... Read More...

42 metrics tonnes of garbage managed from major rivers in Valley

KATHMANDU, May 20: As high as 42 metric tonnes of garbage was collected and managed from various rivers and ring... Read More...