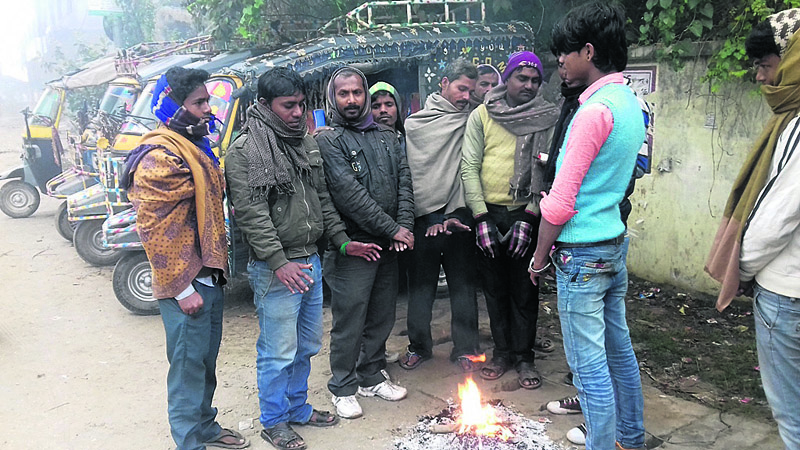 KATHMANDU, Dec 13: Numbers of pneumonia, cold and cough patients have risen significantly in the eastern Tarai region since the past few days. Due to the dipping temperature schools and colleges have not been able to operate well and opening hours of markets have been pushed into afternoon. Cold wave and poor visibility has equally affected flights and roadways in the region.

“Cold has taken its toll in the Tarai region. Elderly people and children are falling sick,” Dilip Subedi, a health worker based in Kakadbhitta, said.

Thick fog through out the morning hours has made it difficult for residents in the region to carry out their daily chores. “Patients suffering from cold-related ailments have increased substantially in Mechi Hospital and other health facilities in the area,” Subedi said.

He informed that most of the children seeking medical consultation since the cold wave started are suffering from chest related ailments. Asthma patients have also been facing acute health problems. “On top of the increase in cold, there is lack of medicine for asthma and other cold related illnesses in hospitals and health posts. If medical stocks in health facilities are not replenished immediately, it is going to be very difficult for such patients.” He informed that poor people who can’t afford medicines will be worst affected, if authorities fail to respond in time.

Dr Rabin Regmi at the Mechi Hospital warned that more people are going to be affected if the cold wave continues. “The cold wave is so strong this year that even we are finding it hard to sustain, let alone old people and small children,” he said. Most of his patients, he informed, have been complaining of throat and chest ailments in the recent days.

Shankar KC, a businessman in Birtamod stated that the cold has incurred loss to his business. “When your shop remains closed till late noon, how can you earn?” he asked complaining that the business was struggling to recover from the loss incurred last year’s earthquake and the Indian blockade.

“People have stopped coming to market even during the day. This has brought down the sales. They have dipped down by 40 percent compared to the sales before the cold wave started,” he informed.

Meraj Ansari of Jaleshwor alluded that the low mobility in the market to poor visibility that has engulfed the region since the past few days. Carts, rickshaws, four wheelers and two wheelers are rarely seen in street expect during the day, he said. “When vehicles are not able to ply on street, how can market operate and earn?” he questioned expressing concerns for the poor people who cannot afford warm clothes and blankets to stave off cold.

In Mahottari two families have claimed of loosing family members to cold. Deceased Shalavdevi Sada, 65 and Nathuli Paswan, 70 have been reported to have been victims of cold. District Police Office is yet to verify their claims.

For poor people the terror of cold wave is back and like in the past this time also they don’t have any means to escape it. “Our day long hard labor does not even suffice for our family’s daily meals. In such a condition, how is it possible to buy warm clothes?” Palas Sadaya, a Dalit from Sitapur, whose family relies on daily wages to sustain, said.

“Getting ill when you don’t have enough to eat, brings a lot of problem to poor families. Everything goes out of proportion and control,” she said adding that cold is no less terrifying than death-call for poor families like hers.

Though some of these poor families do manage to stave off the cold through charcoal fire, many succumb to suffocation. Sadaya said many people in her community have succumbed to cold in the past and a number of these deaths were because of suffocation from charcoal fire.

(Ajit Tiwari from Biratnagar, Raju Adhikari from Jhapa, Amar Khadka from Itahari, Mithilesh Yadav from Lahan, Suresh Yadav from Janakpur and Mahesh Kumar Das from Mahottari contributed to this report.) GAUSHALA, Dec 9: With the winter season in full swing, various districts in southern plain including Mahottari, is witnessing the... Read More...