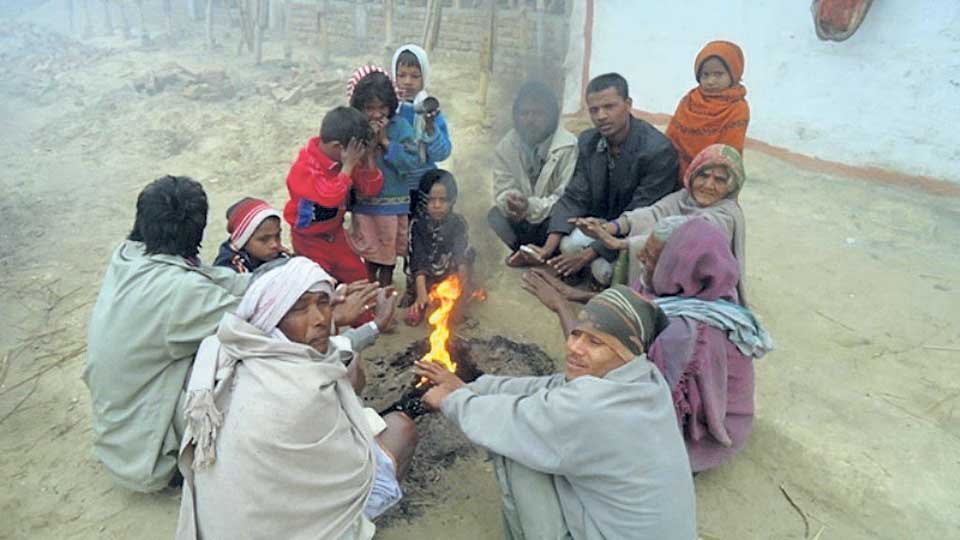 Locals of Birgunj around a fire on Saturday to keep warm against the cold wave that has affected life across the tarai districts. Photo: Republica

KATHMANDU, Jan 6: With the temperature continuing to dip each day, the biting cold of the winter has severely affected life in various districts in the tarai region. Cold has especially hit hard Saptari, Mahottari and Siraha of the tarai belt.

The situation is even worse for residents of Saptari who lost their homes in the floods of the last monsoon. Before they could recover from the setbacks of the floods, cold waves are already starting to make their lives harder.

Flood victims in Sakarapura village of Tilathi Koiladi Rural Municipality of the district neither have proper shelter nor the warm clothes. The settlement was completely inundated last monsoon after a dam in Khando River broke. The floods had inundated over 1,000 houses in the settlements, robbing them of the much needed necessities to survive the winter. Elderly people, women and children have been affected alike.

“We have not been able to rebuild our damaged house. This temporary hut does not offer help against the cold,” said Somiya Devi Mandal, 70, a local. “We are suffering as we do not have warm clothes. We only have hay brought from others' farms to keep ourselves warm,” she added.

Another elderly, Sakal Dev Mandal, 75, said he lost his family members in the last floods. “Now the winter has come to take me too,” he added. More than 150 families of flood victims are suffering in similar ways.

Kajari Marik of Launiya-9 said she is more worried about her children this winter. “We don't have home and warm clothes. How can we survive the cold depending only on straws?”

Community schools of the district have been shut since Thursday. Schools would remain closed for four more days due to cold, according to District Education Officer Dol Raj Panday.

“There is no sign that the weather would improve. Days are only getting colder, which is why we instructed the schools to remain closed until coming Wednesday,” he said. The district has 412 community schools.

The sudden cold has made life very difficult for rural and urban communities in Mahottari as well. With cold on the rise, underprivileged Dalits and other poverty-stricken communities are worried about their survival this winter.

Laborers who depend on pulling carts and rickshaws for livelihoods said the biting cold has affected their work, making it difficult to even make enough for daily foods. “There aren't many passengers we can pick up since everyone decides to remain home due to the growing cold,” said Jirenkhan Paswan, a rickshaw puller of Jalehwar-2.

Porters and other daily wage laborers also are severely affected as well. Kalpi Pashwan of Jaleshwar-4 said hardly people give them work these days.

The effect of cold is very evident. Busy marketplaces in the district are seeing less movement of people. Children stay back home instead of going to school. The number of service seekers in government offices has also dwindled.

Likewise, hospitals are witnessing a rise in patients with pneumonia, cold diarrhea and common cold, according to the hospital. Doctors said they have seen about 30 percent increase in patients seeking treatment of cold-related diseases.

Thick fogs have also affected Siraha and Rautahat districts as the temperature continues to dip. As many as nine people have already died in the two districts due to the ongoing cold waves.

“If there indeed are Gods, they are cruel,” said Laxmi Sadaya of Lahan-1, Siraha. She makes a little money through daily-wage labor. However, it is enough only to buy daily bread. “It's not enough to have both food and warmth,” she said.

Cold waves have added woes to hundreds of daily wage laborers like her. Many of them do not even attempt to venture out of their houses to seek work in lack of warm clothes. Poor people are only survived by straws, which they get from working on farms of others. They use straws to sleep, cover themselves from cold and light fire.

BIRATNAGAR, March 7: A banda called Tuesday by the United Democratic Madhesi Front (UDMF) to protest the killings of protesters in Saptari... Read More...

KATHMANDU, Dec 13: Numbers of pneumonia, cold and cough patients have risen significantly in the eastern Tarai region since the past... Read More...