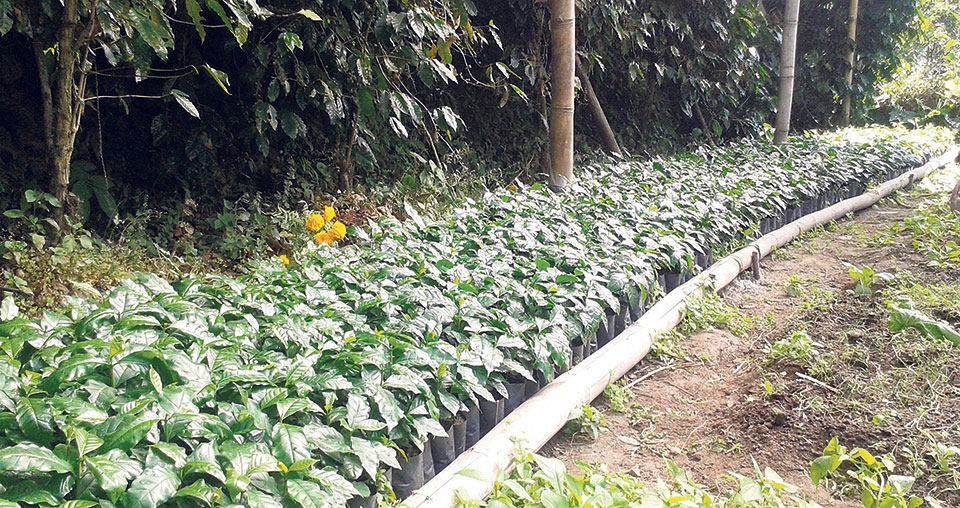 KASKI, Nov 18: Though the area of coffee farming has increased, the production has not gone up much. Coffee is farmed in most of districts of the western region except the mountainous areas. However, the production of coffee has not risen as expected.

Farmers in Kaski, Syangja, Tanahu, Parbat, Gulmi, Baglung, Myagdi, Tanahu and Gorkha, among other districts, are commercially farming coffee. However, there has not been a significant rise in the production due to the lack of improvement in farming system, inability to control pest and insect attack, and lack of proper management, among other problems, according to Chandra Puri, an agricultural development officer at National Coffee Development Board’s regional office in Pokhara.

Except Rupandehi, Nawalparasi, Kapilvastu, Manang and Mustang, all other districts in the western region produce coffee. Puri said that these districts have seen expansion in the areas of coffee production in the current year compared to the last year.

Coffee is being cultivated in 625 hectares in 11 districts of the western region in this year, which is 100 hectares more than the last year.

“Not only external factors but climate change, drought and other adverse environmental conditions also impacted the production of coffee in these districts,” said Puri. Other districts’ situation was also not so different, he added.

A disease named Sindure in the coffee plants led to nearly 20 percent decline of coffee production, Puri estimated. Insects named Seto Gabaro have also attacked coffee plants in districts like Gulmi, Palpa, Gorkha, Arghakhanchi, Parbat, Syangja and Kaski, among others, according to Puri. He said that many farmers were compelled to cut coffee plants due to this insect.

However, the board expects increased production in the next two years. According to the board officials, it has been holding trainings and distributing better plants to farmers, besides the fact that farmers are using modern technology, which is likely to increase production.

KATHMANDU, Jan 21: As an indication of growing coffee culture in the country, coffee consumption is on the rise in recent... Read More...

KATHMANDU, March 20: The government has dispatched a team to study sugar production cost in different parts of the country. ... Read More...