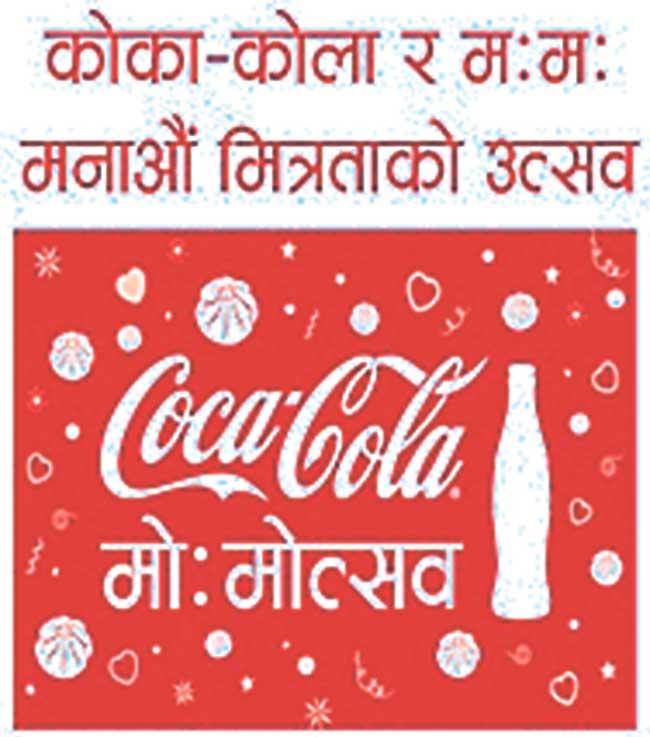 KATHMANDU, Jan 19: Coca-Cola is all set to launch Mo:motsav campaign this year as well. Issuing a statement on Thursday, Coca-Cola said that the combination of Coca-Cola and food is a global tradition and a favorite combination for millions of consumers daily.

Localizing this global tradition in Nepal, Coca-Cola has partnered with leading restaurant chains and eating joints for Coca-Cola Mo:motsav 2074, the company added in the statement. Coca Cola further added that the campaign celebrates Nepalis' favourite food mo:mo, with special combo offers and discounts across over 1,000 outlets in Nepal.

"As a part of Mo:motsav, every week lucky consumers will get a golden chance to enjoy special combos available in outlets across the country, along with their most loved celebrities.

During the campaign, in certain outlets, consumers will get great discounts with the combo of Coca-Cola and mo:mo," the company added in the statement. Mo:motsav will take place across various restaurants and eateries in Kathmandu Valley, Pokhara, Chitwan, Dharan, Itahari, and Biratnagar.

KATHMANDU (REPUBLICA): Coca-Cola has partnered with leading restaurants and eating joints all over the country for a unique campaign 'Coca-Cola... Read More...

KATHMANDU, Jan 31: Swastima Khadka, one of the most celebrated actresses in Nepal, visited different outlets to sample the delicious... Read More...

KATHMANDU, Feb 9: Coca-Cola has brought Mo:motsav campaign back to its valued consumers. “Coca-Cola and Food is a global tradition... Read More...