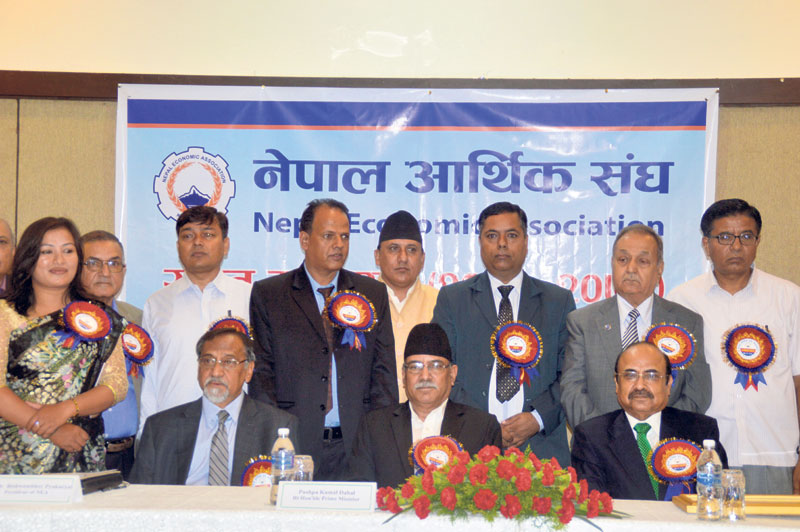 KATHMANDU, Sept 7: Economics and experts have said that a huge gap between financial resources and needs of various provinces will be one of the major challenges when the country embraces federal setup.

They have opined that the governments at the various levels in the federal structures should increase their capacity to boost their resources for bridging the huge gap between their expenses and income.

Presenting a paper entitled 'Inter-Governmental Financial Relationship: Implementation, Challenges and Way Out' at a program organized by Nepal Economic Association in Kathmandu on Tuesday, Govinda Nepal and Khim Lal Devkota pointed out the huge gap between the resources and the needs of many provinces in the federal set up“ "It seems that the federal structure will be a costly affair for us. Most of the provinces would not be able to sustain from the resources that they are entitled to collect or receive in the current scenario," said Devkota.

Senior Economist Bishwambher Pyakuryal also said that most of the seven provinces in the federal structure do not have the resources to finance even their basic needs.

"Except three or four provinces, other provinces lack the resources to finance their basic infrastructures like roads, drinking water and sanitation, among others," said Pyakuryal.

"Most of these provinces will not be able to stand on their own, requiring central government to transfer huge resources every year. The focus should now be on making these provinces capable of generating their resources through appropriate taxation and other means," he added. "Otherwise, there is a danger of creating a poor state and a rich state within a country," warned Pyakuryal.

PM Dahal for capitalizing remittances
Prime Minister Pushpa Kamal Dahal has said that his government would treat remittances as a capital to create jobs within the country. "At a time when the country is observing rising trade deficit, remittance inflow has helped us to maintain the capital account surplus," Dahal, speaking at the program.

He also pledged to work on a war footing for post-quake reconstruction and revival of the economy. "The country faced difficult situation in the last fiscal year. The earthquake first disrupted the public life and economy. Later, the trade disruption in border areas pushed the economic indicators toward negative direction," he added.

Meanwhile, economists have urged the government to raise the issue of Indian ban on ginger import from Nepal at the diplomatic level. "The Prime Minister is planning to visit India soon. Not only energy, we have many other issues to discuss during his India visit. The agenda of deeper regional integration should be our priority as well as the issue of ginger export from Nepal," added Pyakuryal.

How do we narrow the gap between private and public school?