Clinging on to her job, Britain's May appoints new ministers 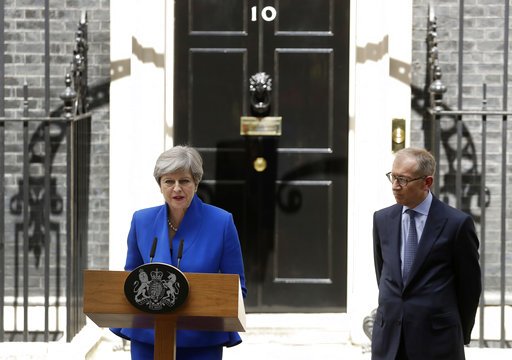 LONDON, June 10: Beleaguered British Prime Minister Theresa May was working to fill out the ranks of her minority government Saturday after an election that proved disastrous for her Conservative Party and complicating for Britain's exit from the European Union.

May's office has said that the most senior Cabinet members — including Treasury chief Philip Hammond, Foreign Secretary Boris Johnson and Home Secretary Amber Rudd — will keep their jobs, but she is expected to shuffle the lower ranks of ministers.

Several ministers lost their seats in Thursday's election, which saw the Conservatives lose their majority in Parliament. May's party won 318 seats, eight short of the 326 they needed for an outright majority. The main opposition Labour Party took 262.

May announced the party would try to work with Northern Ireland's Democratic Unionist Party, an alliance that is fraught with difficulties.

The DUP whose 10 seats would allow the government to get measures through Parliament, is a socially conservative pro-British Protestant group that opposes abortion and same-sex marriage and includes both environmentalists and climate-change deniers among its senior ranks.

Ruth Davidson, the Conservative leader in Scotland, said she had asked May for assurances that there would be no attack on gay rights after a deal with the DUP.

Northern Ireland is the only part of the U.K. in which same-sex marriage is illegal.

"It's an issue very close to my heart and one that I wanted categoric assurances from the prime minister on, and I received (them)," said Davidson, who is engaged to be married to her female partner.

May's authority over her party was shattered by the election result. She called the early election with her party comfortably ahead in the polls in the hope of increasing her majority and strengthening Britain's hand in exit talks with the European Union.

Instead, the result has sown confusion and division in British ranks, just days before negotiations are due to start on June 19.

Labour leader Jeremy Corbyn, riding a wave of acclaim for his party's unexpectedly strong showing, called on May to resign.

She seems secure for the immediate future, because senior Conservatives don't want to plunge the party into a damaging leadership contest. But Britain's Saturday newspapers agreed she is just clinging on.

"May fights to remain PM," said the front page of the Daily Telegraph, while the Times of London said: "May stares into the abyss."

She recently admitted to having vaser liposuction to remove her 'lumps and bumps'. ... Read More...