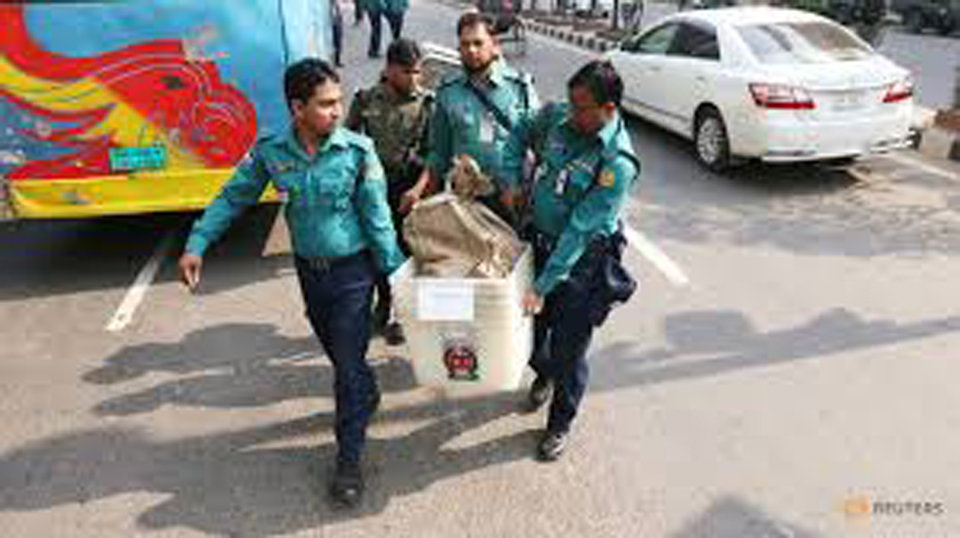 DHAKA, Dec 30 : Clashes between supporters of Bangladesh’s ruling party and its opponents killed two people and wounded nearly a dozen on Sunday, a government official and police said, as the country voted in a general election after violence-plagued campaigns.

Reuters reporters across the country of 165 million people saw sparse turnout at polling booths in the first fully competitive general election in a decade widely expected to be won by Prime Minister Sheikh Hasina, giving her a third straight term in office.

Mobile internet was blocked and the streets of the capital were largely deserted as many had left to vote in their home towns. Others were seen trickling into polling booths, where posters bearing the ruling Awami League’s “boat” symbol far outnumbered those of the opposition.

Mahbub Talukdar, one of the five election commissioners who stirred a controversy last week by saying there was no level-playing field for the parties, told Reuters he did not see any opposition polling agents near the Dhaka booth where he voted, suggesting they had been kept away.

“I am receiving similar complaints from across the country on phone, but what can I do alone?” he said.

A spokesman for the Election Commission said it would act on any written complaints about the lack of opposition presence at polling centers.

The deadly clashes in the southeast of the Muslim-majority country broke out between workers of the Awami League and its opponents, led by the Bangladesh Nationalist Party (BNP) of former Prime Minister Khaleda Zia, amid allegations of vote rigging.

One of the victims was an Awami League supporter while the other was from an alliance partner, a government official and a politician said. Media said five people had died across the country in poll-related violence.

The BNP boycotted the last election in 2014 claiming it wouldn’t be free and fair. The party has been hobbled by the absence of Khaleda, 74, who has been in jail since February on corruption charges which she says are politically motivated.

Hasina and Khaleda have alternated in power for most of the last three decades and this is the first election the BNP has contested without its leader.

It stitched together the National Unity Front alliance with smaller parties, but has alleged its supporters and candidates faced attacks and intimidation, including shootings and arrests, at the hands of ruling party activists during campaigning. Some BNP leaders and a European diplomat said they feared the election would be rigged.

Hasina’s party dismissed the accusations, saying the opposition has been making “one false allegation after another for months prior to election as polls show a landslide victory” for the ruling party.

“I believe that people will cast their votes in favor of Awami League to continue the pace of development,” Hasina told reporters in Dhaka. “The ‘boat’ will surely win. I believe in democracy and I have confidence in the people of my country.”

She has already invited foreign journalists and poll observers to her official residence on Monday, by which time the election result will be known.

Over the same period, annual sales of its economic mainstay, the garment industry, nearly tripled, with garment exports worth $30.6 billion in 2017/18, making up 83.5 percent of total exports. One of Hasina’s top jobs if she retains power will be to address demands by garment workers for a higher minimum wage.

At a polling booth set up in a high school in old Dhaka on Sunday, some were afraid to comment on the polls, describing an atmosphere of fear.

A middle-aged businessman who declined to be named said: “I am here to vote, but my family says, ‘what’s the point?’ The ruling party will come back in power in any case.”

Hasina has been praised internationally for providing refuge to Rohingya Muslims fleeing persecution in neighboring Myanmar, but her government is accused of suppressing dissent and jailing critics.

She has faced accusations in the West of increasing authoritarianism. Her son, Sajeeb Wazed, told Reuters on Saturday Hasina regarded such accusations as a “badge of honor”.

The United States, which has urged Bangladesh to ensure the vote is free and fair, said opposition party candidates had “borne the brunt of most violence” in recent weeks.

After intensive efforts by the BNP to get Khaleda out of jail failed, her son, Tarique Rahman, who is wanted in Bangladesh accused of masterminding a 2004 plot to kill Hasina, appealed to women, who make up nearly half the 100 million voters, to help get his mother out of jail.

"This is an important election, but the condition is not peaceful in the country,” said Monir, a teacher at a madrassa.

“The opposition has not been able to exercise its responsibilities properly. They are afraid.”