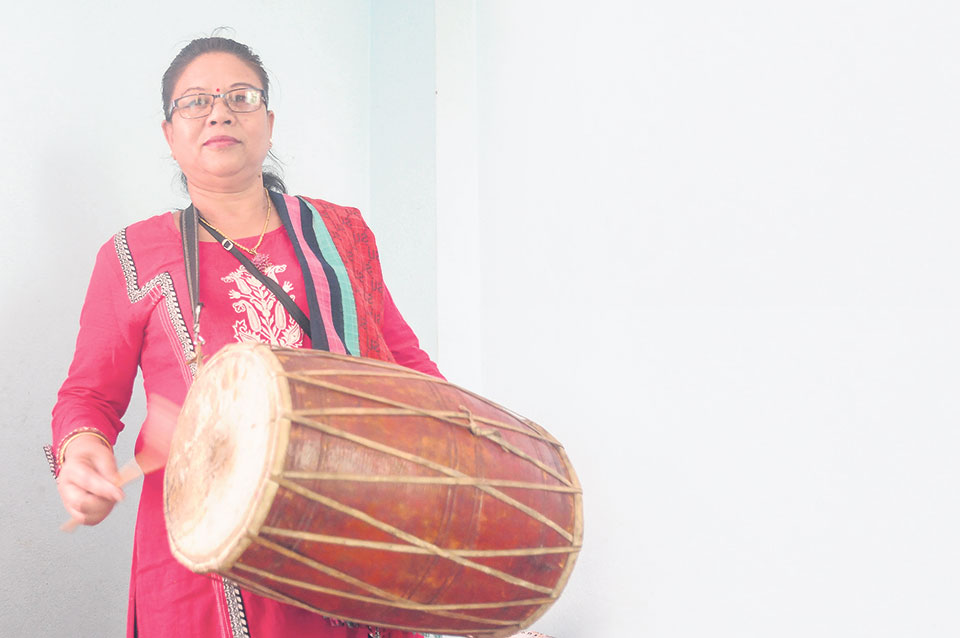 Playing a musical instrument on stage for the first time might seem like a moment of great pride but it definitely wasn’t so for Nani Chori Bajracharya who started playing the Dhime baja, a drum like instrument, when she was 14 years old. It was back in 2032 BS and women at that time were not allowed to touch any musical instruments, let alone play one.

“I still remember my first stage performance. The next day, I could not walk on the streets because a woman performing in front of an audience was considered shameful,” says Bajracharya who is the first woman in Nepal to learn the Dhime baja. The very next day of her first ever stage performance was extremely humiliating for her and things didn’t get better as the days passed. Many a times she even had to cover her face while walking. “Young men would whistle at me and I was treated like I had committed a sin by performing on stage,” she says adding that she wept and cursed herself for being born a woman.

However, her father, an instrumentalist himself, encouraged her to keep learning and playing the Dhime baja. When Bajracharya was in her teens, not everybody could learn or even teach a musical instrument. Music was an extremely sacred affair. “My father could play Dhime baja but was not allowed to teach me. So he requested his gurus (teachers) to help me learn this instrument,” says Bajracharya. His gurus were, however, not very willing to guide a young girl. “Out of the four Gurus that my father had, only one agreed to teach me and that too quite reluctantly,” she says, the sadness of the memory still evident in her eyes.

Before the process of learning began, gurus had to perform a long ritual at a nearby temple. Only then would the new students be allowed to touch their musical instruments. After the rituals, these students would have to hold their instruments and reach the guru’s house on foot. Since girls were not allowed to play the Dhime baja, they were obviously not supposed to be seen walking down to the guru’s house from the temple in public.

So at the temple, the guru told her father that though he had decided to teach his daughter this instrument, he was against women playing in public. He told her father that he would teach Bajracharya inside the house but displaying the skill to the world was strictly forbidden.

“My father begged them to let me walk back from the temple holding the Dhime baja along with the other boys,” says Bajracharya. Finally, after a lot of pleading, they allowed Bajracharya to walk to her guru’s house holding the musical instrument. That day, Bajracharya recalls her father telling her that the society would definitely criticize her but they would also see her play and realize that she was talented. “He told me to be strong in order to help other women in the future,” she says.
On hindsight, it was the walk back from the temple to the guru’s house that taught her an invaluable lesson besides giving her the confidence to stand true to herself. “I believe it was then that I realized I would have nothing served on a platter and that I would have to fight for some basic rights,” she says.

Playing the Dhime baja was a part of the Newar culture and people mostly learnt to play it to perform in different jatras that happened in the valley. But Bajracharya was never allowed to play at such occasions. “They said girls were sacred and that they had to be protected. And girls were somewhat caged inside their homes and with it so were their skills, intellect, and talent. That’s how it was back then,” says Bajracharya.

However, her father was adamant in exhibiting his daughter’s talent to the world. He took her to perform on stage on various occasions. Bajracharya distinctly remembers an occasion when they had to perform at the ‘Nach Ghar’, an auditorium in Kathmandu. “My father had to take special permission to allow me to perform on stage. Women playing a musical instrument were unheard of back in those days,” she says adding that she received a lot of shocked reactions for her performance. People were impressed by the fact that a girl could play so well.

But her journey, despite her father’s support, was far from easy and there were times when she wanted to give it all up. She often felt that the struggle was worthless. “I knew my father wanted to change the society and, for him, his daughters were his primary agents of change,” she says adding that it all felt a bit too much at times. Bajracharaya recalls a time when she was performing on stage with her father and people in the audience started throwing paper balls at her. Bajracharya’s father simply looked at her and told her to keep playing.

During the initial days, Bajracharya confesses she also suffered from stage fright. The fright however, was unlike what most people feel on stage. It wasn’t just nerves. “I was scared that people would throw stones at me. I was scared to show my face after performing on stage. I was scared of being a woman in a patriarchal society who was not appreciated for her talent,” she says.
However, she continued to play the Dhime baja on stage. “I thought of all the troubles my dad and I had gone through merely for me to learn this musical instrument. I decided to prove to those men that women too could play and that we could even be better at it than them,” says Bajracharya.

Indeed, her father was her source of strength in every sphere of life. He taught her that good always wins over evils. He was the one who told her, before every stage performance, to be brave and to hold her head high. At times, Bajracharya says, his voice was enough to help her overcome what little hesitation she felt before picking up the instrument. “He once told me to remember the faces of those who were criticizing me because they would be the ones praising me in a few years. And that is what happened,” says Bajracharya.

The times have definitely changed and now there are many women who proudly play the Dhime baja and are appreciated for it. When Bajracharya sees little girls playing musical instruments, she is reminded of her own tedious and often frightening journey but it also manages to bring a smile on her face. It makes her realize her father’s battle against society’s perception wasn’t an ill-timed one. It is because of him that her own granddaughter can today boldly declare her love for music and pursue a career in it, if she wishes to do so.

KATHMANDU, Jan 22: All preparations for Subisu CAN Info-Tech 2018 have completed, Federation of Computer Association of Nepal (CAN Federation)... Read More...

KATHMANDU, March 15: Conflict victims staged a sit-in program for an hour in front of the Truth and Reconciliation Commission... Read More...