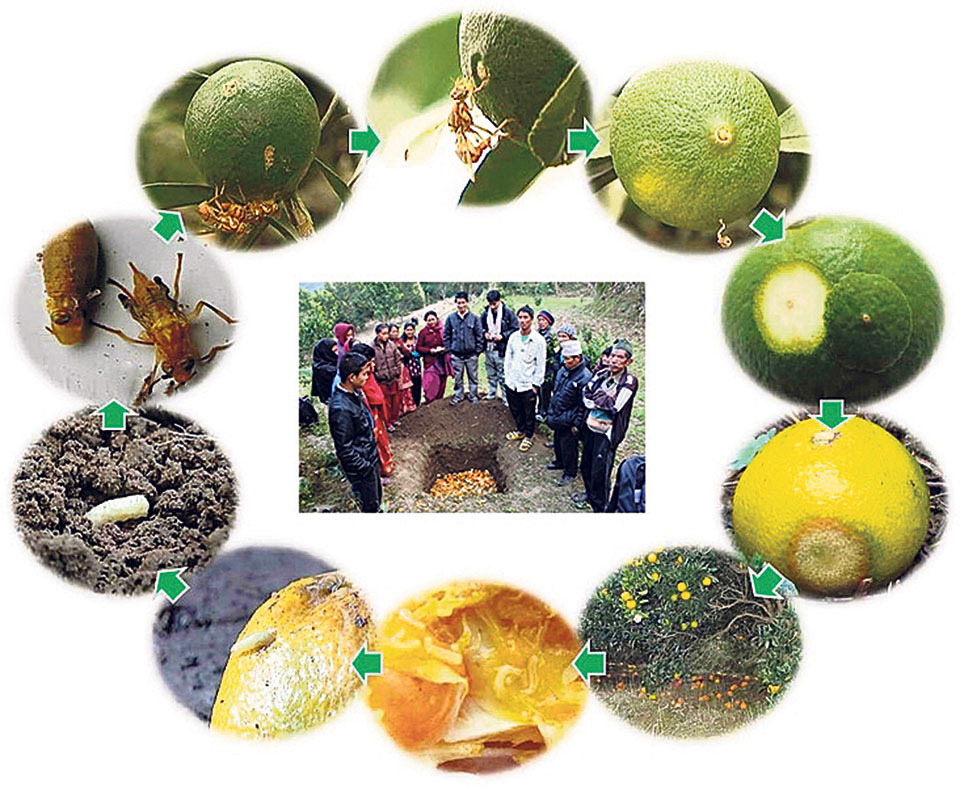 SINDHULI/RAMECHHAP, May 1: Junar, a type of citrus fruit, farmers of Sindhuli and Ramechhap districts are worried as they fear Chinese citrus flies will infest fruits in their orchards like in the past years.

Citrus fruits in these districts were attacked by Chinese citrus flies which infest the fruits with larvae, causing the fruit to rot. As the infestation has largely affected farmers since the past year, farmers seem worried that the same case will repeat this year as well.
“The problem was sparsely seen four years ago. However, the last year was catastrophic,” Beg Bahadur Gaudase Magar, a farmer and chairperson of Ward 4 of Golanjor Rural Municipality said, adding that he could sell only Rs 300,000 worth of fruits last year, down from Rs 450,000 two years ago.

“Although my case was that bad, many farmers had to bear unprecedented loss due to the infestation.  I am worried that the problem will escalate this year. It seems that the infestation cannot be tackled with a small budget. That is why we are expecting help from the central government,” Magar, who has 300 trees in his orchard in Tinkarnya, said.
Tinkanya area produced 1,200 tons of junar worth Rs 70 million in FY 2015/16. However, production fell to 700 tons, causing income to plummet by half according to assistant coordinator of the board of director of the Junar Super Zone, Lok Bahadur Ale.

Likewise, 400 out of 750 fruit baring trees in Yogendra Thapa's garden were found to be affected by citrus flies. “After the problem was diagnosed, I, as suggested by technicians, wrapped the infested fruits with plastic and buried it so that the larvae would not live,” said Thapa.

With the problem spreading toward Ramechhap, which is considered second best in the country for cultivation of mandarin oranges, many farmers in the district have given up cultivation fearing further losses.

“Despite our efforts, the citrus flies continue to destroy our fruits. We were left with no option but to cut down orange trees and cultivate other fruits. I have now cultivated pomegranate,” Bodh Raj Adhikari, who runs Adhikari Fruits and Nursery in Manthali Municipality, Ramechhap, said.

Junar is cultivated in over 1,000 hectares of land in different parts of Ramechhap.
“Although we used to earn up to Rs 500,000 annually in previous years, it will be hard to make even half of the amount if the infestation is not controlled,” said Laxman Tamang of Okhreni.

The citrus fly first affected fruit gardens in China. It then moved toward Bhutan. From there, it entered Sikkim of India and then to eastern hills of Nepal, affecting farmers of a number of districts in the country.

While citrus flies have been causing distress among farmers in Nepal and surrounding countries, experts say that the flies are attracted toward protein secreted in the sap of fruit trees. “The infestation can be controlled if protein mixed with insecticide is sprayed on the plants during April and May,” said Dev Raj Adhikari, a senior crop conservation officer,

DAMAK, July 22: Farmers of Jhapa are worried as their paddy saplings are drying up due to scorching heat and lack... Read More...

DHANKUTA, Jan 14: Farmers in Dhankuta have been worried after not getting suitable market price for their ginger as it... Read More...