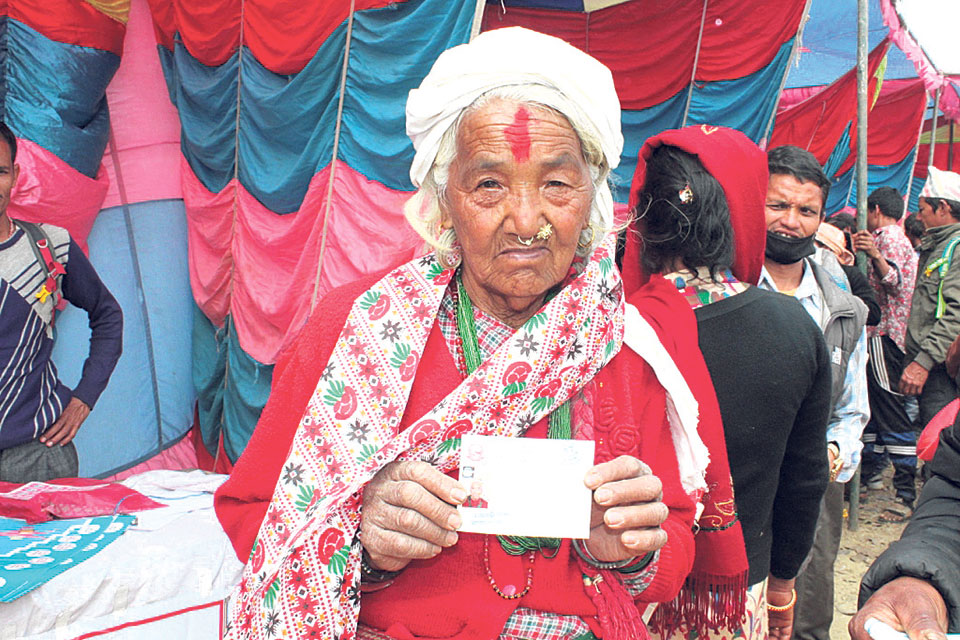 DHADING, March 3: Atimaya Damai hardly remembers how old she is. However, she assumes, she is 84. The local of Gajuri Rural Municipality-6 had no idea of the old-age allowance provided by the state, until recently. When she came to know of it a few months back and that she was eligible for it, she turned restless. The allowance amount would be sufficient for the old grandmother of several children in the remote village. She expedited inquiry into the allowance.

She learned that she was eligible for the allowance if she has a citizenship card. Damai did not have much idea about citizenship certificate even though she had seen such card earlier. “I had faint idea, how citizenship looks like. But I did not know that the card is so important,” she stated.
She was committed to get her citizenship card made. However, did not turn out be an easy endeavor. She tried everything possible to get the citizenship card and even reached the District Administration Office at the district headquarters.  But when could not provide all the documents required for making her citizenship card, she gave up.

“That was just a few months ago. I was first overjoyed over the news that I could get some money from the government and then I realized that to make the citizenship card was not easy for people like us. I kept quiet,” she shared stating she never hoped to make the card.

Though Damai had no hopes, destiny had something good for her. This week, some officials visited her village. They gathered people like her, who were eligible for citizenship but had not been able to acquire it. After completing certain process, they handed over citizenship cards to them, including Damai. Her happiness now knows no bounds.

“I feel very much relieved knowing that we will get some funds from the government. These funds will be crucial for my family in time of dire need,” she stated. She was brought to the citizenship distribution camp by her son on his back as she is not able to walk properly.

Damai is just a representative case. Dozens of elderly people shared similar stories at the camp. All of them were overjoyed to have it made it, at least now. According to Kanchhimaya Tamang, 75, getting citizenship has made her feel so empowered. A local of Sasirang, she said that with the allowance, she would not have to appease her sons for financial help.

“When you are very old, you become a burden to your family members. During such time, if you get some kind of financial security or allowance, that's like a boon,” she said adding that she feels relieved of her worries after getting the citizenship.

The visiting team has been providing not only citizenship but also other important documents like birth, death and marriage certificates. A huge number of villagers gathered at the camp for service. According to the team members, the camp will run for few more days depending on the number of service seekers.

Assistant CDO Dholakraj Dhakal informed that such teams have been deployed in several remote areas of the district. “Here in Gajuri Rural Municipality, people from Chhepang, Petare, Tarkek and Kiranje, among other areas have come for service. We have deployed similar teams to other areas as well. Services like this help citizens in areas that do not have access to transportation services to the district headquarters,” he said.

People from several community including Tamang, Chepang and Dalits have benefitted through the camp, Dhakal said. Those who remained historically neglected and marginalized are often unaware of state facilities. Such campaigns, he said, not only provide them services but also raise awareness about the state facilities that they are entitled.

DHADING, Feb 28: Atimaya Damai hardly remembers how old she is. However, she assumes, she is 84. The local of Gajuri... Read More...