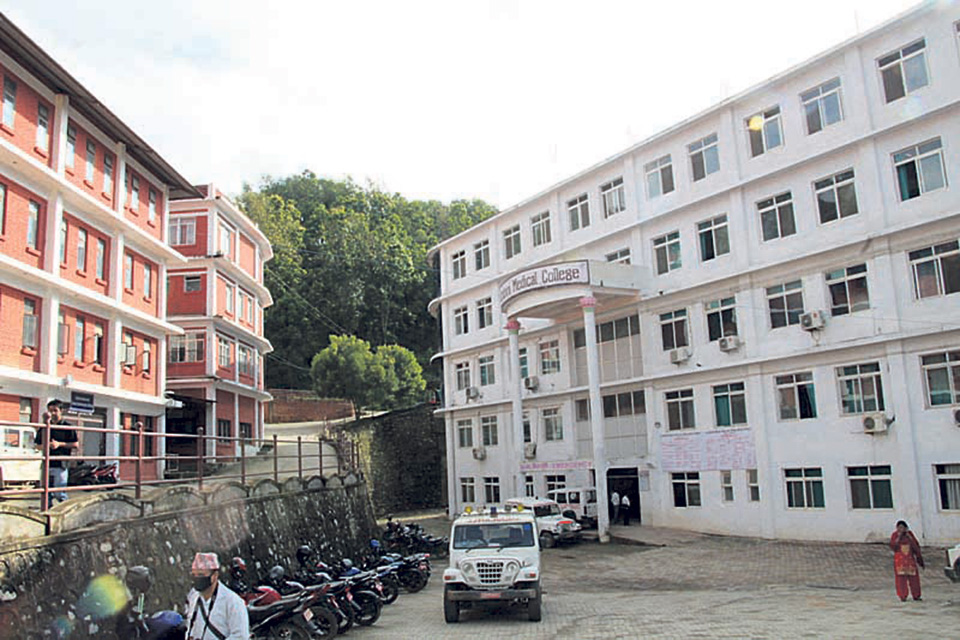 At the beginning of the new fiscal year in mid July the college was supposed to renew the deal with the government. However, it did not renew the deal. Though there are 25 birthing centers in Palpa, the medical hospital is most popular in the region. Women from Palpa and neighboring districts visit the medical college for safe delivery. The program was running at the hospital for the last five years.

On the other hand, United Mission Hospital which is popularly known as Tansen Hospital and is another popular hospital in the district has never introduced the program. Stating that the amount of the allowance is insufficient, the hospital had denied introducing the program since the beginning. According to District Health Office (DHO), despite regular insistence, the mission hospital never took interest in embracing government’s safe motherhood program.

Under the safe motherhood program, Rs 3000 is provided to new mothers in case normal deliveries while Rs 7000 is given to those delivering babies through surgery. Both hospitals claim that the amount is not sufficient to fund deliveries. Due to such concerns on the hospital’s part, the program has come to halting grind at the medical college, the DHO claims. Apart from the allowance, new mothers also get Rs 1000 as traveling cost. On top of that, every pregnant mother gets Rs 400 if she visits hospital for regular health check up. All these incentives are provided to promote health awareness and safe motherhood.

Lumbini Medical College reported loss in implementing it as a partner. According to Krishna Parajuli, information officer of the college, the program has been running at the hospital for the last five years and this has incurred significant loss to the college. “The government has given this facility to public. However, this is not mandatory to private institutions,” he said. “Moreover, now we are not keen to resume it not because we are free to resume it or not but because we are in loss,” he added.

He stated that the hospital had reported of the loss to the local bodies - concerned municipality and district health office. However, the matter was not taken seriously. “Even after reporting the matter to the concerned bodies, we were not told anything. If we are bearing loss every year, the matter needed to be discussed and rethought over. But nothing was done,” Parajuli said.

Parajuli meanwhile admitted that halting the program has directly affected new mothers. As huge numbers of women come to the hospital for deliveries, more and more women are being affected due to the closure of the program, he said. “The incentive amount meant a lot for them. It really matters,” he said.

The program was introduced by the government to lower infant and women mortality rate. And that had indeed made an impact. According to Madhav Gyawali, information officer at district health office, the medical college could resume the program if it wanted without renewing deal with the office.

“They could do it in coordination with municipality. But it is a matter of intention,” he commented. “The government has sent the budget to the municipal office now. Earlier the budget would be sent to the college. So, it’s for the local body to discuss and resolve the matter,” he added.

Ashok Kumar Shahi, chief of the Tansen Municipality, expressed disappointment over the decision taken by the medical college. He stated that the medical college should have felt morally obliged as it directly affects mother and baby’s health.

“The medical college has halted the services citing lack of funds. Even if that is the cause, they cannot simply terminate the service,” he said adding that “Institutions that are committed to health and operate hospitals cannot be irresponsible. They should not go against guideline and spirit of the government’s health policy.”

Shahi said that a program like safe motherhood must be upheld by everyone. It deserves support from every quarter, he stated. Women of not only Palpa, but also from neighboring districts Arghakhachi, Rupandehi, Parbat and Baglung come to the hospital for safe delivery. Health workers laud the role the program in dramatically increasing the number of women visiting to hospital for deliveries and for postpartum and post-natal care.

Fellow Nepalis, fear the government, fear as much for the country
2 hours ago
Govt concerned over Dehradun incident: Foreign Ministry
7 hours ago

Why the U.S. military would welcome a decisive 2020 election win
21 hours ago

76.7 percent patients win COVID-19 in Nepal as case tally soars to 168,235
23 hours ago
Pashupatinath temple’s Bhandari to be tried under cyber crime charge
22 hours ago

Kathmandu district alone has 42.34 percent of total active cases in Nepal
22 hours ago

2,508 people diagnosed with COVID-19 in Nepal on Saturday
12 minutes ago

Kathmandu district alone has 42.34 percent of total active cases in Nepal
22 hours ago