Cities to step up at U.N. to push climate fight, sustainable development 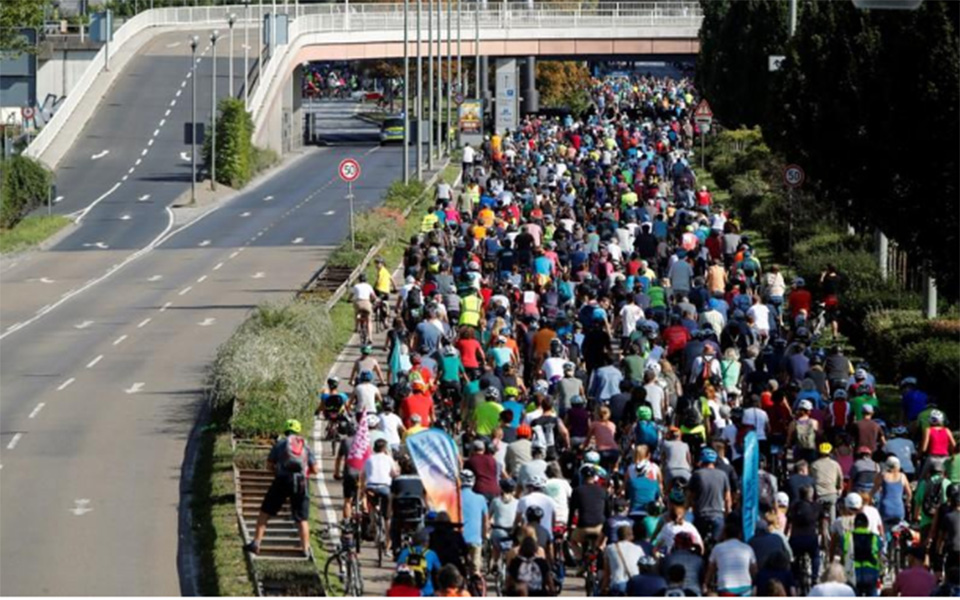 People take part in a bicycle demonstration on a highway to protest against climate-damaging cars, as the international Frankfurt Motorshow (IAA) opens for the public, in Frankfurt, Germany, September 14, 2019. REUTERS/Wolfgang Rattay

UNITED NATIONS, Sept 17:  As some world leaders question whether the world is facing a climate emergency, more than a dozen cities are stepping up to tackle global warming and sustainable development and will next week pledge to report their progress to the United Nations.

Sixteen cities will commit to implementing global goals to end poverty, inequality and other challenges by 2030 during the annual gathering of world leaders at the United Nations. They will sign a voluntary declaration drafted by New York City.

The set of 17 Sustainable Development Goals, unanimously approved by the 193 U.N. member nations in 2015, is a wide-ranging “to-do” list tackling such issues as conflict, hunger, land degradation, gender equality and climate change.

“We are living in a time when national governments are abdicating their responsibility on urgent issues. That is why cities are stepping up,” said New York City’s International Affairs Commissioner Penny Abeywardena.

U.S. President Donald Trump, who has described global warming as a hoax, dealt a blow to U.N.-led efforts to fight climate change when he pulled the United States from the landmark 2015 Paris climate accord.

Brazil’s President Jair Bolsonaro has also expressed doubts as to whether climate change is man-made and is ambivalent about the Paris accord, though he walked back a campaign pledge to quit the pact.

When asked about Trump’s position on climate change, U.N. Secretary-General Antonio Guterres told reporters on Friday that there was “an extraordinary commitment to climate action” in American society.

“Governments have much less influence than what people can imagine,” he said during a visit to the hurricane-devastated Bahamas. “The influence is today, more and more in relation to climate change, related to what cities, businesses and communities do.”

Under the Sustainable Development Goals, countries are encouraged to report annually to the United Nations on their progress. In 2018, New York became the first city to do so, submitting what it called a Voluntary Local Review (VLR).

“In a time when citizens feel overwhelmed by foreign policy, the VLR allows us all to remember that action starts at home,” Abeywardena said.

“Although a nation-state level commitment, the United Nations’ Agenda 2030 Sustainable Development Goals are universal. They are the closest thing we have to a global contract,” said Jan Vapaavuori, mayor of Finland’s capital Helsinki.

“We aim to highlight the importance of collaboration between cities and nation-states in achieving the global goals. However, where countries are unable to deliver, it is even more instrumental that cities step up,” he said.

New York City, Helsinki, Buenos Aires and 13 other cities will be the first to sign a declaration next week, in which cities pledge “to use the framework of the SDGs to do our part to help end extreme poverty, fight inequality and injustice, and work to prevent the harmful effects of climate change by 2030.”

A U.N. report in July warned that relentless global warming was threatening the potential success of implementing all the Sustainable Development Goals.

SRINAGAR, May 20: A prominent rights group in Indian-controlled Kashmir is advocating for the United Nations to establish a commission... Read More...