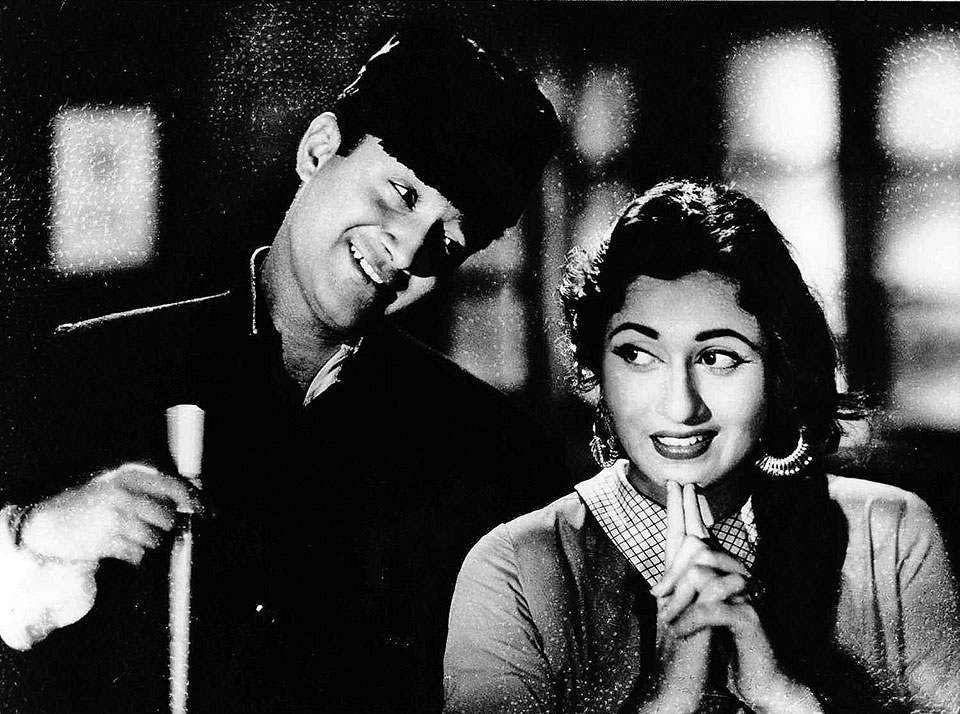 There were quite a few in the group who were crazy about Dev Anand. They were into watching all of his old black and white movies

Films and movies are dime a dozen these days very difficult to keep track of as to what’s going on where. Looking at all the advertisements on television reminded me of my first movie, a long time ago. I just remember going to the movie.  I remember the name being Madhumati, a black and white movie, that too after reconfirming it with family members who took me to the movie.  That was while we were still in Nepal. After sometime we left for Kolkata.

I believe my next film was Junglee. It was the first color movie I watched. I still remember the title screen. It said Eastman color.  I found that very funny.  I understood color, but Eastman? I had no clue whatsoever about it.  I understood earlier on that I did not like movies. All because of the violence, though it was much mild then, compared to what it is today. I liked the ones without violence and cartoons.  I remember during the late 60s some movies showed cartoons before the actual film started.

This fact was well advertised in the newspapers. During those days, cinema was advertised in the newspapers. I was interested in just watching the cartoon part of the movie. I went to see those movies.  They were screened on Sundays only.  I especially liked Disney and Looney Tunes cartoons and wanted to watch all the cartoons that were shown, but that was not possible. I still prefer cartoons to any movies given the choice.  While watching those cartoon movies, I was curious to know how the characters were made and how they walked and talked.

Giving in to my curiosity one day I asked my father.  This resulted in our visit to a museum. We walked around the museum and came to a place that demonstrated the technique of making cartoons. I still remember looking around and finding nothing.  I looked at my father and he pointed me to a small book.  He picked it up and turned the pages really fast.  I saw the character moving.  I took hold of the book and looked at the pages one at a time. I found there were only drawings of the same character in each pager.  I did not understand. So my father explained the process characters were ‘animated’. Knowing the process amazed me.  This increased my respect for the artist. I admired their painstaking effort at creating a cartoon and I enjoyed the creations even more.

I also admired Charlie Chaplin and his silent era movies. I still remember some of his famous movies. His slapstick comedy was very contagious. I found out much earlier that I also did not like action movies.  Anyway this led me to avoid watching movies later.  Later on baba’s friend DK Shahi kaka treated us to movies after the publication of each issue of Nepal Today.  The only thing was I did not like his choice of movies. I always tried to find excuses for not going to the movies. Sometimes I won and sometimes I just went and slept the whole time. Any way as I grew bigger my parents stopped asking. There was a difference as to which movies I did want to go see.  They were either children’s’ movies, cartoons, this list also included Bengali movies by Satyajit Ray. Then there came a time when I was studying in Nepal.

Those were the fun movie watching days with friends and cousins.  Saturday and we would be off to Nava Durga cinema hall, Bhaktapur. The trip to Bhaktapur was more fun than watching the movie itself. About eight or nine of us would board the crowded Sajha bus going to Bhaktapur. We would split in half and enter from both the ends.   At the final destination when the khalasi (ticket checker) asked for money, friends in front would point to the back and the back ones the front.  It usually turned out we ended up riding the trip for free. Sometimes the trick worked and sometimes we got caught and paid the whole fare.  Not paying was not the intention. The fun part was in confusing the ticket checker.

We usually reached a little earlier to catch the movie from the beginning.  So had to wait for the previous show to end.  We could hear all the dialogues outside. We made ourselves comfortable with some peanuts and start guessing the scenes being played inside.  As soon as we were allowed inside one of us would just struggle inside, as there were no seat numbers, and capture a bunch of seats for us to sit in later.  As soon as the movie started we compared notes right while watching the movies. Actually we were the noisiest group among others who were also equally noisy.  We just wanted to have fun.

I later found out that there were quite a few people in the group who not only liked Dev Anand but were crazy about him.  So obviously they were into watching all of Dev Anand’s old black and white movies. Now that was funny because I only remember watching black and white movies with beautiful songs during those trips. The other trip to watch movie was watching the footage of first steps on the moon.  So our group decided to go watch it. The only problem here was Ranjana Cinema hall was house full. The management was aware of this so they put up benches right in front of the screen that cost us 25 paisa each. All of us rushed in to see.  We could hardly sit for more than 30 minutes and then we all abandoned the movie after the ‘man on the moon’ footage completed. This is something I will hardly forget.

The other thing I remember well is the prank we played on the ushers of Jai Nepal cinema hall. When we wanted to watch a movie at Jai Nepal, one of the oldest members of the group, would make a phone call to the hall and ask for Garib Das ji, the owner of the cinema hall. Of course he would not be available. Still would request the person who handled the phone to keep ‘X’ number of tickets for him. So next all of us would just land at the cinema hall and tell the people that Garib das ji has kept the tickets for us and just enter and watch the movie. It worked a few times and then they realized and we stopped using that ploy.  I stayed in Nepal for about nine months. I had lots of fun during those times.

The other fun memory I have is of Saturday morning movies at Ashok cinema hall, as it was the closest.  It used to be so crowded one had to really care for their shirtsleeves while getting the tickets and getting inside the hall.  Getting inside despite the push and pull was a challenge and the final sitting on the seat felt like being in heaven despite the noisy fans. Ah those were the days! Now just memories!!  I am sure you are guessing why I am recounting my experiences since my last writing.

Well, I am just trying to use reflective practice as a way of studying my own experiences to improve the way I work.  It is often said that health professionals use this method and carry on learning from each experience.  I understand it is a great way to increase confidence and become a more proactive and qualified professional. Hence, thought of sharing it with all of you.  Hope you too will give it a thought.  Improvement never hurts, right parents?

Journey from Tiktok to silver screen

Actor Priyanka Singh is all set to debut from the upcoming Nepali film ‘Garud Puran’.” Her acting has impressed the... Read More...

Consumer price inflation remained stable at 7.26 percent as of mid-January: NRB
7 minutes ago

Nepse increases slightly by 4.62 points, while daily turnover drops as low as Rs 1.474 billion on Monday
51 minutes ago